Why the ‘spotlight effect’ stops us getting over setbacks at work

I was catching up with a friend recently when our conversation turned to work. She was dealing with an unusual dilemma at the office, stemming from a corporate retreat. As the final seminar drew to a close, everyone in her department had gathered for a group photo. But as they disbanded, she had found herself stuck, literally, to the department head. Somehow, her bracelet clasp had attached itself to his jacket, and she struggled to pry it loose. After what felt like an eternity, she was freed — but the embarrassment of the moment lingered.

“Everyone was staring at me,” she told me. “I felt completely mortified. I haven’t been able to shake it off.”

My friend isn’t alone in her feelings. It affects everyone, but many women, myself included, are hyper-aware of how our colleagues perceive us simply because we’re often outnumbered by men. It’s difficult to let things go and forgive ourselves. But as we navigate our professional and personal worlds, it’s crucial that we acknowledge our distress — and show more empathy for ourselves as we move past it.

While jewellery snafus are not very common in the workplace, how many of us have blurted out the wrong answer during a staff meeting, quickly fired off an email without catching a typo, or struggled through awkward elevator small talk with the boss? And how many more of us have replayed these moments in our mind for days, if not weeks, on end?

In making mistakes, it’s normal to worry your every flaw is being highlighted. There’s a psychological term for this: the spotlight effect. As its name suggests, the spotlight effect (or spotlighting) is the phenomenon in which we believe those around us are paying more attention to us than they really are.

Researchers at Cornell University showed how easy it is to fall prey to spotlighting through a series of experiments in which college students took part in an activity that would single them out; one, memorably, involved wearing a Barry Manilow T-shirt.

In that experiment, a student was asked to wear the potentially embarrassing T-shirt and then walk into a room full of classmates. Following this, the student was asked to predict how many people noticed who was on the T-shirt. This estimation was compared with the actual number of people who noticed. Though the supposed “Fanilows” in the T-shirt guessed half of their classmates would remember, in fact fewer than a quarter of them recalled it was Barry Manilow.

What does this research tell us? If you find yourself in an embarrassing moment, you are likely to feel you are the centre of (unwanted) attention. But fewer people are paying attention than you think. Simply by being aware that you tend to be more consumed with what you are doing than others are — the spotlight effect — can change how you think in the moment. Recognise that it’s a temporary feeling and that most people are not focused on you. It’ll make those less-than-perfect moments easier to handle.

Sian Beilock
How women can banish self-doubt at work 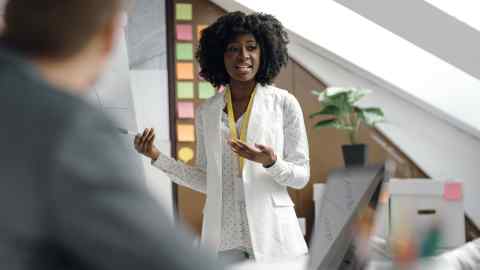 Of course, even knowing that all eyes are not on us doesn’t mean we won’t ruminate and give ourselves a hard time about screw-ups. That’s where practising self-compassion comes in.

Kristin Neff, an associate professor at the University of Texas at Austin, was the first academic to define the concept of self-compassion, more than 10 years ago. She explains that people are often harsher on themselves than on those around them. When a co-worker gives an incorrect answer during a meeting, you do not berate them for getting it wrong. But the same is not true for our reactions to our own behaviour.

First, self-kindness requires action. As you would care for a friend or loved one, you should calm and soothe in times of distress, instead of knocking yourself down.

It’s also important to recognise you’re not alone in making mistakes or having embarrassing moments. After a setback we often feel isolated, but everyone makes mistakes and our shared feelings unite us in our common humanity.

Finally, mindfulness is about being aware of your feelings — even the negative ones. Once you do that, you will be able to respond to yourself with care. One way to make yourself aware of those feelings is to write them down. Putting the negative feelings and worries on paper can help download them from your mind so they are less likely to lurk around in your head.

We live in an imperfect world. We will inevitably make mistakes at work or embarrass ourselves among colleagues. But true strength doesn’t come from being perfect. It comes from recognising our mistakes and treating ourselves with compassion.

It also comes from realising that, thankfully, most people are self-absorbed and not paying much attention to us. When we accept that, we’ll be able to shake anything off.

Get alerts on Personal development when a new story is published