When UK employees of Arcadis, a design consultancy, adopted Mind, the mental health organisation, as their staff charity two years ago, they soon found they became recipients as much as donors of support.

“Health and wellbeing are absolutely critical for us,” says Mark Cowlard, chief executive for the company’s UK and Ireland division. He says Mind was a catalyst for initiatives such as support for remote working, a health portal, yoga classes and mental health first aid training. “We are a people-based organisation, so we have to look after them,” he adds.

Arcadis, which has some 3,700 staff in the UK, is the top new entrant among large companies in this year’s Britain’s Healthiest Workplace awards. Its approach reflects the growing importance senior executives place on wellbeing and mental health support in their efforts to recruit, retain and motivate employees. The expanding number of interventions helps morale, individual health and collective productivity alike, while easing the longer-term burden on health and social care.

“Getting the balance of work and home life is really important,” says Cowlard, speaking by phone from home, where he works one day a week to reduce his commuting, spend more time with his family and set an example that his staff can follow. “What I look for in our people is the outcomes they deliver, not the inputs in spending long hours tied to a desk.”

Aggregated data collected for this year’s awards from more than 23,000 employees in 120 private, public and non-profit sector employers of all sizes across a wide range of industries highlight the need for interventions: ill-health at work is high and rising.

The number of respondents in 2019 who said they smoked, undertook insufficient physical activity or exceeded alcohol guidelines was flat or declining compared with five years ago. But those not eating a healthy diet rose to nearly 65 per cent of respondents (from 52.2 per cent in 2014), and the share who were obese was also up, from 15.4 per cent to 19.6 per cent.

The figures on mental health were particularly troubling: respondents reporting moderate or severe symptoms of depression more than doubled, from less than 4 per cent in 2014 to 8.5 per cent this year.

These conditions translate into a growing burden of squeezed productivity: since 2014 the number of days per year that employees were absent from work has risen from 2.7 to three on average. The levels of presenteeism — when employees turn up but feel unengaged and work below normal levels for physical or mental reasons — has jumped from 20.3 to 35 days.

The data also show how the impact of ill-health and its consequences vary among staff. The most striking trend is the disproportionate burden on the young. Employees aged 18-20, followed by those aged 21-25, eat less healthily, walk less, binge drink more, sleep less well and suffer more from depression than their older colleagues. They are also less engaged at work, share the values of their employer least, have greater concerns over their finances and work-related stress, and report higher absences and presenteeism than their older counterparts.

The figures support a growing focus on the importance of sleep. Employees who slept for less than seven hours a night in the survey had poorer eating habits, were more likely to smoke and had higher rates of obesity and depression. They were also less engaged with work and reported absenteeism or presenteeism of more than 40 days a year, compared with 30 for those who slept longer.

Just as significant as the quantity of sleep was the quality. Those who described “poor” or “very poor” sleep patterns reported a total productivity loss of 67 days, compared with 25 for those with “good” or “very good” sleep quality.

Shaun Subel, director of corporate wellness strategy at Vitality, the health insurer that developed and funds Britain’s Healthiest Workplace, points to a range of stress factors that may explain the trends. “The real issue is the encroachment of the workday,” he says. “People are starting earlier and ending later, with collaboration of teams across different geographies.”

He also highlights the challenge of “onboarding” junior employees, often without the confidence, referral networks or knowledge to identify and respond to stresses and pressures that can lead to mental health concerns.

Christian van Stolk, executive vice-president at Rand Europe, the consultancy that analyses the data, cautions over how we interpret the findings. “Is there greater incidence of mental health or are we driving up the levels of reporting?” he asks. “It may be about greater awareness of the issues.” 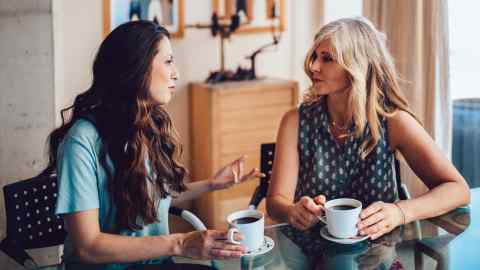 Economic self-interest is one motivation that is pushing private-sector employers to invest more in staff wellbeing. Non-profit and public-sector organisations — including National Health Service units — are also responding actively. The consumer advocacy organisation Which? — one of the top-performing new entrants to Britain’s Healthiest Workplace — has launched a network of volunteer Feel Good Champions, provides free healthy breakfasts and lunches once a week, and offers free fruit in its office to improve diets.

Given the focus on financial worries, Which? has launched an internal legal and financial advice team for employees, provides support around pensions and is offering monthly “personal challenges” to help staff set goals for saving and tracking spending.

Helen Webb, chief people and services officer at The Co-operative Group, says she is preparing to launch a programme offering payroll deductions and advances to help staff cope with financial shortfalls — a leading cause of anxiety. The retail and consumer services group has launched a 24-hour helpline for staff and their families, and other services targeted at its different businesses. It offers hydration, movement and nutrition support for sedentary staff in its call centres, for example: assistance in spotting mental health problems in its retail staff; and “night clubs” with sleep champions to share advice on eating, time management and peaceful rest for night workers.

The group is also keen to form partnerships and brief others on its approach. “This is what the Co-op should be doing,” says Webb. “We are a membership organisation, not a public limited company, so it is a space we should play in. We are very happy to share our knowledge. In strengthening wellbeing of our communities, we will help everyone.”

There are still many unknowns — in areas including untangling the causes of ill-health at work, getting employers to act, identifying the most effective workplace interventions, motivating employees to use them and making a direct connection to productivity.

Sir Cary Cooper, professor of organisational psychology at the University of Manchester, highlights many of the problems still to be solved. “We are seeing damaged organisations with a bullying culture, long hours, inflexibility and a glass ceiling,” he says. “It is not sustainable.”

Cooper points to intensifying work pressures, including far more demands from global employers and the burden of email. He highlights growing job insecurity and, in some sectors led by financial services, the uncertainties of Brexit. “I think that is partly responsible for high mental health issues,” he says. “The finance sector is worried to death.”

Cooper sees many companies investing more in employee wellness programmes. “The wellbeing culture has moved from being a nice-to-have to a big strategic issue,” he says. “How to retain millennials is becoming a bottom-line issue. You can go out of business if you lose people.”

More broadly, Cooper stresses the need to shift from a focus on eye-catching physical interventions to more structural ones centred on mental wellbeing. “It is not about beanbags, ping-pong tables and sushi at your desk,” he says. “It is about how you create a good environment so people are motivated to come to work.”

He argues that changing the culture of the workplace rests on identifying managers with “people skills” or “emotional intelligence”. “In recruiting future managers, EQ should be at least equal to technical skills,” he says. That may prove difficult to implement, but Cooper is confident that companies’ focus on this area will only grow. “Within five years lots of companies will see this as a chief executive issue,” he adds.