Pandemic creates a ‘learning crisis’ in parallel to health emergency

When Uganda shut its schools in April in response to coronavirus, Charles Obore soon began to see the toll on his pupils and fellow teachers. He only expects the strain to escalate in the months ahead.

Seven of the teenage girls he teaches are now pregnant and will almost certainly drop out of education, while many students who have returned to classes since August have fallen far behind in their studies.

“It’s been really terrible,” says Mr Obore, who teaches in a school in Kumi, a small town in the east of the country. “There has been a huge learning gap for our kids. Most of them have not been reading at home. It’s been hard for my colleagues who teach in primary school: the students have forgotten basic maths and how to read in English.”

While Covid-19 has imposed a heavy burden on schools globally, in lower income countries the effects are greatest. Aside from students struggling to keep up, Mr Obore has seen rising poverty, conflict and violence within their families, and says that he, like many of his peers, has had to find other sources of income because of salary cuts. Some have quit teaching.

The disruption of coronavirus is revealing and accentuating longer-term structural failings that have long impeded children in achieving their potential in schools around the world.

It now even risks limiting the capacity to restore the “old normal” of last year, let alone to “build back better” for the future as many organisations are currently demanding.

Jaime Saavedra, the former education minister of Peru who now heads the education global practice at the World Bank, says: “We are living the largest shock to the global education system in modern history. We have never had a double shock like this: the pandemic has led to long school closures and a global financial crisis.”

His agency estimates that up to 1.7bn students were out of school this year and 600m have not yet returned. It says the cumulative “learning loss” from disruption could reduce future lifetime earnings of children by $10tn, sharply impeding their opportunities in life and holding back broader economic development in their countries.

The World Bank suggests that 7m to 10m school-age children could drop out of school entirely as their families’ incomes fall following the pandemic.

The average duration of total “effective learning” — the amount of time spent in school — for students who return to class could fall from 7.9 years to 7.3 years of education without remedial action.

A detailed study published this year found significant long-term educational effects on Pakistani children who lived close to the faultline of the 2005 Kashmir earthquake, and were out of school for about 14 weeks.

The result was greater inequality, on average representing a loss of 1.5 school grades.

Kevin Watkins, head of Save the Children in the UK, says: “You’ve got a real lethal cocktail for education over the next decade.” He points to the risk in many countries of coronavirus-linked disruption leading to early pregnancies, child marriage, increased poverty and other pressures which will keep children out of school and harm their studies.

So what can be done? Mr Watkins calls for “rapid learning assessments” to understand the individual needs of children returning to school, and to offer catch-up classes based on their requirements, instead of their age or grade.

But these measures will require fresh funding, which he argues for the poorest countries alone will cost $30bn in the coming months. In normal times, education represents a modest proportion of government spending. With the economic shock after Covid-19, the danger is that schooling — which often struggles to demonstrate short-term “returns” — will fall ever further behind.

The charity calculates that countries including Ghana, Mauritania and the Gambia spend more than three times more on debt service to their commercial and government creditors than they do on primary education. Without additional deferrals or waivers, any fresh financial aid they receive will be diverted from education and other social needs to servicing interest payments.

If domestic funding is constrained even further, the financial squeeze and the competition for aid will limit external sources of support. Last month, the UK cut its international development assistance from 0.7 per cent of gross domestic product to 0.5 per cent.

It bode ill for the UK’s 2021 presidency of the G7 summit and its role as co-host of the replenishment conference for the Global Partnership for Education (GPE). This multilateral initiative is seeking $5bn in extra donor support for schooling in poorer countries.

Multiple other school-related programmes and organisations are vying for public money, include Education Cannot Wait, which raises money to support schooling for refugees.

There are also discussions over an International Finance Facility for Education via the capital markets, backed by governments, and channelling private and philanthropic support via separate social impact funds such as the Education Outcomes Fund. 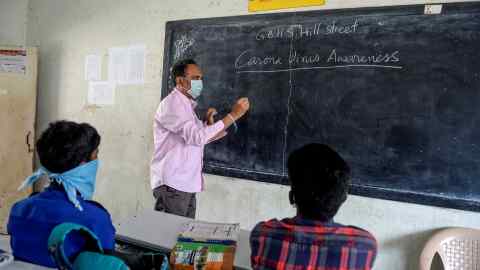 Yet there is little consensus on how to allocate funding between intermediary organisations, or how to spend it. The World Bank stresses the need to tackle “learning poverty” — basic numeracy and literacy by age 10.

Others highlight pre-school years, school feeding programmes or enhancing practical, technical and vocational skills to align older students more closely to the needs of the future workforce. The UN’s sustainable development goal for education for 2030 identifies 11 objectives, while Unesco has stressed the importance of social-emotional and behavioural alongside cognitive learning.

New mechanisms are emerging to help. Alice Albright, chief executive of GPE, says: “It’s hard, and it would be inaccurate, to say ‘here’s the silver bullet in 88 countries’.” She stresses that governments are best placed to identify their own needs, while her organisation offers funding and support to share best practices.

Separately, the UK’s Foreign & Commonwealth Development Office helped convene the Global Education Evidence Advisory Panel with the help of the World Bank. The Panel launched an assessment of cost-effective ways to improve learning for lower-income countries.

Top ranked were programmes providing information to parents and children on the income-earning benefits of education, followed by interventions to improve teaching.

Yet Karthik Muralidharan, a professor at San Diego’s University of California, warns that because many teaching interventions fail to work at scale, administrators should invest more in monitoring and evaluating their effects.

David Moinina Sengeh, education minister in Sierra Leone, which last year committed a third of government expenditure to education with a particular focus on girls and the rural poor, adds that a learning crisis is taking place in parallel to the health crisis. “If we fail to address that, we risk undoing a lot of the advances we have made. We need to ensure the next generation is equipped with the right set of skills to respond.”

Until more of his counterparts commit to greater funding and a focus on result, education risks not being built back better but rather left further behind.