Six men and women shaping how the world views Argentina

The men and women shaping how the world views their nation

María Eugenia Vidal: the governor tipped as a future president

During María Eugenia Vidal’s campaign to become the governor of Buenos Aires province last year, she highlighted how a vote for her would signify a break from the past. “So, I don’t look like a Buenos Aires governor?” Vidal famously asked in one campaign ad. “We’re off to a good start.”

It was also a strong finish. The former deputy mayor of Buenos Aires went on to win the governorship of Argentina’s most populous province, becoming the first non-Peronist to hold the job for 28 years.

Her success was at least in part because she went out to meet voters. While her competitors preferred to campaign from television studios and pinned their chances on old clientelistic networks to get out the vote, Vidal prioritised direct contact with constituents, a trend she has continued since taking office.

Vidal now faces myriad challenges governing a province known for its rough-and-tumble politics. But many are already talking about the 43-year-old as a future candidate for the presidency. After all, Mauricio Macri the former mayor of Buenos Aires, made a similar transition.

Ángel Correa: the footballer who has overcome adversity

One of the Argentine players on pitches abroad is Atlético Madrid’s Ángel Correa, renowned for his potential to dribble past opponents and wriggle out of tight spots, leaving spectators open-mouthed. 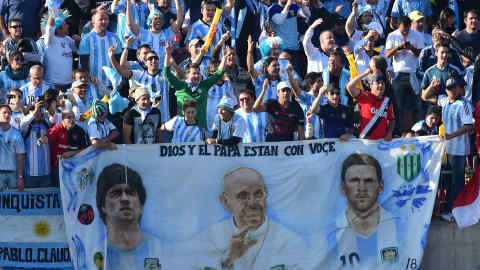 Hailing from Rosario, Argentina’s second city and Lionel Messi’s home town, Correa was key to Buenos Aires club San Lorenzo’s stellar 2013-14 season. The forward was then snapped up by Atlético Madrid, where he was hailed as a successor to fellow countryman Sergio Agüero. In July, it was reported Atlético had rejected a bid for him from Barcelona.

Correa, 21, grew up in poverty and as a child lost both his father and brother. Only two years ago he had heart surgery to remove a tumour, shortly before his move to Atlético. At the Rio Olympics he missed a penalty and Argentina were knocked out in the group stage. Yet that defeat was more a reflection of the financial and structural chaos enveloping the AFA, the country’s football federation, than the failure of any single player. Argentina will remain one of the world’s biggest exporters of footballers.

Santiago Mitre: the indie film-maker ready for the big time

A sudden rise of Argentinian film-makers on the international festival circuit two decades ago led many to talk about the dawn of New Argentine Cinema. But this scene quickly grew tired, as what was once innovative became cliché.

More recently, though, a younger crop of film-makers has emerged who are reviving local productions by shining a light into often-ignored areas of Argentinian life. Santiago Mitre, 35, made a splash with his 2011 directorial debut El Estudiante (The Student), an unflinching look at the underbelly of university politics. His next feature, La Patota (Paulina) was a provocative film that raised questions about the country’s judicial system and naive idealism of some do-gooders. It won the top Critics’ Week award at Cannes last year.

Now Argentina’s biggest movie star, Ricardo Darín, has signed up to be in Mitre’s next film, La Cordillera. Darín will play a fictional Argentinian president who has to deal with a complicated personal drama while at a three-day regional presidential summit in Chile.

Gabriel Rabinovich: the biochemist who wants to cure cancer

Gabriel Rabinovich this year became the seventh Argentinian to be accepted into the US National Academy of Sciences. Yet one key difference separates the 47-year-old biochemist from the previous six: he has pursued his entire career in Argentina. Rabinovich is disproving the conventional wisdom that scientists who want to make it big need to leave Argentina.

Rabinovich has dedicated his career to studying a protein that could be key to combating tumours and autoimmune diseases like multiple sclerosis and rheumatoid arthritis. He has identified a novel protein, Galectin-1 that is used by a number of tumour cells to in effect cloak themselves from the normal surveillance of the immune system. Blocking this protein could amount to a paradigm shift in the way doctors can treat tumours created by several types of cancers, including melanomas, lung and breast cancer. “We’ve identified one of the villains in the movie,” is how he puts it.

Rabinovich and his team of 30 at the government-funded National Scientific and Technical Research Council are working on galectin inhibitors including a monoclonal antibody that neutralises this protein in cancer; in pre-clinical studies with mice they have shown significant success. Now the scientist — who is more used to long hours in a laboratory — is spending his days building contacts with the pharmaceutical industry to create private-public partnerships and carry out clinical trials for the antibody. In May, Rabinovich helped organise a conference under the optimistic banner “Winning the war against cancer”. If he has his way, at least one battle in that war could be won in Argentina. “I’m proud that all this work has been done in Argentina with students from public universities,” he says.

Emiliano Kargieman: the entrepreneur who aims to democratise space

When Emiliano Kargieman launched his first two small commercial satellites in May on the Chinese Long March 4B space mission, he named one Fresco and the other Batata. The ode to the classic, simple Argentinian dessert consisting of cheese (fresco) and sweet potato jam (batata) was also a nod to the decidedly local origins of the twin satellites.

Argentina is no stranger to start-ups and many have credited the combination of a highly educated workforce that is used to dealing with crises and unexpected curve-balls as ideal for creating highly motivated entrepreneurs. Yet none has Kargieman’s space-wide ambitions.

It all began in 2010, when the former hacker — who founded his first company at 15 — came to realise the space industry was still working under old paradigms of building huge, expensive satellites that were out of reach for anyone but state actors and the wealthiest companies.

Kargieman, 41, founded his company Satellogic with the goal of opening up space by building satellites that cost “hundreds of thousands of dollars rather than hundreds of millions of dollars,” he says. Starting in 2013, the company launched three successful prototypes. And now, once Fresco and Batata — each weighing just 35kg — are fully operational, Satellogic will begin commercial operations before the end of the year, providing images to clients. Kargieman says he has already drummed up interest from numerous industries, with a particular focus on oil and gas, agriculture and even governments that want to keep track of critical infrastructure.

Satellogic currently has 70 employees, a number that is likely to grow in the near future — the company already has contracts in place to launch four additional satellites into space next year.

Soledad Nardelli: the chef who is reviving provincial flavours

When Soledad Nardelli became the head of kitchen at Buenos Aires’s Chila 10 years ago, she did what seemingly all fine dining establishments were doing in the capital at the time: she looked to Europe.

But one year later she made a dramatic shift on her menus, partly out of necessity: “Imports were blocked and we suddenly had to start relying more on national production,” Nardelli explains. The new situation suited her, however. “As a cook I was tired of always taking my cues from Europe,” the 37-year-old now says. So she went exploring. Nardelli travelled across the country, often with a camera for a television show on the Gourmet cable channel, to discover ingredients and flavours that were barely recognised in Buenos Aires. Nardelli — a rare woman on the Buenos Aires culinary landscape — became part of a group of chefs who sought to rebrand Argentinian food and demonstrate that there was more to local cuisine than the world-famous steak.

Critics began to notice. Nardelli has won numerous awards and Chila, located in the upscale Puerto Madero neighbourhood, came at number 21 in the 2015 Latin America’s 50 Best Restaurants rankings, the fourth-highest ranked in the country.

Late last year, Nardelli embarked on her latest challenge by also taking charge of the kitchen at Club Tapiz, a restaurant in the wine-producing province of Mendoza that grows its own vegetables and uses products only from the local region.

Nardelli may have spent a decade discovering flavours in forgotten corners of her country but, she says, the task is not finished. “We still have a lot of learning to do,” she says.

Get alerts on Americas society when a new story is published