Before disappearance from Hong Kong, the former ‘bagman’ was famed for political connections

Many of China’s most powerful families have their “bagman” — the dealmaker who helps arrange their business affairs and who rises in turn to great wealth on their coattails.

Xiao Jianhua has long had strong connections with the families of Communist party leaders, but he was much more than a bagman by the time he was spirited back to mainland China by Beijing’s agents on the eve of the Chinese lunar New Year, the most important holiday of the year, last Friday.

Living for the past few years in self-imposed exile at the luxurious Four Seasons hotel and apartment complex in Hong Kong, Mr Xiao had become one of China’s richest men, a multibillionaire in dollar terms with investments focused on banks and insurance.

According to the Hurun Report, the young man who began his business career selling personal computers near his old university was worth $6bn by 2016. Rupert Hoogewerf, chairman of the Hurun Report, says Mr Xiao has used his knowledge of capital markets and leverage to build a big empire. But, he says, it is extremely difficult to work out his wealth because “he’s a got a myriad of highly complex structures”.

“He’s considered to be extremely intelligent and extremely low-profile,” says Mr Hoogewerf. “Within investor circles, he’s pretty respected because he comes from Peking University so he’s not some hillbilly who’s gone into the business of capital markets.”

From his Four Seasons vantage point overlooking the busy harbour of Hong Kong — the city handed by the British to Beijing in 1997 in a deal that was supposed to guarantee autonomy within China for 50 years — Mr Xiao held court attended by a bevy of female bodyguards, managed his business affairs and represented the government of Antigua and Barbuda.

Mr Xiao has a youthful look, with a round face and an enigmatic smile. The 45-year-old nonetheless had a knack for getting in on large and lucrative deals.

He has been involved in business for decades, after showing early loyalty to the ruling Communist party with his stance as a student representative at Peking University. He opposed demonstrations in 1989 that culminated in a state crackdown and the killings around Beijing’s Tiananmen Square.

His businesses prospered. The December 2006 issue of Caijing, a respected Chinese financial magazine, was the only one that was ever pulped by censors. The reason was the cover story on the privatisation of Luneng, the state power company in Shandong, by a politician’s son named Zeng Wei, through a complex series of corporate shells. Mr Zeng was the son of Zeng Qinghong, a top official during the presidencies of Jiang Zemin and Hu Jintao who remained in power till 2007; Mr Xiao was owner of several of the shells.

Mr Xiao came from an educated family in a poor village in Shandong and won entry to prestigious Peking University in the mid-1980s, when China was rapidly recovering from three decades of radical communism.

While most bagmen rise and fall with a single powerful politician, Mr Xiao has worked on behalf of a number of powerful families, according to news reports.

He came to particular prominence during HSBC’s 2013 sale of a tranche of Ping An Insurance to CP Group, the Thai-Chinese conglomerate. Caixin magazine named him as the mysterious backer for CP Group’s purchase, a report that he denied but one that nearly torpedoed the $9.4bn deal.

That same year, Mr Xiao helped the sister and brother-in-law of President Xi Jinping offload shares in a company for the same sum they had paid for it a few years earlier, after Bloomberg published an investigation into the wealth of the Xi family and other Chinese leaders’ relatives. 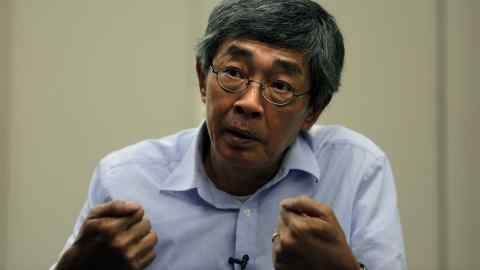 In a statement responding to a 2014 profile in the New York Times, Lu Yan, the spokeswoman for Mr Xiao’s Tomorrow Group, called her boss “a loyal student to Mr Warren Buffett’s theories” and denied he had made his money in any other way than by following the example of the Omaha-based value investor.

She wrote that after growing disenchanted with the student protesters, Mr Xiao “switched to the library” and upon graduation from Peking University’s prestigious law school, founded his business selling imported computers.

“The principle of compliance with laws and regulations and reasonableness is always on the top priority of the investment guidelines followed by Mr Xiao. Mr Xiao’s not being involved in any of the current corruption cases of several senior officials in China has indirectly proved the foregoing,” the statement said, in response to the New York Times’s reporting on Mr Xiao’s handling of the business affairs of important Chinese families.

“Now, under the guidance of Mr Xiao, the principle of compliance with law and staying-away from politics has become part of Tomorrow Group’s corporate culture.” Tomorrow Group’s website was inaccessible on Tuesday.

In the past two decades, dozens of prominent Chinese business leaders have fallen foul of the Communist party and been accused of corruption.

In 2015, the brief but mysterious disappearance of Guo Guangchang sent shockwaves through the ranks of the wealthy, with one executive calling it “an earthquake in financial circles” that should be read as a “warning that people must be more cautious than ever in their dealings with the government”.

The billionaire’s abduction and likely detention has parallels with the fate of the Russian oligarchs who prospered after the collapse of the Soviet Union before falling foul of the ambitions of President Vladimir Putin.

Nor is it the first time someone has been seized from Hong Kong by Chinese authorities since 1997.

In late 2015, five Hong Kong booksellers and publishers disappeared for months after being snatched or detained in various locations in Asia before reappearing in custody in mainland China.

One of them who returned to Hong Kong said he had been abducted in Shenzhen, just over the Hong Kong border, and announced that “confessions’” by himself and his colleagues were scripted by Beijing. Britain condemned the abduction of one of the other men from Hong Kong soil as a “serious breach” of the handover agreement.

All five had sold books critical of the Communist party and containing revelations about the alleged misdemeanours of Xi Jinping and other leaders.

Get alerts on Xiao Jianhua when a new story is published