My personal style signifier is dramatic conflict. I like discord between the appearance and the substance – for instance, wearing a pair of Nike trainers with a formal outfit. I love the idea of not being too serious – wit is often an unexpected part of my style.

The last thing I bought and loved was a 16th-century second edition of The Aldine Quintilian. I bought it from London book dealer Peter Harrington and chose it for its rarity and historical significance: Aldus Manutius, the founder of the Aldine press, was the first to print pocket books and to travel in order to find important texts to publish. He was also born in the birthplace of my own family – a small village 70km from Rome – and was the inspiration behind my collaboration with Fabio Gnessi, a collection of functional objets called Aldus. peterharrington.co.uk

And on my wishlist is a trip to Tibet. I was hoping to go there for my 50th birthday last year but of course wasn’t able to. It intrigues me for its aesthetic, philosophy and the simplicity of its sophistication. Ideally, I would spend a few weeks there, exploring the upper region with just a donkey and a sherpa, walking around the ancient villages and meeting the monks.

Beauty leads and beauty guides... this has nothing to do with their value

The best souvenir I’ve brought home is an original photo of the last two cannibals from Fiji in the 19th century. I came across it while I was there on my honeymoon. Although the facts are horrific, I was fascinated by the picture – one of them is wearing a necklace of bones. I later found out that one of the men in the photo is Udre Udre, a Fijian chief who is believed to have eaten up to 999 people in his life. He made it into Guinness World Records as the most prolific cannibal of all time. The photo rests on a chest in my bedroom in Rome, and my wife once said to me, “When I see the two cannibals, I feel at home.” So the picture is a sort of witness of our long-lasting relationship.

For a sense of escape, I go sailing. I design a lot of motor-yacht interiors but my heart beats for sailing boats. When I have the chance, I go on a friend’s boat or charter one – that’s when I really connect to freedom and peace, and it’s a way for me to forget about my problems.

The best book I’ve read in the past year is Zen in the Art of Archery by the German philosopher Eugen Herrigel. It’s about his experiences studying kyudo – a Japanese form of archery – when he lived in Japan in the 1920s. It’s a fascinating book that explores the idea of reaching perfection in everything you do – that’s the mantra I try to live by.

My favourite room in my house is the sitting room, which opens out onto a private terraced garden with olive trees and other greenery. It is my very own hortus conclusus: a tranquil and serene environment at odds with the city life that lies beyond it.

The best interiors advice I would give is that juxtaposition and beauty are the key to success. Beauty leads and beauty guides; if you collect beautiful things – and this has nothing to do with their value – they will always find a way to make a dialogue. Contrast is also one of the most important elements of design – for instance, rough and smooth, straight and curvaceous – these opposites can create balance and the kind of tension that adds electricity to a space. If you put an iPhone on the shelf of a 17th-century French cabinet, it won’t bother you because although they belong to different eras, they are both masterpieces, so will always talk to each other.

I feel naked naked without my colourful socks

The place I can’t wait to go back to is New York – I miss it dearly. I normally go once a month for work and have two big projects there at the moment. The energy you find there is indescribable; there’s really nothing like it. I love walking around the Upper East Side and taking in the mix of old-world architecture and new buildings. I always stay at The Mark Hotel – it’s like a second home to me. It’s in the same neighbourhood I work in and is comfortable, with great service. themarkhotel.com

My style icon is the Italian actor Marcello Mastroianni. He never tried to be cool yet had this effortless, casual and comfortable way about him. He always looked so understated and elegant wearing a suit and linen shirt.

The best gift I’ve received recently is a samurai helmet from the 17th century. My wife gave it to me for my birthday because I’ve always been interested in Japanese culture. It’s made of thin, lacquered metal with leather detailing and weighs about the same as a motorcycle helmet.

The last music I downloaded was “Looking at the Rain” by Eric Clapton. It’s a gentle, soulful ballad from his 1977 album Slowhand. I’m a big fan of his music and have followed him throughout his career – I think I’ve gone to more than 10 of his shows.

I have a collection of colourful socks. I started wearing them about 15 years ago and I now feel naked without them. I like solid colours that create a striking contrast with my outfit – I never wear white, blue or black ones. I prefer Italian socks – especially from Gammarelli in Rome – which are long, reaching the knee. Shorter ones just fall down and create wrinkles in the lower part of the leg. gammarelli.com

In my fridge you’ll always find a bottle of chilled Chardonnay – I don’t mind which label, I don’t have a favourite – and avocado, which I eat every morning on a piece of toast with a drop of olive oil. That’s been my signature breakfast for almost 10 years.

A recent find is Giannoni Marco, a fifth-generation sculpture studio I came across when visiting the town of Pietrasanta, in Tuscany, near the Carrara-marble quarries. It was there I discovered the ancient technique of the neoclassical sculptor Antonio Canova, who made his marble sculptures by replicating a plaster model he’d created beforehand. Marco Giannoni’s studio is still using this method 250 years later: it’s unbelievable. Via della Cisa 16, Pietrasanta, 55045 Lucca (tel: +390584-792 995)

The grooming staple I’m never without is Plum Japonais eau de parfum by Tom Ford. I’ve been wearing this scent for about eight years and love the soft blend of sweet plum, smoky wood and amber, with a slight spice of vanilla. Unfortunately, it’s been discontinued but I’ve found his Oud Wood to be a very close match.

An object I would never part with is my Moleskine notebook. I’ve been using them since university for all my initial sketches. I carry a pocket-sized one with me everywhere I go, sketching on planes, trains or even during the night if I wake up. It’s a way of remembering and preserving the impression I have of something at that specific time. If it’s an idea worth developing, I’ll take a photo of the sketch and send it to the office in Rome so that it can be explored further. I get through about one a month and sometimes look through old ones to revisit ideas from the past that could now be reworked and reused.

An indulgence I would never forgo is buying the best fresh produce. There’s such pleasure in eating the ripest berries, which can be sweeter than sugar. I believe eating well is part of my Mediterranean DNA. I like going to Olivo restaurant’s deli in London, which imports Sardinian produce and displays it on the counter immediately as it arrives.

My wellbeing guru is Pehr Henrik Ling, the inventor of the Swedish gymnastics movement. He created a system that focuses on the integration of healthy bodily development with muscular beauty. I have done these exercises every morning since I was a student in Stockholm. It’s like the ancient grandfather of Pilates – no machinery, just your body and the floor.

My favourite websites are those of auction houses, such as Christie’s, Phillips and Sotheby’s, as well as smaller regional ones. I am an auction junkie and enjoy the bidding process, so I’m always browsing the current sales, especially in the evening when I can’t sleep. It’s a bit like a training experience that I practise quite often – I can go through everything in two minutes and pick the few things I like for the right price.

If I weren’t doing what I do, I would be an archaeologist. I’ve always thought it would be fascinating to be on the edge of discovery. I love history and learning about what happened in the past – for me, it’s the most beautiful way to think about the new world.

READ MOREThe Escape issue
How To Spend It in... Brittany 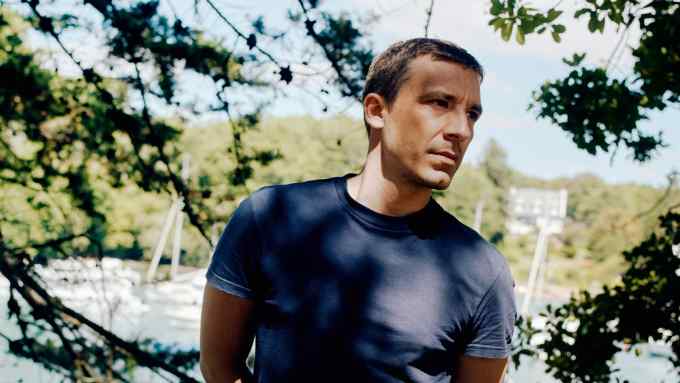