The state of the It bag

Which handbags hold their currency when we rarely leave the house?

Handbags have never felt so superfluous. My pre-pandemic go-to – a black, rigidly oblong, logo-free number from Lemaire that doubles as a cross-body and slightly oversize clutch – has been sequestered in its padded white cotton sleeve these past 11 months, with only brief airings over fashion weeks in September. It has been too nice, too formal to carry in a year of mud-sullied dog walks and perfunctory trips to the supermarket. These days, when I step out, I make do with coat pockets and the occasional canvas tote.

Many of my friends have similarly furloughed their handbags (and wallets) since the arrival of the UK’s first national lockdown last March. It’s perhaps little wonder, then, that handbags were among the hardest-hit luxury categories of 2020, with sales falling 19 per cent globally, according to Euromonitor International, compared to an overall luxury goods decline of 16 per cent. In the UK, the fall-off was even more severe, with luxury handbag sales down by a quarter.

But some bags did sell – and well. At auction, rare Hermès Kellys and Birkins have commanded record six-figure sums. And while overall revenues were down seven per cent at LVMH in the third quarter of 2020, the “exceptional” performance of Louis Vuitton’s “Since 1884” canvas collection and refreshed Capucines bags, as well as Dior’s initials-embossed Bobby crossbody, helped to propel fashion and leather-goods sales up 12 per cent year-on-year. The strength of the Chinese economy – which managed to grow even in a pandemic year – also assisted. So did an unexpectedly quick spending recovery in the United States, where lockdowns have been less strict and international travel has declined.

But the pandemic has altered what women want from the objects that hang from the crooks of their arms. Luxury analysts, department stores and resale websites all report a significant shift away from the trendy, Instagram-beloved, contemporary-priced bags that were gaining popularity prior to the pandemic in favour of costlier, more enduring styles from high-end luxury houses.

“We’ve definitely seen customers investing in timeless styles that won’t go out of fashion; customers who have saved up for a large amount of time,” says Lydia King, fashion buying director of Harrods. Among the winners are Prada’s sleek, sculptural Cleo, a refresh of the ’90s original that slips neatly under the arm and has developed a “huge waiting list” after it was seeded among big-name influencers, says King. New interpretations of other classic styles – Bottega Veneta’s plush woven pouches and shoulder bags; Dior’s lithe Saddle and practical “D”; Gucci’s spin on the 1960s Jackie – have all been strong performers. “Customers know they won’t go out of style,” she explains. Net-a-Porter, too, reports a shift away from trend-driven items and into more luxury products, with customers investing in “forever bags” from Bottega Veneta, Gucci, Saint Laurent and Loewe.

“People still want to buy those It bags,” echoes Natalie Kingham, chief fashion officer of MatchesFashion. While evening bags have underperformed, the e-tailer has seen strong demand for classic, hands-free satchels from Saint Laurent and Bottega Veneta, as well as more casual styles, such as basket bags and Ganni’s nylon cross-body.

“We had a bit of a moment [prior to the pandemic] where people were changing their bags every day,” says Kingham – a pattern she attributes to the constant influx of new, contemporary-priced bags on social media. “Women have gone back to having one great handbag that has everything.”

Luxury consignment websites have witnessed a similar pattern. Sasha Skoda, category director of women’s and kids’ at San Francisco-based The RealReal, says demand for bags priced above $1,000 is “growing much more” than those under $1,000. “Louis Vuitton, Chanel, Prada, Gucci, Hermès – those classic heritage luxury brands are doing really well,” she says, noting that Prada nylon bags from the 1990s and 2000s have seen their value double year-on-year, while sell-through prices for vintage Gucci Jackie bags have gone up by 35 per cent. “Some of the more mid-tier brands are still selling, but we’re not seeing the same spike in demand as for other brands.”

Why the shift? “People have saved more money and, instead of squandering that on fast fashion or lower-priced clothing, are investing in one quality, sustainable purchase that they can feel good about,” she continues. “Maybe people care a little less about trends.” Without fashion weeks and the barrage of street-style imagery that accompanies them, “that usual buzz of everyone being out and wearing the most recent collections has slowed down”.

Function, too, is becoming more important. While some women have downsized or even eliminated their handbags for much of the past year, the current need to ferry hand-sanitising gel, surface wipes, masks (sometimes for multiple family members) and laptops has led others to seek out roomier, more organised solutions.

That’s been the focus for designer Anya Hindmarch. Recent bestsellers include her Multi-Pocket tote range, which is available in multiple sizes, her Cycling backpack and – perhaps surprisingly, given that we’re grounded – her sold-out In-Flight bag. Each comes with external compartments with labels such as “Important Things”, “Water”, “Sunglasses” and (for the In-Flight version) pockets for passports, liquids and earphones. A similarly organised Working From Home tote has found customers among women who want to port their offices from room to room. Hindmarch says that she is surprised by the steady demand for bags, given that so few of her customers are leaving the house. “It’s not as doom and gloom as you’d expect,” she says. “Two things have happened really – a move back to safer ‘forever’ pieces and to the really practical.”

And yet one of the most successful bags of the past year – the one that the fashion search engine Lyst dubbed “the first It bag of the decade” and Oprah named as one of her Favourite Things for 2020 – does not fall neatly into either of those camps. The Telfar Shopping Bag is a simple top-handle tote made from faux leather and embossed with the initials of its maker, the New York-based, Liberian-American designer Telfar Clemens. Priced between $150 and $257 – or what Clemens deems his customers can reasonably afford – the “Bushwick Birkin” is favoured by an arty, socially progressive set that doesn’t typically buy into the game of status bags. Throughout 2020, the bags repeatedly sold out on Telfar’s website, and often fetched several times their original price on the resale market. “What makes the bag really different is that it is a status bag and the status has nothing to do with price,” Clemens told The Guardian last year.

How To Spend It
Which gear are you in? Two editors take on two very different approaches to cycling style 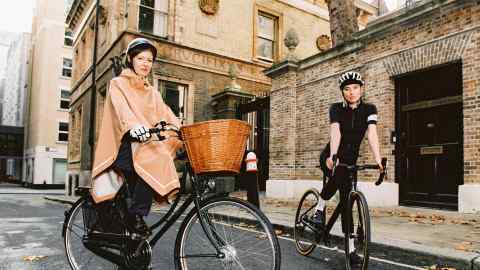 In August 2020, Telfar hosted an unlimited pre-order day for its bags, which were then delivered between December and January. Whether the bag will retain its “It” status without the element of scarcity remains to be seen. But it has proven that it’s not just major luxury houses who can succeed – and even dominate – the category.

As for me? I’m sitting this round of bag-buying out. I suspect that my beloved Lemaire will function just as well after the pandemic as it did before.