A US intelligence agency has spelt out for the first time how and why it thinks the virus that causes Covid-19 first jumped from animals to humans via an accident at the Wuhan Institute of Virology.

According to the report, analysts at the unnamed agency believe the dangerous nature of the science being carried out at the Wuhan lab and the lack of safety precautions make it most likely that it is the source of the pandemic.

However, the same report says several other agencies do not hold that view, though they were less confident in their own conclusions.

Despite the ongoing split among US intelligence agencies, the release of the report is likely to fuel the heated debate over whether China — and even the US, which funded research at the Wuhan lab — bears responsibility for the pandemic.

It comes just days before Anthony Fauci, the head of the US National Institute of Allergy and Infectious Diseases, testifies to Congress, where he is likely to be grilled on why he approved a $600,000 grant that was used for risky coronavirus research at Wuhan.

The report said: “Although the [intelligence community] has no indications that WIV research involved Sars-Cov-2 [the virus that causes Covid-19] or a close progenitor virus, these analysts note that it is plausible that researchers may have unwittingly exposed themselves to the virus without sequencing it during experiments or sampling activities, possibly resulting in asymptomatic or mild infection.”

This account would explain why nothing closely resembling Sars-Cov-2 has been identified among the coronavirus samples at the Wuhan lab. 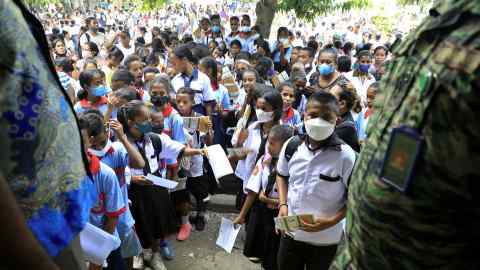 The report makes it clear, however, that without Beijing’s co-operation, US intelligence officials are largely relying on circumstantial evidence to construct their arguments.

The agency that believes an accident happened at the Wuhan lab does so because of the type of research that was being conducted there and the fact that some of it was being done at relatively low biosafety levels.

The Wall Street Journal revealed earlier this year that three researchers at the Wuhan lab fell ill in autumn 2019 with Covid-like symptoms. But the report said this did not in itself provide an answer to the question of how the pandemic started.

Several agencies continue to believe, however, that the virus is most likely to have jumped into humans directly from animals, pointing out that China did not appear to have any forewarning about the spread of the new disease.

The report said: “[These analysts] see the potential that a laboratory worker inadvertently was infected while collecting unknown animal specimens to be less likely than an infection occurring through numerous hunters, farmers, merchants and others who have frequent, natural contact with animals.”