Can the arts help save the planet?

With its calendar of international fairs, the art world has a serious carbon footprint. Simply ‘raising awareness’ is no longer enough

It’s a story of loss, really,” muses Himali Singh Soin, this year’s Frieze Artist Award winner, as she edits a new video in her east London studio. Mixing archival imagery with new footage, it shows the New Dehli-born artist and poet walking through the pristine Arctic landscape, wrapped in a foil blanket. “It felt like I was documenting something that would not exist soon after,” says Singh Soin, recalling her visits to both poles, which now form the backdrop to her video, titled “we are opposite like that”.

The work, which will be on display at Frieze London, is among a growing number of artistic responses to the climate crisis. They have ranged from Olafur Eliasson’s “Ice Watch”, which consisted of blocks of Greenland ice placed in the City of London and next to the Thames last winter, to the Golden Lion-winning operatic installation at the Lithuanian pavilion at this year’s Venice Biennale, which called to mind package holiday beach scenes.

But as predictions grow more alarming, it is clear that the work of raising awareness must be accompanied by real action. The renewed focus on the climate crisis has drawn attention to the art world’s carbon footprint, in particular that of the large institutions and the hundreds of international art fairs, including the likes of Frieze and Art Basel. It is hard to justify the existence of these huge pop-up events when considering their environmental impact, and some are calling for radical action. “It’s not about doing good or doing better,” says Sara Arnold of the environmental activist group Extinction Rebellion, who this month led a campaign to cancel London Fashion Week, “it’s about asking what is necessary.”

Now under the spotlight, some cultural institutions are taking action. “The climate and biodiversity crisis requires a profound rethink in business modelling and how we, as a sector, operate,” says Alison Tickell, founding CEO of Julie’s Bicycle, a not-for-profit organisation which is helping the UK’s cultural sector to become more environmentally sustainable. Since 2012, it has led the Arts Council England’s Environmental Programme, resulting in a 35 per cent reduction in carbon emissions across its national portfolio.

Following Extinction Rebellion’s 10-day occupations across central London in April, a group of artists and cultural workers led a protest in the British capital. The movement, known as Culture Declares Emergency, demands urgent collective action. It counts over 500 artists and organisations, from Antony Gormley and Cornelia Parker to Somerset House and Tate.

“We have reached a defining moment in the history of our planet and the cultural sector has a unique part to play in effecting change,” read Tate’s announcement in July, coinciding with Eliasson’s Tate Modern exhibition In Real Life. The institution has committed to reducing its carbon footprint by a further 10 per cent by 2023 — a modest target compared with the 31 per cent reduction already achieved since 2007 — and switching to a green electricity tariff across all four galleries.

But the announcement has raised some eyebrows. “I was surprised that they weren’t already supplied by a green energy supplier,” says Helen Turner, artistic director at E-Werk, a carbon-neutral arts centre and energy provider which opened this month in Luckenwalde, 30 miles south of Berlin. Like Tate Modern, it is housed in a decommissioned power station, which is now home to exhibition galleries, workshops and affordable studio spaces, spanning some 10,000 sq metres over four floors.

The impact of an institution goes well beyond the carbon it releases. It’s about the kind of cultural capital it trades

E-Werk isn’t like other post-industrial factories-turned-galleries, however. When the German artist Pablo Wendel acquired the listed building in 2017, he knew he wanted to revive its long-lost raison d’être. It is now home to his non-profit organisation Performance Electrics, which has been producing “kunstrom” or “art electricity” through projects like wind sculptures and solar-panel based performances since 2012. The electricity produced is sold on the national grid, and profits are reinvested in the arts centre.

As part of E-Werk’s launch, a quarter of the old power station was reactivated — using waste spruce pine woodchips instead of coal — creating enough energy to power the building and 200 local households. “Autonomy is a key point for us,” says Turner.

But the clout of an institution like Tate should not be underestimated. Its acknowledgment of the climate crisis carries a “legitimacy that is much harder to ignore”, says Tickell. In a cultural landscape that remains divided over the issue of oil company sponsorship of cultural institutions, the movement reinforces an ethical stance. The National Portrait Gallery — which, back in June, was urged to end its ties with BP in a letter signed by leading artists — declined to comment when asked whether it would declare climate emergency.

“The impact of an institution goes well beyond the actual carbon its building releases into the atmosphere,” says Anna Markova of the activist group Platform, which was instrumental in ending BP’s sponsorship of Tate in 2017. “It goes into the kind of cultural capital that the organisation trades.”

Transparency is key to establishing environmental targets. And while the progress of public museums and institutions like Tate is traceable through environmental reports and annual accounts, the art market is a different beast. In the past two decades, the number of annual fairs has increased from 55 to some 300, with attendance numbers in excess of 1.1m, of which up to 40 per cent are international visitors. An estimated one million round trips are required annually for shipping works to fairs, which generally last only two or three days.

At Frieze Fairs, director Victoria Siddall is quick to remind me of its involvement in the Green Visual Arts Guide, a pioneering piece of research commissioned in 2009 by the Greater London Authority, and produced in collaboration with Julie’s Bicycle, to help galleries, museums and art fairs to identify carbon reduction opportunities. While the report highlighted that the visual arts sector’s carbon footprint represents a small proportion of London’s total emissions, it insisted that art plays a key role in its reduction “because of its influence”. Two years before the guide, in 2007, Frieze art fair switched to recycled vegetable oil biodiesel, reducing its footprint by 60 per cent.

Those were forward-thinking steps for the fair, which has since been acquired by the entertainment giant Endeavor (owner of New York Fashion Week and Miss Universe) and expanded to New York and Los Angeles. Since then, adjustments have been made at Frieze London and Frieze Masters — from recycling the carpets to the introduction of a more effective renewable biofuel this year — but the tangible leadership of the Green Visual Arts Guide seems a thing of the past.

“Our priority for now is understanding our own impact and helping all of the galleries,” says Siddall, alluding to a panel discussion Frieze organised earlier this month on the subject.

She could not confirm whether Frieze would be joining the hundreds of cultural organisations who have declared a climate emergency. Doing so might seem a reasonable step towards accountability, but it would threaten the very existence of such fairs. As a spokesperson at Art Basel put it, “art fairs today are generally not environmentally friendly” — something which recycled carpets alone won’t solve. Given that every return flight from London to New York costs the Arctic an estimated three square metres of ice, it’s hard to see how the current art fair system is one we can sustain.

In 2007, over a decade before Greta Thunberg popularised the idea of “flygskam” or “flight shame”, the late artist Gustav Metzger urged his peers to boycott air travel with his Reduce Art Flight campaign in response to the growth of art tourism. The stakes of our individual choices — whether to take planes, for instance — are higher than ever, but that shouldn’t distract from the need for radical change at the level of companies and public bodies. “We have to put pressure on governments, city councils and parliaments,” say the artist duo Ackroyd & Harvey, who are founding members of Culture Declares Emergency. “Incremental small steps won’t be enough.” 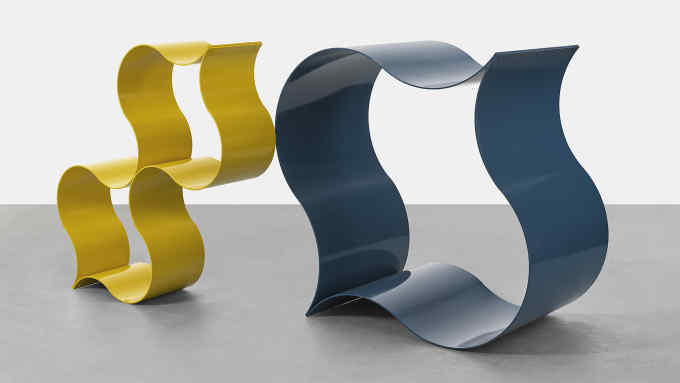