Its traditional aversion to risk has meant the legal profession has not been in the vanguard of new technology. But it is seen as ripe for disruption — a view that is based not least on pressure from tech-savvy corporate clients questioning the size of their legal bills and wanting to reduce risk.

As more law firms become familiar with terms such as machine learning and data mining, they are creating tech-focused jobs like “head of research and development” or hiring coders or artificial intelligence (AI) experts.

Change is being driven not only by demand from clients but also by competition from accounting firms, which have begun to offer legal services and to use technology to do routine work. “Lawtech” start-ups, often set up by ex-lawyers and so-called because they use technology to streamline or automate routine aspects of legal work, are a threat too. Lawtech has been compared to fintech, where small, nimble tech companies are trying to disrupt the business models of established banks.

A study by Deloitte has suggested that technology is already leading to job losses in the UK legal sector, and some 114,000 jobs could be automated within 20 years.

Professor Richard Susskind, a technology consultant and co-author of The Future of the Professions: How Technology Will Transform the Work of Human Experts, predicts unprecedented upheaval in a profession where the working practices of some lawyers and judges have changed little since the time of Charles Dickens. “One question lurking in all this is whether someone can come in and do to law what Amazon did to bookselling,” he says. “We won’t see anything as dramatic, but we will see incremental transformations in areas like the way documents are reviewed and the way legal risk is assessed.”

Big law firms are pouring money into AI as a way of automating tasks traditionally undertaken by junior lawyers. Many believe AI will allow lawyers to focus on complex, higher-value work. An example is Pinsent Masons, whose TermFrame system emulates the decision-making process of a human. It was developed by Orlando Conetta, the firm’s head of R&D, who has degrees in law and computer science and did an LLM in legal reasoning and AI. TermFrame guides lawyers through different types of work while connecting them to relevant templates, documents and precedents at the right moments. He says AI will not make lawyers extinct but “is just another category of technology which helps to solve the problem”.

“Clients are aware of [AI] and how it will benefit them and they are asking the tough questions of us. In the past year we have gone from being in start-up mode to having the rest of the firm banging on our door asking about this,” says David Halliwell, a litigation lawyer and director of knowledge and innovation delivery at Pinsent Masons.

In a sign of its potential success, lawtech has its own social scene. London-based serial entrepreneur Jimmy Vestbirk has launched Legal Geek, which organises events and meet-ups for lawtech start-ups, as well as hackathons and interactive talks.

Mr Vestbirk researched legal start-ups in San Francisco before setting up F-Lex, an on-demand paralegal agency in London. He is not a trained lawyer, but confidently describes the law as ready for disruption. “Artificial intelligence is a big component of that,” he says. “There is definitely a buzz now in the legal profession.”

As Professor Richard Susskind puts it: “In 10 years’ time if you were to look at the top 20 legal providers by revenue, half will be non-lawyers.”

Another AI application is Linklaters’ Verifi program, which can sift through 14 UK and European regulatory registers to check client names for banks and process thousands of names overnight. A junior lawyer would take an average of 12 minutes to search each customer name.

Meanwhile, Allen & Overy, along with Big Four accountancy firm Deloitte, has created a service to help banks cope with tough post-financial crisis regulations. MarginMatrix codifies the law in various jurisdictions and automates drafting of certain documents. The time to draft a document will fall from three hours by a lawyer to three minutes.

Other firms are using AI for discovery exercises in litigation, which can involve laborious hours of document word searches. US law firm Cooley recently used AI in a litigation dispute in which the technology identified relevant word concepts and clusters of words in 29m documents. This led to lawyers receiving a smaller subset of data where the program “machine-learnt” through predictive coding according to how it was classified. Mark Deem, a partner at Cooley, says the firm is open to using AI partly because of its client base. “Some of our bigger clients are in the tech world and therefore the lawyers are willing to embrace technology, and get it.”

One worry is that the “Big Law” business model, with its billable hours and partnerships, is not suited to incubating tech start-ups where experimentation is vital and potentially expensive.

Tim Pullan, founder of ThoughtRiver, a lawtech start-up, is typical of the new breed of innovator, although he says: “I guess we’re somewhat older than the kids down in Shoreditch.” He was a partner at London law firm Lawrence Graham until 2006 when he decided to work in Asia for Experian, the credit-checking agency. But later he set up ThoughtRiver, based at law firm Taylor Vinters in Cambridge, to address “core productivity issues” at the heart of the law. 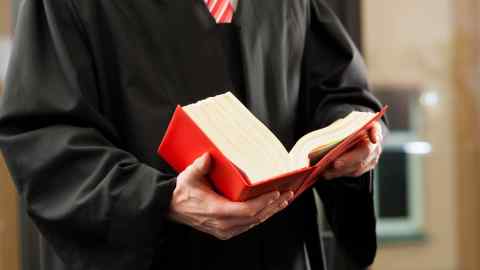 “I thought about it for years and homed in on one particular problem we thought we could solve,” he says. That area was legal contracts: some corporate clients might minimise risk by focusing on higher-value contracts and ignoring contracts under a certain value. ThoughtRiver’s software uses AI to scan and interpret information from all written contracts used in commercial risk assessments and presents it in a central online dashboard that enables clients to assess risk more easily.

Another firm, Riverview Law, is in partnership with the computer science department at the University of Liverpool. It has launched Kim, a virtual assistant designed to help legal teams make quicker and better decisions. Karl Chapman, Riverview’s chief executive, says Kim’s features include being able to suggest the best order in which to renegotiate a series of corporate contracts.