We’ll send you a myFT Daily Digest email rounding up the latest Brazil news every morning.

Brazilian President Jair Bolsonaro has accused the country’s political leaders of trying to oust him after he sacked his popular health minister, with whom he had clashed over how to handle the coronavirus outbreak.

The dismissal late on Thursday of Luiz Henrique Mandetta — whose professional competence drew comparisons with Anthony Fauci, the US health official who has become one of the most trusted faces of the country’s response to the coronavirus pandemic — immediately sparked protests and condemnation from across the political spectrum.

“Most Brazilians hope that President Jair Bolsonaro did not fire Mandetta in order to . . . undermine the need for social distancing,” Daví Alcolumbre, the president of the Senate, and Rodrigo Maia, the speaker of the lower house of Congress, said in a joint statement.

Mr Bolsonaro, who is among a handful of world leaders to question the seriousness of the coronavirus, reacted furiously, accusing Mr Maia of turning the nation’s governors against him and trying to “stick a knife” in the federal government.

“It seems that the intention is to get me out,” Mr Bolsonaro said in a TV interview. Local media reported that the Brazilian president claimed to have in his possession an intelligence brief alleging that Congress, some members of the supreme court and certain governors were plotting to oust him.

For weeks, Mr Bolsonaro has faced unrelenting criticism from across the political spectrum as a result of his downplaying of the Covid-19 outbreak, which has already killed almost 2,000 Brazilians.

The Brazilian leader has repeatedly urged the nation’s governors to end lockdowns so businesses can reopen and citizens can get back to work.

His approach, however, triggered a public spat with Mr Mandetta, a trained doctor, who backed world health guidelines on social distancing.

The two men also disagreed on the use of chloroquine and hydroxychloroquine to treat people with the virus. While Mr Bolsonaro has followed US president Donald Trump’s lead in promoting the drugs as a remedy for Covid-19, Mr Mandetta refused to sanction their widespread use, saying he “only works with science”.

The plot allegations are “part of Bolsonaro’s populist rhetoric and fit his repertoire: to create enemies, to display himself as a victim of the system, to provide simplistic answers to complex problems and not assume responsibility for the situation,” said Aline Burni, a political researcher with the Centre for Legislative Studies at the Federal University of Minas Gerais. 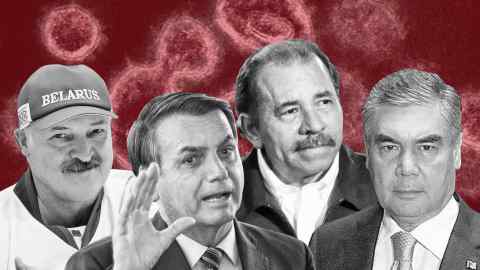 A poll released by Atlas on Thursday showed that 76 per cent of Brazilians opposed sacking Mr Mandetta, while 58 per cent disapproved of Mr Bolsonaro. A further 46.5 per cent were in favour of the president’s impeachment.

Mr Mandetta was almost dismissed by Mr Bolsonaro last week but was saved by a last-minute intervention from political heavyweights, including senior members of the military in the president’s cabinet.

Much of the tensions between the two men appeared to stem from Mr Mandetta’s popularity. “He is lacking a little humility to lead Brazil in this difficult time. I think he should listen to the president of the republic a little more,” Mr Bolsonaro said recently.

For his part, the former minister openly defied the Brazilian leader. Days after Mr Bolsonaro paid a highly publicised visit to a bakery in Brasília, Mr Mandetta told a TV station that such behaviour was the “wrong thing to do”.

He also said that Brazilians were confused by the mixed messages being sent from the different levels of the government.

Brazil currently has more than 30,000 confirmed cases of the Covid-19 disease and experts anticipate this number will increase substantially in the coming weeks. Mr Mandetta predicted a peak of cases later this month or early next month.

Immediately after sacking Mr Mandetta, the president appointed Nelson Teich, an oncologist, as health minister. In measured first remarks, Mr Teich appeared to back a science-based approach to tackling the virus.

There are heightened concerns about the impact of the virus on the nation’s densely packed favelas, where millions of Brazilians live without access to a steady water supply or proper sanitation.

Mario Marconini, a managing partner at advisory firm Teneo, said a “big issue” for Mr Bolsonaro was that Mr Mandetta was a former federal deputy poised to emerge as a political competitor. “This scares Bolsonaro a lot,” he said.

Get alerts on Brazil when a new story is published