Donald Trump is impeached for abuse of power and obstruction

Donald Trump became the third president in US history to be impeached when the House of Representatives charged him with using the power of his office for personal gain in a partisan vote that could be the defining moment of his presidency.

The decision on Wednesday night paved the way for a trial in the Senate, where Republican control makes it unlikely that Mr Trump will be removed from office — or that the tribal divisions afflicting American society will soon heal.

However, Nancy Pelosi, Democratic speaker of the House, sparked confusion about what comes next by suggesting that she might not immediately send the articles of impeachment to the Senate, in a possible effort to gain leverage over Republican Senate leaders who have favoured a trial without testimony from witnesses.

Following a day of often ferocious debate, the House voted almost entirely along party lines to impeach Mr Trump for abuse of power for pressing his Ukrainian counterpart to launch investigations into political rival Joe Biden and into debunked theories that Kyiv, rather than Russia, intervened in the 2016 US election.

The motion was passed 230-197. Two of the 233 Democrats in the House voted against the article of impeachment, while Tulsi Gabbard, the Hawaii Democrat running for president, abstained. All 197 Republicans opposed the measure. Justin Amash, a former Republican and now independent, voted to impeach Mr Trump.

The House then voted largely along party lines — 229-198, with one abstention — in favour of a second article of impeachment, which accuses Mr Trump of obstructing Congress by refusing to allow his aides to testify in the inquiry and for failing to provide documents to House investigators.

Mr Trump accused Democrats of trying to impeach him “from day one” of his presidency as he spoke to supporters at a rally in Battle Creek, Michigan, shortly after the vote.

“After three years of sinister witch hunts, hoaxes, scams, tonight, House Democrats are trying to nullify the ballots of tens of millions of patriotic Americans,” he said. “Crazy Nancy Pelosi’s House Democrats have branded themselves with an eternal mark of shame.”

The decision marked the first time House members had used their “most solemn powers”, as Ms Pelosi put it, since Bill Clinton was impeached in 1998. The first impeachment of a US president was of Andrew Johnson in 1868. Both Mr Clinton and Johnson were acquitted after a Senate trial. Richard Nixon resigned as president in 1974 as the House was about to impeach him.

As they prepared to vote, Democrats cast themselves as defenders of US national security, saying they needed to act immediately to prevent Mr Trump from soliciting foreign interference in the 2020 presidential election.

“If we do not act now, we would be derelict in our duty,” Ms Pelosi said. “It is tragic that the president’s reckless actions make impeachment necessary. He gave us no choice.”

Echoing charges made by Mr Trump, Republicans accused the Democrats of being “Trump haters” who were pursuing a “hoax”. They said Democrats had not proved Mr Trump had committed treason, bribery or the “high crimes and misdemeanours” that are the constitutional standard to remove a president.

Barry Loudermilk, a Republican congressman from Georgia, compared the proceedings to Pontius Pilate’s judgment of Jesus Christ, which led to his crucifixion.

“When Jesus was falsely accused of treason, Pontius Pilate gave Jesus the opportunity to face his accusers,” he said. “During that sham trial, Pontius Pilate afforded more right to Jesus than the Democrats have afforded this president, and this process.”

The likelihood that Mr Trump will be convicted in the Senate is low because a two-thirds majority is needed to remove a president from office. He would have to lose 20 Republicans to be convicted, which Mitch McConnell, the Senate Republican majority leader, said had “zero” chance of occurring.

Lindsey Graham, a South Carolina Republican senator and close ally of Mr Trump, said there was no chance that the Senate would vote to remove the president from office. “The impeachment Articles passed by the House of Representatives will meet a quick demise in the Senate,” he wrote on Twitter.

However, Ms Pelosi turned up the heat on Mr McConnell by saying she might delay sending the two articles of impeachment to the Senate, pending the receipt of further information on how a Senate trial would be conducted. 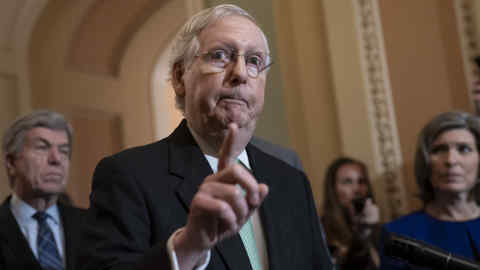 The House vote on Wednesday came three months after a CIA whistleblower sparked the inquiry by filing a report about a July 25 phone call in which Mr Trump put pressure on Volodymyr Zelensky, the Ukrainian president, to begin the probes of Mr Biden and alleged Ukrainian election interference.

Democrats were also alarmed at allegations that Mr Trump withheld $391m in military aid to Ukraine as part of a “quid pro quo” designed to urge Mr Zelensky to help him.

Mr Trump has castigated the impeachment investigation, claiming that the July 25 call was “perfect”. But Gordon Sondland, a former Trump donor who serves as US ambassador to the EU, told Congress in dramatic public testimony that there was a “quid pro quo”, undermining the denials from Mr Trump and his other top officials.

Ms Pelosi had long resisted opening impeachment proceedings against Mr Trump because she was worried it would help him win re-election. She reversed course following the revelations about the July 25 call — which came one day after Robert Mueller, then special prosecutor, testified before Congress about the Russia probe that concluded without any recommendation to bring charges against Mr Trump.

Mr Trump spent Wednesday retweeting comments from allies who accused Democrats of pursuing impeachment because they are angry he beat Hillary Clinton in 2016 and are worried about him winning re-election in 2020.

“SUCH ATROCIOUS LIES BY THE RADICAL LEFT, DO NOTHING DEMOCRATS. THIS IS AN ASSAULT ON AMERICA, AND AN ASSAULT ON THE REPUBLICAN PARTY!!!!” Mr Trump tweeted.

As the debate began, the White House delivered large Christmas cards to members of Congress. But there was a twist: in a separate envelope, they also handed out the fiery, rambling six-page letter that Mr Trump had sent to Ms Pelosi the previous day warning her not to proceed with impeachment.

“True story: there is a White House staffer going around the Senate delivering to each office, as a package, the incoherent, scathing Pelosi letter AND . . . wait for it . . . a giant 16x12 White House Christmas card (along with, implausibly, a second smaller Christmas card),” Chris Murphy, a Democratic senator, tweeted. “What a day.”

Video: Why Donald Trump is facing his most perilous crisis

Impeachment has put US on a risky path / From Margaret McGirr, Greenwich, CT, US