The coolest thing to wear this winter? Why, last winter’s clothes of course. Meet the brands making upcycling central to their mission

One hot July day in Paris, Vogue Ukraine fashion director Julie Pelipas headed to a haute couture show. She was wearing a baggy black T-shirt, chunky gold hoop earrings, deep-red leather mules and an old pair of black men’s suit trousers about five times her size, which she had pinned in at the waist so that two superfluous flaps of fabric stuck out like fish fins. Street-style photographers went into a frenzy. Pelipas received hundreds of messages. The once fusty concept of “upcycling” suddenly became “fashion”.

The oversized trousers were in fact a prototype for the stylist’s new brand, or “platform” as she calls it, Bettter. It launched in August and sells vintage men’s suits that have been modified to fit women’s sizes, using a specially developed algorithm to calculate how they need to be altered to maintain the original shape and proportions.

“It’s not just about redesigning, it’s about considering the proportions of all body types and translating that into a uniform that is satisfying for everyone,” Pelipas explains from her office in Kyiv. “We ask, how does it make you feel better?”

Indeed, the brand was born not only as a solution to the fact that 60 per cent of clothes end up in landfill or an incinerator within a year of being produced – but also out of a desire for Pelipas to feel at ease with her body. “I never felt comfortable in myself. I couldn’t deal with my height,” she says of her nearly 2m frame. But that changed when she discovered men’s tailoring. “One day I bought this $2 men’s suit from a second-hand shop in Ukraine,” she recalls. “I redesigned it for myself, and I wore it in Paris. I remember forgetting what I was wearing, I forgot even that there were clothes on me, because I was just so comfortable. This is how it started.”

Bettter’s mission isn’t to design “perfect” clothes but to make old clothes cool again. “There was a moment where I was asking myself, ‘Do you really want to start another brand? There are too many brands launching, no one needs this,’” Pelipas recalls. “But then I realised that I have a responsibility to do it, because I know this is how fashion should be in the future. I want to show people that upcycling isn’t just a patchwork thing, that it’s actually a super-cool thing. It’s playful and it’s so much fun. It’s the future.”

Pelipas isn’t the only one making old clothes feel luxurious again. A host of new brands are popping up with upcycling as their core USP. Bode started making workwear-style menswear entirely from antique textiles, and its pieces now sell in female departments due to popular demand. There’s also Marine Serre, which uses old cut-up jeans and knits for its “regenerated” pieces; Rentrayage, which stitches together vintage T-shirts, skirts and dresses; and Rua Carlota, whose patchwork knits are a social-media hit.

HTSI
The tie is back – but can you pull it off? 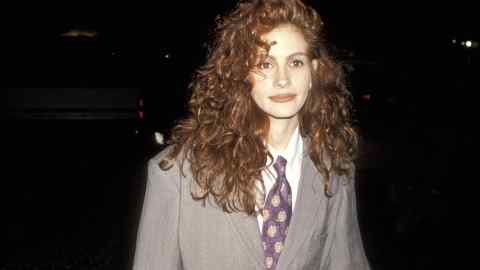 London-based designer Priya Ahluwalia founded her brand on the concept of using deadstock and vintage fabrics. She was among this year’s LVMH prize winners, many of whom also chose to rework old clothing in their designs. The 28-year-old designer works directly with mills and wholesalers to source deadstock materials, and also “travels around the UK looking for gems”, such as men’s old shirts. She first encountered the concept of upcycling when she was a child. “My mum would give me old clothes to play with; I guess this is when I first started to experiment with textiles,” she says. “Then I began repurposing materials because of my desire to create less waste within my design process. I’ve seen first-hand the scale of the garments we throw away and I wanted to try to work in a way that would use what we already have.”

Paris-based design house 1/OFF, which reworks vintage clothes, immediately caught the attention of fashion media when it launched last year. The brand’s signature pieces include Burberry trench coats with the distinctive Nova plaid re-stitched to the outside, and luxe Chanel tweeds combined with Levi’s denim jackets. “We design by playing with the masculine and feminine – like a men’s blazer with a tailored waist – and by mixing the historic and the contemporary, like a vintage checkered blazer with bright artworks,” says 1/OFF co-founder Renée van Wijngaarden.

Colville is another brand using vintage clothes to create contemporary designs. Founded in 2018 by ex-Marni designers Kristin Forss, Molly Molloy and Lucinda Chambers – the former fashion director of British Vogue – Colville redesigns vintage fabric and clothing into colourful, textural pieces with lots of layering. “1980s shell suits become exaggerated sleeve shrugs, sails become coats,” explains Molloy. “It’s reimagining things, giving them another life.” They see upcycling as something that could have broad appeal – not just to the already vintage-converted. “I think particularly now – and hopefully forever – people are turning to things that will last,” says Chambers. “Throwaway culture is less appealing. Being imaginative about clothing as opposed to ‘fashion’ seems like a really good alternative.”

In addition to upcycling, some of the biggest design houses are experimenting with deadstock fabrics and factory offcuts, among them Louis Vuitton, JW Anderson and Alexander McQueen. Italian house Max Mara has been collecting discarded camel-hair fabric from its coats, and using it as the “puff” in a new range of understated trench-style puffer jackets. And this summer, sustainable-fashion veteran Stella McCartney launched one-off pieces crafted from leftover fabrics from her summer 2020 collection. The range is sharp – a tailored jumpsuit, a slimline suit coat, a floral twin set – with craft-style details such as patch pockets on a denim shirt and buckles on a dress shirt that hint at the collection’s upcycled origins.

Indeed, rather than toning down the recycled, patchwork-style aesthetic, many brands have chosen to emphasise the details that reveal the story behind the pieces. The fact that your new dress lived a previous life as a 1980s ski suit speaks of eco-conscience, creativity and style – desirable traits not only for brands but for consumers too.

Perhaps the best example of how “dress-up box chic” has become cool is a pair of white jeans that Pelipas once wore, which also became a street-style hit. “I bought them second-hand for $10 in Ukraine,” she recalls. “They were six sizes too big, but I cinched them with a belt, redesigning them into cool paperbag-waist pants. They became my favourite uniform on set, and I did almost all of my shoots wearing them. Then there was a moment in Paris when I didn’t have enough time after shooting to change before a show, so I went as I was. The image of me in the white jeans and a tank top went viral. I was pretty surprised.”