‘Global Britain’ seeks to show its military worth in Ukraine

Laura Hughes in London and Henry Foy in Brussels

From dispatching weapons to Ukraine to its warning of a possible Kremlin-backed coup in Kyiv, the UK is seeking to put itself at the forefront of western efforts to forestall what Prime Minister Boris Johnson has called the risk of a “lightning war” in eastern Europe.

That Moscow has deployed more than 100,000 troops to Ukraine’s border is also being taken by UK officials as an opportunity for Britain to project its global standing post-Brexit, prove the continuing weight of its security services and demonstrate its military kinship with Washington and the US-led military alliance, Nato.

“The UK is being vocal and assertive because traditional security is one of the few spheres in which the UK is still fairly strong and is not affected by Brexit,” said Michael Clarke, a former director of the Royal United Services Institute, a think-tank.

“It is one of the few areas where our European partners still have to take us seriously. The UK has the imperative here, and the opportunity, to show what ‘Global Britain’ might mean in an important security context.”

Over the past week, Ben Wallace, the defence secretary, has lambasted what he called Putin’s “ethnonationalist” provocations and announced that the UK would send anti-tank missiles to Ukraine. The US and Baltic states have also sent weapons.

Liz Truss, foreign secretary, then took the unusual step on Saturday of declassifying intelligence from MI6, the UK’s Secret Intelligence Service, which claimed Russia was plotting to install a pro-Moscow leader in Kyiv.

Then, on Monday, Johnson, in response to rising fears of a potential Russian attack on Ukraine, warned Moscow that any such invasion would be a “disastrous step”.

Russia, which has accused the UK of fuelling tensions in the region, denies it plans any attack. French officials on Monday also described the UK position as “very alarmist . . . We have to be careful.” The UK — like the US but so far unlike EU countries — has partially withdrawn staff from its embassy in Kyiv.

Britain “was off the diplomatic pace . . . with the PM mired in various scandals”, said Lord Peter Ricketts, the UK’s former national security adviser. But “there has been a distinct pick-up in tempo”.

For all their post-Brexit differences, the EU has made maintaining strong defence and security ties with the UK a key objective. Truss is also understood to want to avoid what happened when Russia annexed Crimea in 2014 and the UK was seen as being absent on the international stage.

“[I] doubt if Vladimir is quaking in his boots,” said one British diplomat. “But if the noise being generated by us and allies delivers de-escalation, the UK will suddenly look like a player again.”

The UK has so far sent to Ukraine a team of about 30 specialist troops from the special operations Ranger Regiment as well as 2,000 short-range anti-tank missiles, and Wallace has said he is open to sending more.

“Britain opens military aid bridge to Ukraine,” blared an approving headline on the website of one of Ukraine’s most important military consultancies, Defense Express. “In two days, Britain has provided more anti-tank weapons than all Nato countries since 2014,” it added.

Brussels officials say the diplomatic aspects of British participation became clear at the G7 meeting in Liverpool, England last month where the UK, France, Germany and the EU’s chief diplomat Josep Borrell agreed on a strong commitment of co-operation to deter Russia.

Militarily, the UK is also viewed by the EU’s eastern states as the continent’s most important partner in Nato, the region’s prime security guarantor. 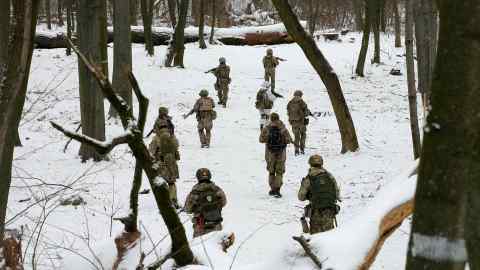 At the time, the UK ministry of defence said the personnel would “support Polish troops with planning and specific engineering tasks”. Poland’s defence minister called the deployment an “expression of our allied solidarity”.

A similar dynamic may play out in Ukraine. If Russia does invade its neighbour, few believe there will be active military support from any Nato member, be that the US or the UK.

Instead, London would be expected to provide further technical military support and intelligence. “We have no plans to send UK combat troops to Ukraine,” Downing Street insisted on Monday.

Britain is also seen by senior EU officials as an indispensable partner in any sanctions package — as last year, when London and Brussels co-ordinated a package of Belarus sanctions.

Lastly, there is British diplomacy, where Clarke argues the crisis plays to the UK’s “old cold-war” strengths. Russian defence minister Sergei Shoigu has agreed to meet his UK counterpart Wallace in Moscow. Truss is also expected to visit Moscow and Kyiv in the coming weeks for diplomatic talks.

Perhaps the most important element of those talks will be if Britain can contribute meaningfully to a detente, Clarke suggested, such as by “helping give Moscow a ladder to climb down, even if there is some military action” as well.