Accept & continue
Manage cookies
At Home with the FT LGBT+

The army captain discusses her transition, her boyfriend and the importance of mess-room banter

Sign up to myFT Daily Digest to be the first to know about LGBT+ news.

Her rooms — two in total, plus a toilet — are not spectacular. Blue carpet, cream walls, institutional modern furniture; she has a fridge, TV and photos of friends. A white sewing machine rests on the side. Not so spectacular — except the shoes. There must be 50 pairs. Most have high heels, many are new and none were on display before 2013. Hannah Winterbourne, 29, is an officer serving with the Royal Electrical and Mechanical Engineers; at present, she is attached to the King’s Royal Hussars. In 2013, she came out as a transgender woman. And today, she is the highest ranking transgender soldier in the British army.

Until 2000, LGBT people were banned from serving openly in Her Majesty’s Armed Forces. They are not welcome in most militaries in Asia, Africa and Central America. The US repealed its “Don’t ask, don’t tell” policy as late as 2011. To this untutored civilian, the army — any army — is a hotbed of machismo. Why would a transgender woman choose to sign up?

And so she has. Meanwhile, she has switched her gender identity from male to female. “They give you these magic hormones,” she says. Over years the body changes. “It’s quite exciting” — and quite “difficult” and “scary”, too. She takes her hormones through patches: “I stick them on twice a week and crack on.”

Is the army a good place to transition?

“I can’t think of anywhere better.” In the military, she is valued for her competence as an officer, she says. In the heat of battle, her comrades care more for her skills with a tank than intricate issues of gender.

That does not mean coming out was easy. At Sandhurst, training to be an officer, “I was an openly gay man,” she says. “I found that identifying as a gay man was a way to express myself to a certain degree. It was never particularly satisfactory and I never found much solace in the gay male community.”

As a rule, Winterbourne does not reveal her previous name. “That name has no relevance any more. I am the person I have always been. A name is a label and that was a label I did not particularly identify with,” she says. Had she been born a girl, her parents would have called her Rose. “Hannah Rose is my name. I identify with it and I always have done.”

Her favourite thing is the sword her parents gave her after Sandhurst. Her previous names are engraved on one side of the blade and, since her transition, her parents have offered to engrave her new ones on the other side — “as a symbol of their support”. “As my dad says it, ‘Two sides to the same coin’, which is quite nice.”

In 2012, Winterbourne was sent to Camp Bastion, south-west Afghanistan, for two months. “I was there to support the equipment, but we were under the same threats as everyone else.”

For the youthful engineer, the tour presented “demands” beyond the usual pressures of deployment. Her living space was the size of her small sitting room at Aliwal, she says. (This afternoon, the autumn sun trickles through her window. Outside — English trees and Salisbury Plain. It is awfully quiet. The barracks resembles a university campus with tight security, clipped lawns and nondescript brick architecture. Communal spaces — red carpets, red curtains — emanate comfortable stuffiness. Winterbourne’s rooms could be student digs.) In Afghanistan, she shared the space with seven men.

“Previously, I’d always had my own space, where I could shut the doors and express myself,” she says. On tour, she hid her identity “24/7”. Lying in bed at night — cooped up without privacy — her situation felt unsustainable.

Winterbourne says she would have transitioned “no matter what” but Afghanistan added urgency. What did she hope from her transition?

“I hoped that my family would still want to be my family, and my mum and dad would accept me as their daughter. I hoped my friends would still want to go out drinking and go to rugby matches with me.” She hoped her job would be OK, as well, and she would find a partner who accepted her as female. “I wanted what everyone wants in life — and I wanted that in my female identity not in my male identity.”

Winterbourne came out in stages “to friends first, then to family, then to the military and then to the wider public”. “There is nothing worse than being partially out with some people and not with others, and then going somewhere and thinking, ‘Oh god, what if someone else is there?’” Once out, she says, such panic disappears.

How was it telling her family? “I think my parents felt guilty they hadn’t spotted it sooner — or guilt that I hadn’t felt comfortable telling them sooner. There was a feeling of ‘We don’t know you any more, because if all this is true and we didn’t know about it, how can we possibly know you?’.” It took time to sink in, but her parents were never less than loving.

A picture hangs in the bedroom with words arranged like the letters of an eye test — “The way I see it if u want the rainbow u gotta put up with the rain,” it reads. “It’s Dolly Parton,” she says. “I just love it. I just think it sums up a lot of my life.”

In the sitting room, various awards share the windowsill with soft toys — an owl in academic dress and red bow tie, plus a few mermaids. “The owl was knitted by my mum,” she says. It was a gift after Cardiff University made Winterbourne an honorary fellow in July.

The mermaids represent her work for Mermaids, a charity that helps young people who feel “at odds with their birth gender” (according to its website). Winterbourne is the patron.

“I have very early memories of wanting to express myself female,” she says. As a child, she could only do so in total secrecy. At Mermaids, she sees “these kids blossom in their true selves”. “They don’t have to do what I did — spend 10 or 15 years questioning my identity. Self-loathing.” Her message is that she is happy. “It’s really important that younger transgender people don’t always hear doom and gloom stories about transgender people being beaten up or murdered across the world.”

The charity has its critics, notably in the rightwing media. It is accused of “meddling” with children as young as four or five — too young, apparently, to grasp the meaning of gender. “People sometimes get Mermaids and transgender children a bit off,” says Winterbourne. “They think we’re forcing choices on these children. We are not. We’re just giving them a safe space to be themselves and they flourish in that. We’re not asking them to be anything. We’re just saying, ‘Who do you want to be?’ And believe it or not, kids know who they are. There are no choices being made.”

Winterbourne describes herself as “outgoing” and “cheeky” — “I like a party as much as the next girl”. Her glamorous Instagram account bears this out. Is her appearance important? “I think most transgender people go through a period — early on in transition — of being very conscious of how they look, because they’re so eager for society to accept them as the woman or man or the non-binary person they know themselves to be.” Initially, she was like that. “I was desperate to look as female as possible because I wanted people to accept me as the woman I was.”

Easier, but not necessarily easy. “I am transgender, I will never stop being transgender,” she says. “Would I like to have been born female in the first instance? Of course. I have restrictions placed on me. I can’t bear my own child, for example.” Added to that, society “sees us as less than women”, which means finding a partner can be hard.

Winterbourne is going out with film-maker Jake Graf. He is a transgender man. “It’s worked,” she says. The couple has “a common thread of understanding”, yet there’s “no reason” why a relationship with a cisgender man might not work as well.

LGBT+
Winning wars is easier with well-led and diverse teams 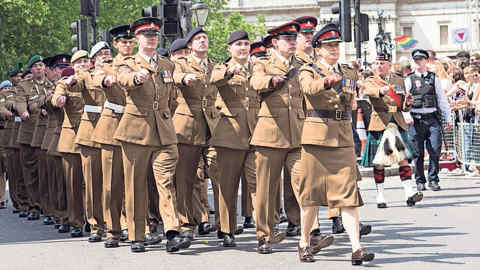 A portrait of a woman hangs above the sewing machine. “It was a present from Jake, from our time in New York a few months ago. We both have a thing for street art.”

In the bedroom, a collage commemorates a holiday in Mallorca. “This year I went on holiday with my mum,” says Winterbourne. Her relationship with her parents is stronger than ever “because I can be fully open with them and they’ve realised they didn’t do anything wrong,” she says. “I’m still the same person on the inside, I’m just expressing myself in a different way.”

In the corner, hangs a portrait of April Ashley — “a trailblazer in the trans female community in the UK” — by Winterbourne’s friend Sophie Green, who is also a transgender woman.

The artwork and high heels seem a long way from the gnarled portraits of old heroes, medals and memorabilia from past campaigns, the vast candelabra, dark wood and leather sofas of the officers’ mess. How is the mess-room banter? “Most of the banter comes from me,” she says. “There’s a fine line between banter and bullying and harassment, and I think for the most part the army gets it right.” Besides, a degree of “black humour” is important, she says, for the sake of building team spirit.

Winterbourne is transgender representative for the British army, working with headquarters to ensure its policies are transgender inclusive. “I mentor all of our transgender soldiers and their chain of command.”

How has transitioning changed her as an officer? “In my older guise, as a white middle class man, I had a lot of privilege,” she says. Only since her transition has she felt what it’s like “to be treated differently, in some cases just for being female”. Now she is “more compassionate”, she says. “I think that’s made me a better officer and a better soldier.”

What advice would she give a younger self? “I’d say, ‘You’re not alone’. Not everyone is blessed with support from their friends and family, but there’s always somewhere to go, someone to talk to, Mermaids being a great example.” You might also join up with the British army.