The property magnate on Trump, the Kushners and his plans for Manhattan’s Midtown

May 3, 2018
Jump to comments section Print this page

You can live for decades in New York and still find yourself gawping at it like a tourist let loose on a movie set. Aby Rosen, an Auschwitz survivor’s son who arrived from Germany with a law degree in 1987, looks at the Manhattan skyline a little differently.

Striding to the window of a 21st floor apartment in his newest tower, 100 East 53rd Street, the developer angles his phone to snap a shot of the terrace he opened on the neighbouring Seagram building, the mid-century modern icon his RFR Holding group bought for $375m in 2000. In 2015, Rosen horrified the few New Yorkers who can still be scandalised by closing the building’s Four Seasons restaurant, an institution for the city’s power lunchers since 1959. Now, after warm reviews for the restaurants he put in its place — The Grill, The Pool and the Lobster Club — he appears to have silenced critics who called him, in the New York Times’ words, the Barbarian of Park Avenue.

“Everybody has come up to me and said ‘I didn’t understand it [but] it needed change and you had the balls to do it’,” he says with satisfaction. “It came out glorious. It’s making lots of money.”

From another window, Rosen, 57, points out the redevelopment work going on at the foot of the slope-roofed Citibank tower (“they’re putting a lot of money into that”). He dismisses a forgettable black rectangle beyond it with the words: “This is a tear-down in 20 years.”

A block away sits the art-filled atrium of Lever House, where Rosen is still haggling with lenders to avoid losing control of the ​Park Avenue landmark after defaulting on a $110m loan in 2015. Many of the neighbouring skyscrapers are owned by business partners, including 666 Fifth Avenue, the ill-fated ​office building Jared Kushner’s family company bought a decade before his father-in-law became US president.

Now Rosen is on a mission to fill a 63-storey residential tower that has cost more than $550m to build, and to sell an idea bigger than the 6,760 sq ft penthouse he has listed for $65m. The blocks south of Central Park that constitute midtown, he contends, are turning from a forest of corporate headquarters into Manhattan’s next big residential hotspot.

“Midtown is where the action is. It’s got a kind of Blade Runner underground feeling,” he says, referring to the 1982 science fiction film. “You feel the energy here.” 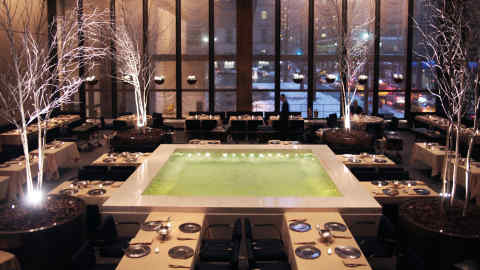 Rosen, a larger-than-life favourite of New York’s tabloids, is a fitting salesman for a pitch that combines art, food, design and celebrity. To convince his fellow multimillionaires to fill another 94 luxury apartments in a city not short of high-end condos, he commissioned Norman Foster to design the elegant, ridged-glass structure. (“I don’t want to go down as the guy who built the eyesores,” he says.)

Rosen befriended the Michelin-garlanded Joël Robuchon, who will open a street-level restaurant by March next year, and he is offering something akin to a three-star dumb waiter service for residents.

“If you live in this building you can go downstairs and say, ‘I’m having dinner for 10. Bring it up for us’,” Rosen explains. Robuchon or his staff will appear via the service lift and set out a feast on the brushed-steel kitchen countertops.

Rosen, who lives on the Upper East Side and has a home on Long Island whose front-lawn statue of a naked, pregnant Virgin Mary has caused a feud with neighbours, has also filled the empty apartments of his new building with works from his art collection. These range from a Damien Hirst spin painting to a Warhol sprinkled with diamond dust.

His use of art to help sell his buildings led him to fall foul of New York’s attorney-general, who argued that Rosen had failed to pay enough tax on $80m worth of art purchases by blurring the lines between buying for resale and buying for his own enjoyment and benefit. He settled the case in 2016 for $7m without admitting guilt and says now that he did so because he was not going into battle over unclear tax laws.

“I settled it because I didn’t do anything wrong [but] I wasn’t the guy who was going to take this on.”

In property . . . if you make money you’re more than a hero. It doesn’t work like this in politics

As if for the attorney-general’s benefit, he waves at the paintings and sculptures and adds: “Everything that you see here, if you pay my price, it’s yours.”

He owns more than enough art already, he says, but it has been a good investment for him and, “I still buy art because I believe it’s part of cultural experience; it’s a snapshot of what goes on in this world”.

Rosen paces around the property, rarely pausing except to snap another picture of an orchid, some artfully stacked books or the Bryan Hunt bronze in the lobby. Such interior design details occasionally make it to his Instagram feed, between the holiday shots from the Seychelles and the French skiing resort of Méribel.

As he walks me from the yoga room to the two gyms to the long lap-pool to the room where a ping-pong table has yet to be installed, Rosen says he gave the same tour to Cindy Crawford and George and Amal Clooney before the model and the actor-lawyer couple agreed to buy apartments in the building. The first tenants should move in this summer.

Some of those early sales were done below the prices he hoped for, he admits. (“We had to adjust to reality.”) RFR and its partner, China Vanke, started work on

100 East 53rd Street at a time when luxury apartment sales were booming, but they soon ran into a flood of supply from competing properties. Now, he says “the market is up and flying” as buyers tire of downtown neighbourhoods such as Soho and Tribeca.

RFR, which Rosen founded with Michael Fuchs in 1991, has a global portfolio which it values at about $14bn, of which $10.1bn sits in the US; 100 East 53rd Street is its biggest gamble to date.

People don’t want to stick money in the bank, wait for a few per cent return and pick it up 60 years later when they retire

The Corcoran Group’s latest appraisal of New York property trends shows midtown was the only part of Manhattan to see a drop in inventory last year, and both sales and prices per square foot have been rising. But pricing for new developments in midtown was “decidedly mixed”, Corcoran noted, with a decline in sales at the most expensive properties, such as 432 Park and One57.

With apartments costing upwards from $2.3m for a 1,000 sq ft studio, who is buying? People who visit New York regularly from Los Angeles, people from New Jersey who want to spend weekends going around the city’s parks and galleries, fans of Foster and Robuchon and people who moved downtown but have grown disappointed and seen more value in midtown, he replies.

Given rising trade tension with China, Donald Trump tweeting hostilities at Russia and the Crown Prince of Saudi Arabia cracking down on free-spending relatives, what about foreign buyers? Rosen seems untroubled. “Is it helping? Absolutely not, but it’s still the best country in the world to invest in and New York’s still the best city in the world to put your foot down, whether it’s a day, a month or a year.”

Most of his international buyers are not much affected by the “posturing and BS” they see on television, he says, which prompts me to ask him about Trump. Rosen, who has given money to Democrats, erected a giant billboard in 2016 at one of his New York properties that read “Vote your conscience!”, quoting Trump’s one-time rival for the Republican nomination, Ted Cruz.

Rosen knows Trump and has stayed partners with the Kushner Companies on the Watchtower, a building in Brooklyn Heights, since Jared joined the White House as the president’s senior adviser.

Kushner, his father Charlie and brother Joshua “are nice people. I’ve not one bad thing to say about them on a personal level,” he says. But is there something about property developers that equips them for high office?

“In my case, definitely no. In their case, 100 per cent no,” he fires back. “I think they’re all unqualified to run big countries like ours.” 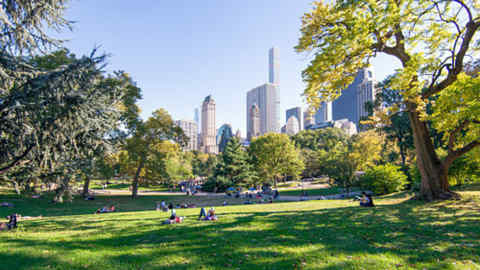 In property, “you get a construction done, you get a good architect and 24 months later, if you sell condos, you’re a hero. If you make money you’re more than a hero. It doesn’t work like this in politics,” he says, pointing to how long political change can take.

Rosen is equally unconvinced by the argument that Trump’s success with the electorate was in part a revolt against the economic inequality that $65m penthouses have come to symbolise. Nor does he worry that fear of an angry 99 per cent is about to deter the world’s wealthiest from being seen buying $65m apartments. From America to China, “old money’s not disappearing and new money’s being created,” he says.

“People don’t want to stick money in the bank and wait for a few per cent return and pick it up 60 years later when they retire. People want to blow it out.”