The strange death of the salutation

Last week a friend asked me a question I should have been able to answer straight away.

Because it was close to the end of the UK tax year on April 5, he had to write a grovelling letter to Her Majesty’s Revenue & Customs.

He had no way of knowing which tax official would see the letter, but he was sure the document should be faultlessly polite, which is why he asked: “Should I start it with ‘To Whom It May Concern’? Or does no one write that any more?”

At first I thought of telling him: goest ahead with thy ye olde salutation. Using it might suggest he was of a certain age, and hopelessly past it, modern life-wise — but for tax office purposes this could be a good thing.

Then I realised that, not only was it a long time since I had last seen the “To Whom” phrase, I was getting a lot more work mail that began with no salutation at all.

Instead of starting with “Dear”, “Hello”, “Hi” or the more troubling “Hey”, people were firing off emails that launched straight into the matter at hand without any form of greeting. 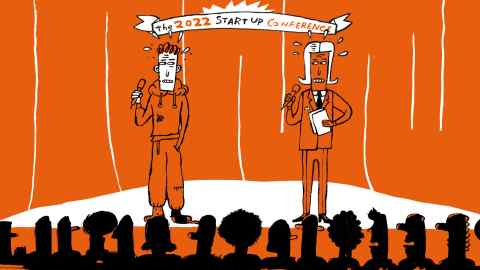 This is perfectly acceptable behaviour for work colleagues in close contact. But when it comes from someone who has not been in touch for a while, or a stranger, it can feel jarring, confusing and sometimes plain rude — even though I am sure this is not what a lot of writers intend.

Consider the email I got the other day from a man I do not know that began like this. “Back in the day the Navy would have the Uniform of the Day.”

Baffled, I searched for clues about what this might mean. The subject heading said “business attire” and googling showed the uniform of the day was, as one might expect, designated garb for military people.

Eventually it dawned that the sender was a reader responding to a column I had just written about the unexpected ways the pandemic was upending the established order for acceptable work wear.

It was, in fact, a rather good email that told me things I did not know, including the news that Hollywood actors smear their feet in cannabis cream to combat the pain of high heels.

But its greeting-free beginning nearly stopped me from reading it at all, and it was by no means the first of its kind.

When I asked work colleagues what they made of this brusque, non-salutation communication, one looked at me kindly and said it might be a “generational” thing, meaning something young people do that older people dislike.

Working It podcast15 min listen
Why does my boss write such rude emails?

This is entirely possible, but does not gel with my experience. The man who sent the cannabis cream email was a retiree, and other correspondents of his ilk have been middle-aged or older.

If the opening salutation is fading, it is probably no surprise after two harried pandemic years, followed by headlines of world war three. But my experience of it suggests it is almost always best to start an email with some form of greeting.

As for the eternal question of what that greeting should look like when writing to a total stranger, it is not that complicated.

To Whom It May Concern and its close cousin, Dear Sir or Madam, are not the worst way to start a letter to, say, someone in a tax office. But it is best to avoid either if possible, especially if writing anything like a job application cover letter.

Both reek of awkward formality at best and laziness at worst. If you do not know the precise name of the recipient, try to find out the name of the department or division they work in. That way, you can at least write something like “Dear Marketing Department” or “Dear Hiring Team”.

If you know who you are writing to, but are not sure how to address them, a simple “Dear” before their name is usually fine. If unsure which is the first name and which the second, write both. Use a title, such as professor or doctor, if appropriate. Above all, write something. That way you stand a much better chance of also being read.

Addressing a peer of the realm is no joking matter / From Giles Dixon, London TW9, UK

What about a Persian salutation for FT letters? / From Jo Jacobius, London N6, UK

Salutation is one thing, but don’t forget the valediction / From Paul Drexler, Seattle, WA, US

When informal greetings are a bridge too far / From Professor Bhupendra CK Patel, University of Utah, Salt Lake City, UT, US