Oyuna Tserendorj on the wide-open magic of Mongolia

For me, Mongolia is open nature and the eternal blue sky. The sense of space is mindblowing. Mongolians live close to the earth still, and that gives them so much energy.

My father grew up in eastern Mongolia and he was a nomad – that is what he remained at heart, even though he later ended up being secretary of state. My father’s family are still nomads in the east; my cousin has 300 horses. When he came to visit us in our apartment, he said, “It feels strange to me to be within four corners.” He lives in a ger [yurt] – a round structure with no corners. There are very few things in nature that have defined corners. It offers a very different perspective.

I left my home in the capital, Ulaanbaatar, to study fashion engineering in Budapest. But I would go back to Mongolia every summer to see my family. One year my sister, who runs horse trekking tours, asked if I would come and help translate at Lake Khövsgöl, in the north of Mongolia. I had to collect a guest who was arriving early at the airport. There I stood, holding up a board scrawled with the name of the man who would later become my husband. We ended up in London where we started our label Oyuna, for responsibly produced cashmere.

The camp we stayed at on that first trip, Toilogt, is one we still return to. Now it has a second edition, Double Lake, right on the pristine lake with pine forest all around. There’s a mix of teepees, wooden cabins and traditional gers to stay in. They are involved in the Mongolia Sunrise To Sunset ultramarathon which has been going since 1999. I’ve walked it twice and the money goes towards preservation projects for the national park. There’s also Arburd Sands camp, a tiny place with only 20 gers, one of which has a library inside. All of these places are set up for tourists, but they are the closest you can get to how Mongolian nomads live.

Galloping in the steppes with the nomads makes you feel alive

Cashmere production is the backbone of the nomads’ livelihoods. The human aspect is very important to me. We must first address people, because only inspired, happy people will take care of the land. There are ways to produce cashmere sustainably, focusing on quality rather than quantity. When goats graze, they take the vegetation out by the root; nomads know this and traditionally it has been managed by rotating pastures, but goat numbers are increasing due to economic pressure. So a return to traditional herding is one of the crucial ingredients for cashmere sustainability.

I go home to Ulaanbaatar – we call it UB – to visit the factory and see family. I’ll make time to spin the prayer wheels at Gandan monastery; Mongolia is the only country outside of Tibet and Bhutan with Tibetan Buddhism as the dominant religion. I also always share a meal with friends at Veranda restaurant, a timeworn but much-loved institution known for its great steaks. My advice to visitors is always the same: spend a couple of days in UB when you arrive to decompress and prepare for your trip, then head out into those wide open spaces as soon as you can. Make the most of some hot showers and Wi-Fi at the Shangri-La hotel – then escape our capital’s terrible traffic jams for “the land with no fences”.

The camps worth going to all involve a long drive from UB, between four to 15 hours away. But then, the journey really is the point of the trip here. Most camps will provide everything for you along the way, including a guide and food – you can try traditional foods like horse’s milk and buuz dumplings. Double Lake is the one I love to return to because of my history there, but for a total escape there is the Genghis Khan Retreat. It has sophisticated cuisine and live piano music but the greatest luxury is probably the complete lack of electricity! Then, for the most authentic experience of Mongolia’s Gobi Desert, I’d recommend Three Camel Lodge, near Dalanzadgad, which ticks all the sustainability boxes, is staffed entirely by locals and has arranged expeditions for organisations such as the World Wildlife Fund.

How To Spend It In...
Cheers to Chicago, with photographer Paul Octavious 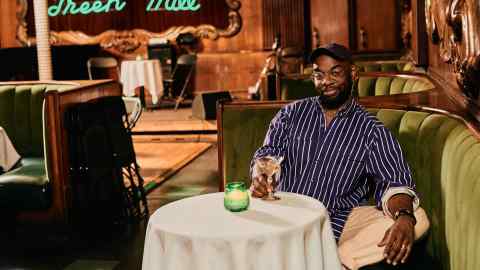 The best time to visit is probably July, when temperatures are a reliable 25 to 28 degrees, though those blue skies mean it’s always cold at night. July is also when the centuries-old Naadam Festival takes place, when Mongolian wrestling, horse racing and archery are celebrated.

I’ve travelled all over, but still the best experience I’ve ever had has been back home in Mongolia’s wide steppes, galloping on a horse with the nomads, whistling. It makes you feel alive.