The ‘Jungle’ camp may be demolished, but for the women and children crossing the continent the future is a blank

Adam Thomson in Calais and Dunkirk

Last November, Mamit stuffed four changes of clothes into a black leather handbag, grabbed her Bible and left her native Eritrea under cover of night, fearing persecution for her religious beliefs. Ten months later, in mid-September of this year, the 42-year-old mother of two sits on a roadside by the Jungle migrant camp in Calais, northern France. It is just a few weeks before the French authorities will begin to demolish the camp and resettle its inhabitants.

She is still clutching her Bible, which is now dog-eared and missing its cover. She is also much thinner: Mamit lost nearly a quarter of her body weight after long periods of hunger, dysentery and other illnesses during her journey from Africa. “I was a fat woman when I left home,” she says, her hands tracing a balloon shape around her now-slender figure. “My family would never recognise me now.”

More than a million men, women and children — economic migrants and refugees from war-torn countries — entered Europe by land and sea in 2015 alone. They continue to move into and across the EU, undeterred by the lack of access to medicine or doctors on the journey. Even when they reach Europe, the great majority continue to face health risks, particularly in places such as the heavily populated Jungle camp, which the French government began dismantling in October after years of inaction.

“The refugee challenge is first and foremost a humanitarian catastrophe,” argues François Gemenne, a migration studies researcher at France’s Sciences Po university and the University of Liège in Belgium. “They arrive in Europe having suffered psychological and physical damage only to realise that, in Europe, conditions are often worse.”

Women such as Mamit, and especially those travelling with children, are often the most exposed to the physical and mental ravages of a journey that can take months, sometimes years. Reliable figures for migrant movements are difficult to pin down. But an asylum “pre-registration campaign” to collect data, launched in June by the Greek Asylum Service, showed that 44 per cent of the more than 20,000 people enrolled were female. Of those women, almost one in five was travelling with children, and about one in six was pregnant or had recently given birth, implying far greater health risks for women than for men.

Yabsira, a 28-year-old mother of a five-year-old girl, says she had no idea of the horrors her journey would entail before she fled Sudan along with her then four-year-old daughter. An Eritrean by birth, Yabsira had been living in Sudan with her mother, husband and daughter, and working as a maid, having escaped violence at home years before. After her husband was arrested and subsequently disappeared, Yabsira decided Sudan was no longer safe.

“We left in a big lorry,” she recalls of the 10-day leg to Libya, the first part of a three-month struggle to get to Calais. “There was almost no food or water, so the little they gave us I gave to my daughter.”

In the lorry, Yabsira slept with her daughter curled up in her lap for lack of space. They suffered diarrhoea and vomiting repeatedly on the journey, and had no access to any form of healthcare. Two of their fellow passengers died — one fell out of the lorry, the other from dysentery.

In the Calais camp, where she had been for five months, Yabsira and her daughter were living a precarious existence. They tried to get to their final destination of the UK many times, but she says it proved almost impossible to jump on to a lorry with a child in tow. In the meantime, they sheltered in a cramped caravan in the Eritrean section of the approximately 9,000-strong camp. About 1,000 of the camp’s inhabitants were estimated to be unaccompanied minors, the most vulnerable of whom were being allowed entry to the UK at the time of the camp’s destruction.

Yabsira says a doctor in the camp gave her a spray to treat a rash that broke out on her arms and legs. She has also received a bottle of syrup for treating the colds, sore throats and temperatures that her daughter has suffered since arriving at the camp. It is the first medical attention the two have received since setting out from Sudan.

Until recently, what healthcare there was at the camp was thanks not to the French state but to Médecins Sans Frontières (MSF), the humanitarian aid organisation, and to other non-governmental organisations, such as Médecins du Monde. Many experts argue that the lack of official attention given to refugees’ health provision across Europe is indicative of EU authorities’ unwillingness to acknowledge a problem that shows no signs of disappearing. “They have preferred to turn their backs in the hope that the problem will just go away,” says Gemenne. “It’s just a crisis management mindset.”

At the EU level, some kind of response is finally taking place, argues Jean-Pierre Schembri, a spokesman for the European Asylum Support Office (Easo), an EU agency set up to facilitate and co-ordinate practical co-operation between member states on aspects of asylum, including how to provide healthcare. “Easo is deploying vulnerability experts in the Greek hotspots in order to identify and refer applicants with special needs, including applicants with health issues,” he says.

The agency, which has no specific mandate on health issues, has nonetheless developed guidelines for member states, setting standards for reception conditions of migrants, including access to healthcare. The guidelines were only adopted by Easo’s management board this September and their publication is still pending. 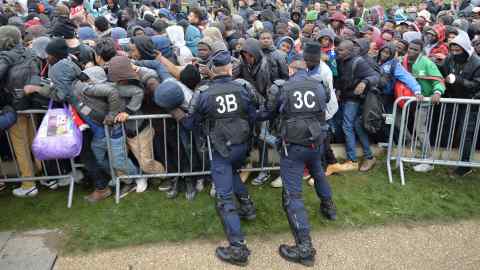 Meanwhile, Gemenne says individual countries continue to undermine EU-wide efforts to co-ordinate a more comprehensive response to migrants who arrive at their borders. “Proposals put forward by Brussels to improve conditions and harmonise asylum regimes across Europe have been systematically rejected by governments, for fear of losing sovereignty,” he says.

An MSF study conducted at the end of 2015, of more than 400 people living in the Calais camp, shows that health problems are a constant theme of many journeys, in particular for women with children, who tend to be more vulnerable to sickness because of the physical demands of the journey, as well as the fact that travelling with children can make the going slower.

The study found, for instance, that almost two-thirds of respondents suffered at least one health problem during their journey, with acute respiratory infections by far the most common illness. It concluded that accessing healthcare is the hardest in Libya, where people wanting to enter Europe are held for weeks at a time as they wait for passage across the Mediterranean to Italy.

Mamit, who left her two children behind in Eritrea because she could not afford the fee the smugglers were demanding, says her time in Libya was the most difficult of the entire journey. “I waited for two months in a big hangar in that country,” she says. “There must have been 600 of us in there. There was no room and the only thing they gave us was pasta, day after day.”

During the wait for the boat to Italy, she fell ill with severe stomach cramps. “I asked for a doctor because the pain was so great, but I was just told there wasn’t one,” she says. “I spent two days like that; I thought at one point I wasn’t going to get better.”

For migrants who take other routes, things are little better. Sidra was four months pregnant and still suffering acute morning sickness when she set out with her husband and their two young children from her native Iraqi Kurdistan for the UK. She says that travelling with her eight-year-old son and seven-year-old daughter was a constant worry. “You have to look after them much more because they get so tired,” she explains. “You also live in fear of losing them because there are so many other people.”

The worst moment was their sea crossing from Turkey to Greece, an early stage of a commonly taken route that involves many days of trying to avoid police and border patrol units at multiple international frontiers, including Albania, Macedonia, Serbia and Hungary. “We spent days on the boat without food or water,” she says. “My children were so frightened and so was I. I thought I was going to die.”

Now her family is housed in a small wooden shelter at a migrant camp set up by MSF last year in Grande-Synthe, a suburb of Dunkirk, 40km east of Calais. It is tempting to think that they are over the worst. The last rays of sunlight are starting to fade, and Renas, Sidra’s seven-year-old daughter, is dressed in a pair of Mickey Mouse pyjamas and playing with other children, while a group of older girls sit on stools plaiting each others’ hair.

Several Kurdish families staying at the camp have come together for the evening to share donated meat and rice, which the women are busy preparing over small wood fires. Washing dries on two long clothes lines and Sidra tells her children to pick up some half-broken toys they have left in the dirt.

Grande-Synthe houses about 2,500 people, most of them Kurds — and mostly families with small children. There are some rudimentary health facilities at the camp, thanks to a modest medical centre established by MSF at the start of the year which is now run by Utopia 56, a volunteer-based organisation, and local health authorities.

Since February, MSF has carried out at least two vaccination campaigns for 2,000 adults at Calais and 500 at Grande-Synthe. They also vaccinated about 250 children aged under six — 200 in Grande-Synthe and 50 in Calais — against tuberculosis, polio, tetanus, and gave them the triple MMR vaccine. But in spite of that, families staying at Grande-Synthe still say that they suffer continual health problems, ranging from persistent respiratory illnesses and stomach infections to rashes and sores.

Maternal health
Breastfeeding in Poland: not in public, please 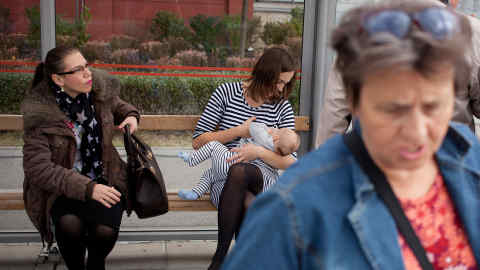 Sidra and her family have been in the camp for 45 days. They have tried to smuggle themselves into the UK three times, each time leaving everything behind except for their sleeping bags. But she says that sneaking into a lorry at night with two small children is just too difficult. Now that Sidra is six months pregnant, and wondering how she will get to her final destination, doubts are starting to creep in about where her next child will be born. “I still hope that it will be England,” she says. “But I’m no longer as sure as before.”

In Calais, as the makeshift structures of the Jungle camp are taken down, the future for Mamit, Yabsira and her daughter, is a blank.