Fund management, one of the jewels in the crown of the City of London since the financial crisis, had hoped to escape the worst of Brexit disruption. But mounting evidence suggests that the UK capital’s primacy as an investment management hub may be fading as a result of Brexit.

Global asset managers have already bolstered their teams in continental Europe and transferred billions of pounds of assets to fund centres such as Luxembourg and Ireland. But the latest sign that the UK’s break from the EU is slowly sapping power from London is the recent relocation of several fund industry chief executives to continental Europe.

Though the changes were made for different reasons and none of the asset managers cited Brexit as a contributing factor, they are an indication that UK’s departure from the EU is denting London’s appeal as the nerve centre for asset managers’ international operations.

Amin Rajan, chief executive of Create Research, a consultancy, says that given the stature of the companies involved, the recent executive moves are far from a mere coincidence.

“There is acute uncertainty in the asset management industry about Brexit and the fate of ‘passporting’ arrangements,” says Mr Rajan. “It hangs like the sword of Damocles over every strategic decision.”

There is a tradition of global asset managers locating their CEOs in London in light of the city’s status as a top financial centre. US and Asian investment houses have historically established their European headquarters in the UK capital, seeing it as a gateway to Europe.

Some big European asset managers with parent companies headquartered on the continent also placed senior leaders in London. Santander Asset Management and Candriam Investors Group, which is owned by a US company, continue to be led by London-based CEOs despite the bulk of their business being in the EU.

This structure reflects both the city’s role as a launch pad for companies’ global expansion, as well as its popularity with the bigwigs of international finance. Examples of similar structures abound in investment banking too: Andrea Orcel, until recently head of the investment banking unit of Switzerland’s UBS, carried out his role from London.

From a business perspective, the benefits of London included its large pool of talented investment professionals and international fund salespeople, as well as the large amount of powerful consultants and institutional investors located there.

“London used to be the obvious place for global asset managers to locate their headquarters, but the benefit of basing a business [in the UK capital] is now less obvious with the prospect of Brexit,” says Jean-Louis Laurens, former managing partner of Rothschild & Cie Gestion. “For groups with a parent in continental Europe, the argument for being based in London is basically gone.” 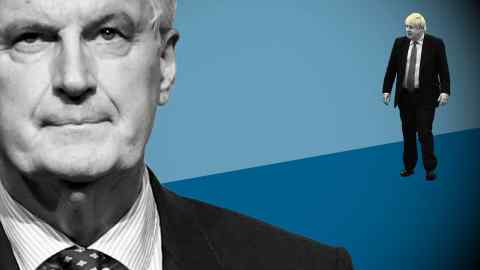 Although the continuation of delegation rights after Brexit has been protected, enabling investment groups to continue to manage funds from London, a question mark hovers over what will happen to passporting — the open relationship on which asset managers rely to sell funds across the EU. The agreement governing the UK’s withdrawal from the bloc contains scant detail on this point.

Mr Rajan says: “London may well remain a major centre for the asset management industry, but the continent will be its growth engine. London’s pre-eminent position may well erode with time, depending on what replaces passporting arrangements.”

But Brexit is not the only factor prompting asset management CEOs to retreat from London. The multiple headwinds buffeting the industry, including declining profit margins and increasing regulatory costs, are leading parent companies to ask hard questions about the future of their fund businesses.

“Some groups are pressing the pause button on their asset management expansion plans,” says Jonathan Doolan, head of Europe, Middle East and Africa at Casey Quirk, the Deloitte-owned consultancy. “They continue to make significant investments in London but they are retrenching a little bit.”

By locating the CEO of their asset management unit closer to home, the parent bank or insurer can exert greater control over the future direction of the business. “Some parent companies want to think about strategy in a much more tied-up way across the group, so it makes more sense for the [asset management] CEO to be located closer to the parent,” says Mr Doolan.

The leadership and location changes at Axa IM and DWS, for example, coincided with a shift in strategic direction for the companies. Parents Axa and Deutsche Bank have instigated cost-cutting programmes at both fund managers, as well as considering selling or merging the businesses with a competitor.

Like most CEOs of international companies, asset management chiefs rarely spend their whole week in one location, spending hours on planes as they shuttle between their company’s different locations.

This roving status is what allowed many fund bosses to remain based in London for so long. During his time at the helm of DWS, Mr Moreau lived in London, where his family was based, but spent several days a week in Frankfurt. Similarly Axa IM and AllianzGI accommodated Mr Rossi and Mr Utermann’s requests to live in London, where they had personal ties, but the two regularly travelled to Paris and Munich.

If the rise of nationalism remains unchecked, we may well see separate CEOs for the UK and the EU

As EU fund groups retreat from the UK, however, US asset managers’ commitment to the country as a base for their European leadership does not appear to be waning.

Jörg Ambrosius, recently appointed as head of Emea for State Street, the US asset manager and depositary, says: “As of now I have no reason to doubt London’s pre-eminent position. It is still the natural base for the European head of a global financial institution.”

Mr Ambrosius, who works primarily from London while continuing to live in Munich where his family is located, oversees both State Street’s UK and EU entities. He does not foresee this changing with Brexit but admits that a drastic break between the UK and EU could result in the group having to appoint separate leadership teams for the two businesses.

“[Post-Brexit] we will have to see if we need a stronger segregation between entities,” he says.

Roving executives such as Mr Ambrosius will become more common as asset managers wait for the Brexit fog to clear, notes Mr Rajan. “However, if the rise of nationalism remains unchecked, we may well see separate CEOs for the UK and the EU,” he adds. “This could make global asset managers’ operating models more bureaucratic.”