South Korea’s Park Geun-hye denies being in a cult

Park Geun-hye shot down claims she is a member of a cult and practised shamanistic rituals in South Korea’s presidential office as she sought to draw a line under a scandal that has shaken the country’s political establishment.

In a live televised address, Ms Park said she would accept an independent investigation into claims that a long-time friend and confidante had exerted influence over presidential decision-making despite holding no official position.

Choi Soon-sil — known as the president’s “shaman adviser” — is also alleged to have pressed some of the country’s biggest companies into donating millions of dollars to organisations under her control.

The statement from Ms Park came as a Gallup poll put her approval rating at 5 per cent — a record low for any leader of the east Asian nation.

“Everything is my fault and I feel great responsibility,” the country’s first female leader said. “But it is not true that I am a cult follower and practised shamanistic rituals at the presidential Blue House.”

Ms Park added that she would “fully co-operate with the prosecutors’ investigation”.

“If necessary, I am willing to be investigated by them and will accept a probe by an independent counsel.“ 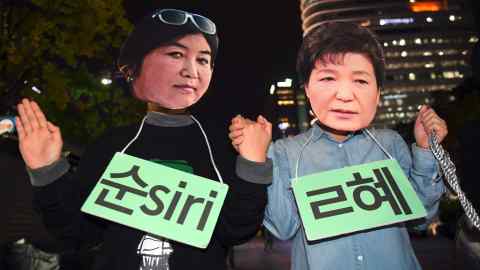 The saga has dominated headlines for nearly two weeks as South Koreans grapple with claims that Ms Choi exerted control over their president on an array of issues — from national security policies to what handbags Ms Park should use.

Outraged protesters have taken to the streets of central Seoul’s Gwanghwamun district every night this week, with further demonstrations planned. A recent poll found that 70 per cent of those surveyed wanted Ms Park to be investigated.

Many have also demanded her resignation — a prospect Ms Park seemed to reject in her address.

“The country’s security is in a perilous situation and the economy is also facing difficulties . . . Government functions should be recovered to prevent any further chaos or vacuum in national affairs,” she said.

Ms Choi has been detained since Monday, a day after she returned to Seoul from Germany to face questioning over the allegations. Arriving at the prosecutors’ office she was mobbed by media and protesters and appeared to make a confession.

“I have committed an unpardonable sin,” she said — a statement her lawyer quickly denied amounted to an admission of guilt.

Everything is my fault and I feel great responsibility. But it is not true that I am a cult follower and practised shamanistic rituals

The relationship between Ms Park and Ms Choi can be traced back to the latter’s father, Choi Tae-min, a cult leader and self-proclaimed living Buddha.

When Ms Park’s mother was assassinated in 1974, he approached the young woman, claiming he could help her communicate with her late parent.

The two soon became so close that Ms Park’s siblings at one point petitioned then-president Roh Tae-woo to “save” their sister.

When the elder Choi died in 1994, his daughter moved into Ms Park’s inner circle — a position she has since not relinquished.