Air monitors, purifiers and apps find an audience outside Beijing

When Frank Hammes first came to China, the main market for the air purifiers his company sold was from hospitals and other institutions. Today, Switzerland-based IQAir has a booming consumer business, thanks to public concern over air quality that has created a global market out of a Beijing obsession.

Individual action and public policy are helping shape the response to the transformation of China, the most prolific consumer of polluting fossil fuels, and the health crisis that incurs.

The metamorphosis of anti-pollution devices into household goods stems from the “crazy bad” air quality in Beijing over the past decade, and a US embassy monitor that turned air pollution into a matter of public concern. Once developed for anxious Chinese consumers, such gadgets have found new niches from South Korea to Europe.

The market for air purifiers has boomed since 2011, when the US embassy began tweeting Beijing air quality levels. At that time, 3m air purifiers were sold in China each year, according to Guangdong-based GF Securities. By 2016, 4.35m units a year were sold. GF Securities expects the number will rise to 9.85m a year by 2021.

“The level of pollution in China has spawned a worldwide air purifier market,” says Matloob Hasan, director of research at Azoth Analytics in India. “The awareness about the harmful effects caused to health by the rising air pollution in China has increasingly persuaded a large population across the globe to install air purifiers, in both commercial as well as residential facilities.”

The explosion of public concern over air quality has led to the development of smartphone apps, small household air monitors and even mini-purifiers for inside cars. Meanwhile, face masks, once favoured during the Asian winter for people with colds, have become a fashion statement. Bicycling commuters show they are hardcore with a version that looks like it came out of the trenches of the first world war.

Consumer products developed for a large, middle-class Chinese population have found new markets elsewhere. In South Korea, where the public worries about homegrown pollution as well as that blowing in from China, the market for air purifiers grew from $268m in 2013 to $888m in 2016, according to news agency Yonhap.

The Olympic Games in Beijing in 2008 put air quality in the Chinese capital under the spotlight. However, the sea change for IQAir came in 2012, when the Chinese government finally decided to disclose daily air pollution data to counter the steady stream of tweets from the US embassy. Spates of especially bad air known as the “smogacalypse” also alarmed the public.

“This new level of transparency created a new level of awareness,” says Mr Hammes, the chief executive of IQAir.

The anti-pollution industry is not limited to hardware. Air Matters, a mobile phone app publishing a real-time air quality index, first gained fame in 2011. It reached more than 800,000 daily active users in 2016, during a period when thick smog coverd half of the country. More than half its users live in Beijing and Shanghai.

As the pollution protection market develops in China, local companies are jumping into a niche that had been dominated by foreign companies, by offering cheaper products. Xiaomi, China’s smartphone maker which raised $4.7bn in a Hong Kong listing this year, offers several kinds of air purifier at one-tenth of the prices asked by foreign companies.

International companies such as IQAir have countered with portable air purifiers that white-collar workers can place on their office desks or to carry around during business trips.

Mr Hammes is “amazed” by the number of companies in China showing the strong interest in providing clean air at work. “Employees are becoming more demanding because they see they’ve been spending so much of their lives in the office and maybe more than with their families.”

The quality of air has also become a sales point for schools, shopping malls and even Wanda cinemas in China. High-end real estate developers offer air purification systems to raise the sale prices of their apartments.

That too is catching on elsewhere, especially in the Indian capital Delhi, where pollution levels are fast becoming a litmus test for public dissatisfaction. As in Beijing, international schools are competing on the basis of indoor air quality. So is the Oberoi Hotel, where a huge display contrasts indoor and outdoor air quality. Not to be outdone, the Paharpur Business Centre — home to companies such as Microsoft and Samsung — has branded itself a “pollution free building”. 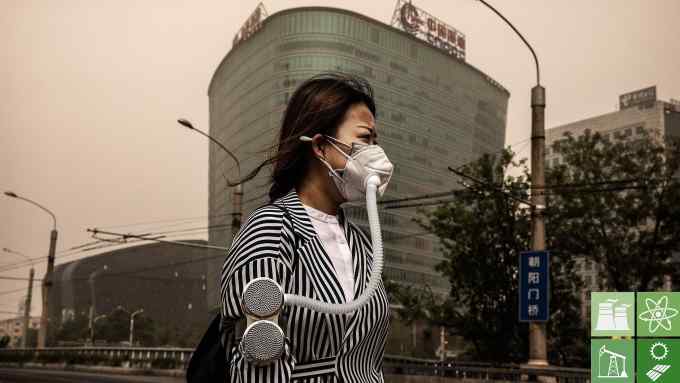