Brewers hold breath on sales impact of US marijuana votes

In November American voters took to the polls to elect their president. But voters in a handful of states were also given a say on legalising use of marijuana for recreational use. In the states of California, Maine, Massachusetts and Nevada, they approved.

In a statement after the vote, the California Cannabis Industry Association, which lobbied in favour of the change, said: “We now expect to add new jobs, add billions of dollars to California’s economy, and collapse an illicit market that has damaged our communities.”

The four states joined another 24 to have approved cannabis for medicinal or recreational use. The California vote was a landmark because, as the US’s most populous state, its addition means that 21 per cent of the US population now has voter-endorsed access to marijuana for recreational use.

Putting aside the merits or otherwise of legalisation, the pressure to decriminalise marijuana is to a great extent due to the voting power exercised by consumers over state and federal regulators in the US.

According to research by Cowen and Co, a financial services group, more than half the US population now supports the legalisation of marijuana, at least double the proportion 20 years ago. Legal sales of marijuana reached $7bn last year, according to the research.

“While this [legalisation] will ultimately come down to regulation, mounting ballot initiatives are allowing consumers to continue shifting public policy, in line with changes in public sentiment,” says Vivien Azer, an analyst at Cowen.

Some drinks companies fear that the alcohol industry could be a potential loser from the legislation.

Boston Beer Company, the largest craft brewer in the US with brands that include Samuel Adams and Angry Orchard cider, said in a regulatory filing last year: “It is possible that legal marijuana usage could adversely impact the demand for the company’s products.” Similarly Brown-Forman, the distiller of Jack Daniel’s whiskey, also lists as a risk factor in its accounts: “the potential legalisation of marijuana use on a more widespread basis within the United States or elsewhere”.

Trevor Stirling, analyst at Bernstein, takes a different view, arguing that beer and weed are more likely to be complements rather than substitutes.

Percentage of US 12th grade students who use cannabis

Widening US acceptance of marijuana has coincided with attempts to place more restrictive measures on tobacco. In November Californians also voted strongly in favour of Proposition 56, which aimed to add $2 tax to the cost of a packet of cigarettes and also impose further tax on ecigarettes.

Voters in Colorado and Missouri, however, voted against measures that would have raised their state taxes on cigarette sales. 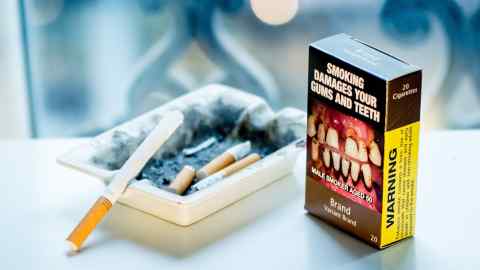 While smoking in the US, in common with much of the developed world, is on a downward trend, marijuana remains a key public health concern. The percentage of 12th grade students — normally aged 17 to 18 — who had used cannabis in the previous month doubled between 1982 and 2010 to above 20 per cent, according to research by the University of Michigan, overtaking the number of students who had smoked cigarettes.

It is, though, too soon to say whether marijuana will be legalised in the states in which it has been approved by voters, because the federal government regards marijuana as an illegal drug — it is classified by the Drug Enforcement Administration as a Schedule 1 drug, on a par with heroin and ecstasy.

Furthermore, Donald Trump’s victory as president on the same day as the marijuana vote could see an end to an uneasy truce between federal and state authorities over handling the drug.