I am out for dinner at Louie, a new restaurant in London’s Covent Garden. It’s only the first day of service (after months of delay), but I can already tell this place is going to fly.

This is what I’ve been missing. I don’t mean going out to a restaurant. I have done that plenty of times in the past few weeks. I mean going to a restaurant where the crowd is such a big part of the draw. Here I can take pleasure in what’s going on at the next table because: a) there are actually people at the next table, albeit at some distance – even pre-Covid it was the plan for placements to be quite far apart; b) the sightlines are impeccable; and c) the people here are so damn beautiful I can’t help but look.

It’s not just the crowd. Everything here is beautiful, from the retro-patterned carpets to the gold corduroy upholstery to the gleaming copper bar. There’s a palpable sense of excitement. Finally, somewhere new and exciting. Somewhere worth dressing up for. Somewhere you can go and be part of a scene.

And not just any scene. The scene, if the French-born managing partner Guillaume Glipa has anything to do with it. He – and his partners, the French based hospitality group Paris Society – want Louie to be an alternative to Chiltern Firehouse, which seems like a tall order, given how insanely popular the Marylebone hotel-restaurant continues to be. But if anyone can pull it off, Glipa can. After years at top-tier restaurants in New York and London, he was part of the team that launched Chiltern Firehouse under André Balazs in 2013. He then joined forces with Richard Caring to reopen Annabel’s in 2018. He knows how to launch a success.

Likewise, the interiors at Louie have been designed by Dion & Arles, the Paris-based firm co-helmed by Maxime Dion, who was also part of the founding Firehouse team. That restaurant’s chic homeliness also prevails at Louie, which is housed in a five-storey townhouse in the same street as The Ivy. The higher up you go, the more intimate it gets. At ground level, the bright dining room features a seafood counter and jukebox; the carpeted first-floor restaurant finds velvet banquettes crouching under lower ceilings; the cosy second floor has a bar and terrace; and the top-floor “cabana” is so informal you might want a lie down.

Under American head chef Slade Rushing, the menu brings together “classic French gastronomy, revisited New Orleans dishes and New York culinary heritage”, with a mix of brasserie staples (steak tartare, Caesar salad, New York strip) and some less familiar Louisiana influences (such as the oyster po’ boy eclairs and praline bread pudding). Some dishes are so good they risk eclipsing others. Among the starters, the Cornish crab cake was nice (crisp on the outside with naturally sweet meat), but the star was oysters Rockefeller, poached in butter and served with spinach, bacon crisps and liquorice root.

From the mains, the seafood gumbo left my friend a bit cold (the combination of an insistent, bisque-like sauce with robust cuts of seafood, sausage, crab rice, okra and cherry tomatoes delivered too many flavours). But making up for it was the New Orleans-style BBQ lobster with lemon confit, which came with hunks of garlicky toasted baguette that we dragged across the plate to mop up the creole-spiced butter sauce. Gosh, that sauce was something. As was the delicious bacon-wrapped monkfish. And the creole spiced lamb chops, which were robustly seasoned and smoky, with thyme-infused black-eyed peas. We also ordered a side of buttermilk potato purée, which we didn’t regret.

With dessert, a clear ranking emerged. The apple tarte tatin was lovely but upstaged by the Southern pecan pie, a delicate layering of nuts, cream and wafer. Top of the pile, though, was the Baba Bananas Foster, an evolution of rum baba and bananas Foster, which came with a jug of rum and a dish of cream. The spongy, boozy, pudding-y soup ticked all my boxes.

HTSI
Café cool: a tale from the Towpath 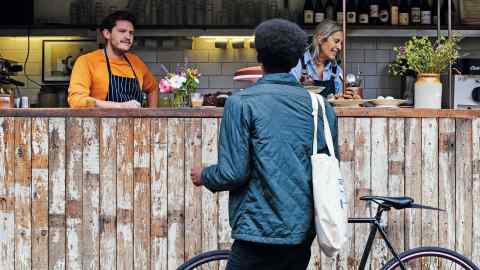 But will this be enough, particularly for somewhere that hopes to be the next Chiltern Firehouse? When we spoke pre-launch, Glipa admitted you could find great food and wine everywhere in London. He wanted Louie to offer something more, a place for “social moments”, where you could run into people on the stairs and get chatting on the terrace. The virtue of opening in a townhouse is that the narrow stairwells and warren-like configuration throw up possibilities of bumping into people and chance encounters. But how does that square with social distancing? All I can say is that if you’re into people-watching in gorgeous surroundings with lovely food, Louie is just the place.