Climate change: how the jet stream is changing your weather

At the summit of the Greenland ice cap the temperature rarely rises above zero degrees centigrade — the elevation is 3,200m and the ice below is more than a mile thick.

But last Friday, as the sun beat down, a small weather station laden with sensors captured something highly unusual: the temperature crept past zero and up to 3.6C — the highest since records began three decades ago. As temperatures rose across the massive ice sheet, which blankets an area five times the size of Germany, around 60 per cent of the surface started to melt, one of the largest ever recorded.

Scientists know of only three prior occasions in the past 800 years when there has been melting at the very top of the ice cap, which is kept chilled by the large volume of ice beneath. But this seems to be getting more frequent — it is now the second time this decade it has happened.

“The last time we saw melting at the summit, in 2012, we thought it was the extreme of the extremes, and wouldn’t happen again so quickly,” says Konrad Steffen, a professor of climate and cryosphere at ETH Zurich, who operates a network of 18 monitoring stations across the ice sheet. “But now we are facing more of these extremes.”

Prof Steffen’s data shows that between July 30 and August 2 a heatwave in Greenland produced several record highs across the ice sheet, including at East Grip, the second highest monitoring station. “If you start melting at the top of the ice sheet, we are going to lose [the] Greenland ice sheet long-term,” he adds.

The immediate trigger for the heatwave was a shift in atmospheric currents high above the earth’s surface: the North Atlantic Jet Stream, a fast current of wind that blows from west to east, had formed a buckle that was trapping warm air over Greenland. The same pattern had caused a record-setting heatwave in Europe a few days earlier, before shifting over to sit on top of the Greenland ice sheet.

Video: Climate Change: what do you want me to say?

It’s not just Greenland’s weather that is governed by the jet stream. Across Europe and North America, it controls extreme weather conditions of all kinds, from winter cold snaps, to heatwaves, to storms.

As the world gets warmer, the behaviour of the jet stream is one of the most studied and hotly debated mysteries of climate change. Scientists are racing to understand how this current of air is changing as the planet heats up, and whether it will get stronger or weaker — which holds big implications for weather patterns, crop yields and rising sea levels.

“It is essentially the most important weather phenomenon,” says Tim Woollings, lecturer in physical climate science at Oxford university. “If you had to choose only one piece of information to get a handle on the weather in the northern hemisphere . . . then that would be the jet stream, what it is and where it is going.”

July 2019 was the joint hottest month — with July 2016 — ever recorded by modern instruments, according to data released on Monday. This is attributed to the underlying warming of the planet, with burning fossil fuels increasing the level of carbon dioxide in the atmosphere, but also the behaviour of the jet stream, which has brought about some big heatwaves.

Even in cool Greenland, it has been uncomfortably warm. “We are not sleeping very well these days, it’s just too hot,” says Flemming Bisgaard, a pilot and entrepreneur in Ilulissat, a town on the coast of West Greenland, which saw highs above 20C during the heatwave.

While that might not sound bad to European ears, the persistent heat has been melting the permafrost layer under the soil, causing roads to buckle and house foundations to shift, and necessitating expensive repairs. “Thirty years ago, all the engineers said the permafrost would always be there, you can just build straight on the ground,” says Mr Bisgaard. “Now it is a huge problem.”

Globally, an even bigger threat is the amount of water pouring off the Greenland ice sheet as it melts. About 200 cubic km of ice disappeared from the surface of the Greenland ice sheet in July alone, according to Martin Stendel, climate scientist at the Danish Meteorological Institute. That volume of water, if spread across an area the size of England, would stand 1.5m deep.

“It should result in a measurable difference in sea-level rise,” says Mr Stendel, pointing out that Greenland has already contributed about 1cm to rising seas over the past 15 years. The July melt alone would contribute about half a millimetre, he estimates.

The North Atlantic Jet Stream is born high in the atmosphere, more than 7km from the earth’s surface. The temperature difference between the cool Arctic and the warm equator creates a pressure difference, and a narrow band of powerful wind. The turning of the earth makes this strong current — it averages around 170kph — flow from west to east, and helps explain why it is quicker to fly from New York to London than in the opposite direction.

The jet stream was first identified around the turn of the 20th century — early research efforts by scientists even included a few ill-fated voyages in air balloons. Technically there are four jet streams that circle the planet — two in each hemisphere — but the most studied is the northern hemisphere polar jet, due to its central role in European weather patterns. But it was not until the 1980s, and the advent of modern satellites, that really good data on the jet stream and other atmospheric currents became available, allowing measurement of its precise speed and direction.

This relatively short time period is part of the reason why it is so hard to tell how the jet stream is being affected by climate change. Unlike temperature records, which stretch back to the pre-industrial era, there is no detailed account of what the jet stream was doing before human-induced global warming kicked in.

“Often in physics you can write down equations and out pops the answer and everyone agrees, but we can’t do that with the jet stream,” says Paul Williams, professor of atmospheric science at Reading university. Part of the challenge is the chaotic nature of the atmosphere, which would already have a lot of natural variability, such as El Niño cycles, even in the absence of anthropogenic climate change.

The impact of the jet stream on climate change, and whether it will shift in the future, is hotly debated by scientists. It is seen as one of the central issues that will determine how weather patterns across western Europe, in particular, will shift as the planet heats up.

“This is a critically important part of climate science, and one of the least well understood,” says Prof Williams. “We know the climate is getting warmer, and this is settled by now, but it is the consequences of that warming — like the jet stream — that we are just starting to explore.”

One prominent theory is that global warming will cause the jet stream to slow down and become wavier — resulting in more summer heatwaves, among other developments. The jet stream typically helps to keep cool air near the poles and warm air near the tropics, but when it swings out to make a dramatic bend, it can carry pockets of warm air north, cool air south.

“The climate change aspect is contributing to these very persistent, big waves of the jet stream,” says Jennifer Francis, senior scientist at Woods Hole Research Centre, and one of the leading researchers to identify the trend. She believes the natural undulations of the jet stream are becoming bigger and more pronounced because of climate change.

As the planet heats up, she says, warming is distributed unevenly. At the moment, the Arctic is warming much faster than the rest of the world because the decrease in sea ice means the ocean is absorbing more heat from the sun. As the temperature difference between the poles and the tropics narrows, that can weaken the jet stream and cause the swings to be more dramatic, Ms Francis says.

“We think the rapidly warming Arctic is making these wavy patterns happen more often, and as a result we are seeing weather patterns themselves become much more persistent,” she adds, meaning that weather such as heat or storms can be trapped in place for longer. “We are just starting to be able to measure these types of changes in the jet stream because they are so recent.”

Other scientists predict the opposite could happen: climate change could cause the jet stream to get stronger and move toward the poles. Atmospheric models — the complex simulations that run on supercomputers and forecast long-term weather and climate — tend to support this view.

“Most climate predictions suggest a pole-ward migration of the jet, but that is quite a slow process,” says Adam Scaife, who heads long-term prediction for the UK Met Office and is a professor at Exeter university.

If the jet stream over Europe shifts to the north, that would bring milder and wetter weather to northern Europe, with more storms coming to the UK. In the summer, it could mean more settled weather, meaning fewer storms and less precipitation.

“If there are changes to the structure of the winds . . . that could either add to climate change in some regions, or alleviate it in others,” he says, depending on the location. “To get the additional conditions that are crucial for making the temperatures rocket, like clear skies and lack of rainfall, then the jet stream is all important.”

As the world warms, scientists are only now beginning to understand the knock-on impacts of a hotter planet, and what this means for critical atmospheric currents. The changes in the jet stream are something researchers call “non-linear” phenomenon: shifts that can take place suddenly or not at all, that do not proceed in a straight line.

Mr Stendel, from the Danish Meteorological Institute, says this can exacerbate the effects of climate change. “We have background warming, and we have enhancement due to these non-linear effects, like the changes in the general circulation,” he says.

That has major implications for the melting ice sheet and means that sea levels could rise faster than expected. The most recent report from the UN Intergovernmental Panel on Climate Change forecast between 45cm and 82cm of sea level rise by the end of this century if emissions keep increasing. A growing number of scientists think that may be too low.

“That probably underestimates the upper range of sea level rise,” says Mr Stendel. “Here in Copenhagen we are very close to the sea so we have to keep an eye on it.”

As scientists race to solve the jet stream puzzle, the risk is that the models are not able to forecast it sufficiently over the long term, to prepare for the changes it will bring. “One of the greatest triumphs of meteorology is forecasting the weather,” says Mr Woollings, pointing to predictions like whether it will rain tomorrow. “We’d love to be able to do that for climate change too.” 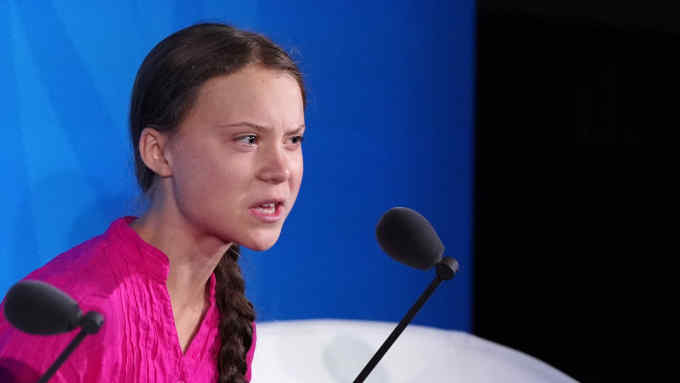