Battle to replace Theresa May gets under way

The race to succeed Theresa May has begun, with senior Conservatives setting out their leadership pitches and alliances less than 24 hours after the prime minister announced her intention to resign as leader of the Conservative party on June 7.

Although the contest does not formally commence for another two weeks, contenders are already outlining their policy platforms.

Some senior Tory MPs are concerned that the campaign will become a Eurosceptic “arms race”, with candidates showing off their pro-Brexit credentials to win over the Tory party’s grassroots membership.

The Eurosceptic tone of the contest was set by Mr Johnson on Friday, who announced he would take the UK out of the EU on October 31 “deal or no deal”, ruling out the possibility of a further Brexit delay. Mr Raab, a fellow Brexiter, will run on a similar platform.

Mr Hancock was a close ally of former chancellor George Osborne and served as culture minister before joining the Department of Health last year. He will run on a platform that a fresh face is required to overhaul the Tory party’s image following years of infighting over Brexit.

News in-depthConservative Party UK
The Tory leadership battle: who could replace Theresa May? 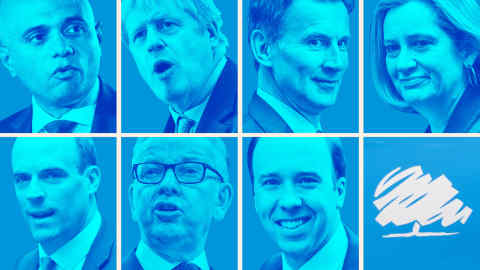 “We need to move on from the horrible politics of the last three years. We need a fresh start and a fresh face to ensure this country wins the battles of the 2020s and remains prosperous for many years to come,” he told the BBC.

On Brexit Mr Hancock said he would pursue “alternative arrangements” to avoid a hard border in Ireland while being honest about the choices “between sovereignty and market access and the trade-offs to get a deal through this Parliament.”

Amber Rudd, a prominent centrist Conservative minister, said she would not be running for the leadership. Instead the work and pensions secretary suggested she would be backing a candidate who campaigned for Brexit during the 2016 referendum.

“I am conscious that the Conservative party wants to have someone who they believe is very enthusiastic about Brexit. I still think it is a difficult job to do but we can do it, we can make a success of it,” she told the Daily Telegraph.

Ms Rudd also hinted that she could support Mr Johnson’s candidacy, stating: “I get on perfectly well with him,” despite their political differences. But Ms Rudd, who is also a leading member of the One Nation caucus of Tory MPs, has been sceptical of supporting any candidate who would countenance a no-deal Brexit. 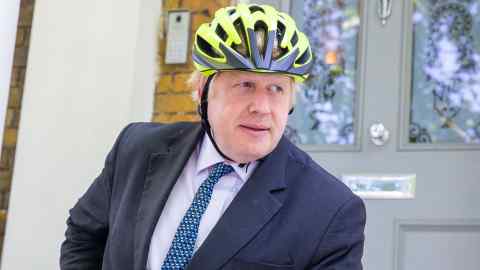 “Boris has to take a tough line to out-Brexit Dom Raab — there’s no surprises in what he said. But I would watch his language very carefully,” said an insider in one of the leadership campaigns. “He wants to leave with a deal and many of his potential supporters are expecting him to walk back from what he said.”

Mr Stewart, another centrist Tory who was recently promoted to the Cabinet, said he could not serve in a government that pursued a no-deal Brexit or was led by Mr Johnson.

“I could not serve in a government whose policy was to push this country into a no-deal Brexit. I think it would be a huge mistake, damaging, unnecessary and I think also dishonest,” he said.

“I could not serve with Boris Johnson and the reason for that is I spoke to Boris two weeks ago about this and I thought at the time he had assured me he wouldn’t push for a no-deal Brexit.”

Video: Brexit: why Theresa May failed to deliver