Why food is on the menu for new office design

Companies are putting food back at the heart of office life to attract and engage employees.

A fading relic, the office canteen was at risk of getting left behind, but expect things to change. Inspired by Silicon Valley tech giants, known for their free food and whizzy chefs, traditional companies are increasingly using food to compete with the tech sector and draw in younger workers.

“The war [for] talent is fierce. There’s been a generational shift — [younger people] want more from work,” says Collin Burry, director at global design and architecture firm Gensler. With this in mind, Google pioneered the revitalising of canteens, with 300 cafés and more than 1,450 micro-kitchens at its offices in more than 50 countries.

“It was a major part of the draw to join [an] organisation so that talent felt taken care of, coddled — and that included food,” says Mr Burry.

This trend has trickled out to more traditional businesses. UBS’s new US wealth management headquarters in New Jersey, for example, runs a cooking school to help foster collaboration and teach employees new skills.

Everyone talked about the death of the office. We missed the point, people wanted a variety

Yet not all workplaces are equal. When Steelcase, the US-based office furniture maker and design group, studied workplaces of companies where more than 100 people worked, it found that 61 per cent have canteens. India has the highest rates (82 per cent), while the UK and US are below average (58 per cent and 59 per cent respectively); Poland has the lowest at 42 per cent.

Trends including working from home have put the canteen’s future into question. But what employees really want is new food options in a more inviting space.

Lee Elliott, head of occupier research at UK-based estate agent Knight Frank, says when he joined the industry 20 years ago, “everyone talked about the death of the office. We missed the point, people wanted a variety. It didn’t happen immediately but in the last five years we have seen a rethink about what the office is.”

Holly Williamson, a director at US design and architecture firm Nelson Worldwide, says: “If there is not a variety of [canteen and food] offerings people won’t come . . . The better we can make the space, the more people will want to come into the office.”

Experts in the field predict developments will be led by three trends: informality, delivery and sustainability.

With cost-conscious employers keen to maximise the use of their canteen space, organisations will increasingly use it for other purposes like meetings and evening functions.

The hotel lobby [is influencing] how we’re designing work canteens

“People want to see the cooking in front of you”, much like in restaurants, says Ms Williamson. This follows a growing interest in eating out as a spectacle and experience, and people want to see “that they’re eating healthy food”.

Making dining areas attractive and comfortable is also a priority.

“We’re trying to create third spaces [like cafés], places to go to, not go through,” says Ms Williamson. “The hotel lobby [is influencing] how we’re designing work canteens.”

Workspaces have “become more influenced by a sense of comfort,” adds Mr Burry. “No one wants their space to look corporate.” Employees can invite guests inside rather than travel to meet them at a café.

If companies start using delivery apps such as Eat Club (specifically aimed at office workers), Deliveroo or Door Dash to bring food to staff, they will need to adapt, in order to accommodate and heat deliveries.

“They need to create reception areas so that the food isn’t sitting waiting,” says Ms Williamson.

However, deliveries risk encouraging people to eat at their desks, which as Mr Elliott points out, “doesn’t play well [in terms of] wellbeing”.

Some apps, such as Ritual, allow office workers to order food to collect from nearby cafés and restaurants. Companies could use their own apps to encourage employees to order from a daily menu that is sent to an in-house kitchen, ready to pick up from the canteen, says Mr Burry. “AI and tech means that companies can tailor the food offering to what people want. There is less waste [and the kitchens] can fine tune the offering.”

Tech companies in Silicon Valley, says Mr Burry, became so “amenity rich [that] they were sucking the local businesses out of business.” Some, such as Facebook, now serve food from local providers as part of the canteen menu.

Some companies, he adds, are demanding that ingredients are sourced within a 500-mile radius.

By contrast, in 2017, Michael Bloomberg made his London media company’s office a “no-cafeteria zone”. His aspiration for employees working in the City of London building, designed by architect Norman Foster, was for them “to get out and enjoy the local economy. We are going in the opposite direction to Google — we encourage people to go outside.”

Mr Elliott also notes the trend for wellbeing, adding that corporate canteens will become increasingly attuned to the importance of catering to a diverse workforce. He sums up the new ethos: “Not meat and two veg, but a variety of different types of food.” 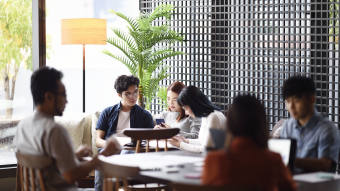