If you think the same, join us
Sovereign bonds

Tommy Stubbington in London and Kate Duguid in New York

The focal point of the global drop in government bond prices has shifted to short-term debt as high inflation spooks investors, who worry that a response from central banks could knock the economic recovery off course.

A surge in global energy prices is sharpening inflationary pressures, leading investors to bet that central bankers will back away from their insistence that inflation is transitory and instead react with higher interest rates.

The result has been a leap in short-dated bond yields — which are highly sensitive to expectations for interest rates — beginning with a hawkish shift at the Bank of England and spilling in to other big bond markets around the world.

“The tone has totally changed in markets,” said Marion Le Morhedec, global head of fixed income at Axa Investment Managers. “Everyone has been surprised by the upside on inflation. It has been quite a massive sell-off since August.”

The UK’s two-year benchmark borrowing costs have soared to 0.7 per cent from as little as 0.1 per cent two months ago, as financial markets price in a series of interest rate rises starting next month.

Two-year US Treasury yields have more than doubled in a month to rise as high as 0.49 per cent as the market has fully priced rate rises beginning in September next year. Even in the eurozone, with its long record of very low inflation, investors have bet the European Central Bank could begin lifting rates as soon as late 2022. Germany’s two-year bond yield has risen from minus 0.78 per cent in August to minus 0.65 per cent.

The reaction in longer-dated bonds has been more muted, particularly when contrasted with the global bond rout at the start of the year. Broadly speaking, investors have shifted from betting on reflation to fretting about stagflation — or at least a combination of higher inflation and lower economic growth that puts central banks in an awkward spot.

Whereas in early 2021 central bankers were expected to tolerate gathering inflationary pressures as economies roared back to life, now markets are signalling concerns that they might choke off growth by overreacting to surging prices.

These worries are most pronounced in the UK, where rates are expected to be higher in a year’s time than in three, according to market pricing — implying rapid rate rises by the BoE would be an error that might soon have to be undone. But a similar, albeit muted, trend has taken hold in other big bond markets.

“The US was actually lagging behind the UK, but now you’re starting to see the 5-year, 5-year forwards beginning to catch up,” said Subadra Rajappa, head of US rates strategy at Société Générale, referring to a market measure of inflation that tracks the expected rate over five years in five years’ time.

Up until early October, short and long-dated US Treasuries dropped in tandem in response to growing inflationary pressures. But since then, they have started moving in opposite directions and the rapid ascent of two-year yields has been accompanied by a decline in 30-year borrowing costs, notes Peter Tchir, head of macro strategy at Academy Securities.

“The market is now telling us if the Fed blinks due to inflation and hikes, they will slow growth,” Tchir said. “That logic would explain why when the market starts to price in a more hawkish Fed the long end of the yield curve rallies, rather than selling off.” 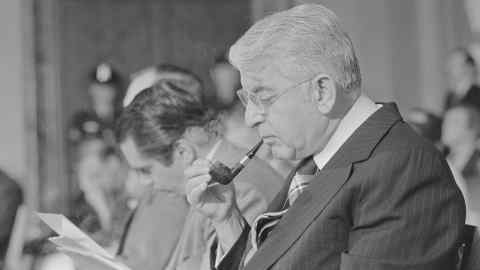 A more dovish Fed that allowed growth and inflation to take hold would be “dangerous” for holders of long-dated debt, he added.

It is also notable, said Chris Murphy, co-head of derivative strategy at Susquehanna International Group, that investors are betting on increased volatility in the Treasury market, while volatility in equities has dropped. The ratio of the Treasury volatility index to the S&P and Nasdaq volatility indices is in the 99th percentile compared to the past two years, Murphy said.

Some investors are sceptical that the flattening of yield curves will continue. In the US and UK, central banks are soon going to be stepping back from their bond-buying programmes at a time when supply of new debt is expected to remain elevated, which should put upward pressure on longer-dated yields, according to Craig Inches, head of rates at Royal London Asset Management. Meanwhile in the eurozone, investors are getting ahead of themselves in pricing rate increases into the front end of yield curves, he argues.

“It’s almost like the market’s fixated on rates but has forgotten” about quantitative easing, he said.

Get alerts on Sovereign bonds when a new story is published