The hair is not solely a matter of aesthetics. Rather, it is a reprieve from the “constant reminder” of pancreatic cancer. A few months ago she was bald, a side-effect of the chemotherapy treatment. She would get out of bed every morning, see her reflection and think, “Oh yes, I have got cancer.” To cheer herself up — and keep her head warm — she wore a range of fancy hats.

We are in a meeting room at the London office of WorldRemit, the digital international remittances company she co-founded in 2010, which now employs 800 people. When she received her diagnosis, Ms Wines had already stepped down (in 2017) from the day-to-day business — “It was hard for me as well because it’s my baby.” Nonetheless, she wants to continue her portfolio career: as a non-executive director at WorldRemit, speaker at tech conferences and on fintech entrepreneurship at the Cambridge Judge Business School; mentor to young entrepreneurs and adviser to Beam, a crowdfunding platform for homeless people.

She wants to demystify cancer. “I’m prepared to talk about it to anybody. I don’t want to force it down people’s throats but if they want to ask me, then I’m quite open.” Otherwise, Ms Wines says, people are ignorant of symptoms and make assumptions about those with cancer.

Businesses need to prepare for cancer, she says, as it is so common. Last year, research by Macmillan, a charity that offers support to people affected by cancer, found 87 per cent of UK employees with cancer say they want to work. Under equalities legislation in the US and UK, cancer is classed as a disability, requiring employers to make adjustments. Macmillan finds that 27 per cent of employed cancer patients say they received no support to help them return to work while 20 per cent faced discrimination, for example, their employer not making adjustments to their workload.

Health
Living with cancer: how going back to work can help 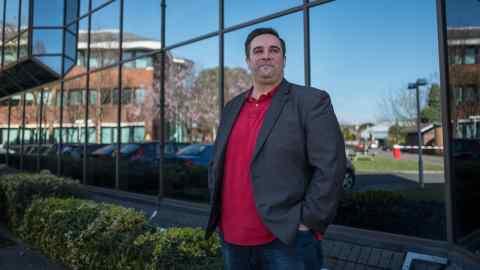 Liz Egan, lead of Macmillan’s Working Through Cancer Programme, says that the physical impact of cancer varies. “Side effects of treatment may affect someone’s ability to work, but it’s impossible to predict how someone could react to treatment until they start. It also depends on the type of cancer someone has and their job.”

Ms Wines was accepted on to a drugs trial (Nelfinavir), which was accompanied by four months of chemotherapy and then a course of chemoradiotherapy over six weeks. Unfortunately the tumour has not shrunk sufficiently to operate on, so she is about to embark on another course of treatment.

“You can live a normal life, as normal as possible . . . Obviously, you’ve got to adjust but you don’t have the plague.”

Because she is no longer involved in the day-to-day running of WorldRemit, she has been able to manage her time, ensuring she does not overload her days. During treatment she made sure she had time to rest. “With chemo, you find out very soon a pattern of which days you are likely to be more tired.”

She tells managers to take their lead from employees, for example, by finding out if they want to share their diagnosis with others. The main point, she says, is to help the “person manage their time and [give] the support they need” and treat colleagues sympathetically. “Most of us want to try to lead as normal a life as possible.”

Originally from Paris, Ms Wines has lived in the UK for 42 years. She had always said that on the day she was not hungry she would know there was something wrong. So when she lost her appetite last year, she went to the doctor. (Other symptoms of pancreatic cancer include abdominal and back pain, or changes to bowel habits.) After a series of tests, doctors discovered Ms Wines had a large tumour on her pancreas, an organ that she knew nothing about.

“Obviously, I was shocked,” she says with understatement.

Previously healthy, it was the first time in her life she felt out of control and had to stop herself from constantly googling her symptoms and illness. “You’ve got to be really strong sometimes not to let the internet take over.”

While describing the diagnosis as “an emotional rollercoaster”, her principal attitude has been to tackle her illness like a work project — gather information, prepare and keep busy. Beyond work, she enjoys small moments, like a text, a call, meeting friends, or going for a walk in the park. “I can’t say it’s perfect every day. Some days it hits you.”

One perk of the weight loss, she jokes, is the cheese. “When you put on weight very easily you are careful with all the camembert. I love cheese, being French.” The “worst time” has been waking in the middle of the night, alone with her thoughts. “It’s thinking, OK, how long have I got? Am I not going to be able to do this? What am I going to miss. The uncertainty . . . Will I suffer at the end?” To combat the insomniac whirring thoughts she has brought a television into the bedroom.

Ms Wines, who is divorced and has no children, has found great support from friends, although some reactions have been tricky. “I’ve been in situations where . . . people have burst into tears and I’m saying, ‘There, there, you’re going to be OK.’” She has co-ordinated friends and colleagues into WhatsApp groups so she does not have to update people individually.

After diagnosis, she has been sure to reinforce to her mentees the need to make time for life outside the office. She has no regrets about spending so much of her life at work — typically at the office from 7am to 10pm, as well as weekends. “I’ve always been a workaholic but at the same time I’ve always had the attitude of if it’s just small things, to always enjoy a few things.” On Sundays, she says, “I meet friends and we go swimming and we have coffee afterwards and I’ve done that for the past 20 years.”

Work has opened opportunities. “I’ve been really lucky. I’ve done tremendous things in my life. WorldRemit has been one of those but I have travelled the world. I’ve seen places at a time when they were changing. I travelled a lot in eastern Europe and China and Africa when there were a lot of changes, back in the early 1990s.”

Regret is a waste of time, she says. “If you have regrets you become bitter and that affects your life and what’s the point because you’re making yourself unhappy . . . You learn from it and you move on.”

She is less nervous about the new course of chemotherapy because this time she knows what to expect. Uncertainty and venturing into the unknown has been incredibly difficult. The hardest aspect of the treatment is the fatigue. “Your body is really weak and drained. Even sometimes getting up and walking is hard work and you have to force yourself to do it.”

I say that the language of fighting cancer is problematic as it can seem that losing the fight is a weakness rather than a biological process. Language is a personal choice, she says. “It is a battle. I don’t know what’s the outcome. If the chemo doesn’t work then I know that it’s a matter of time. If I’m going to have a short life, then [I hope] to enjoy it as much as I can and do as much as I can with the time I have, which I hope to be as long as possible.”

Pancreatic Cancer UK’s new campaign is urging the UK government to produce a plan to give people with the condition a fair chance of survival: www.demandsurvivalnow.org.uk