Teaching sustainability: how MBAs are combining mainstream with green-stream

Meir Wachs knew before he applied to Oxford university’s Saïd Business School that he would probably launch a business after completing the MBA programme. “I started my first company when I was 20,” says the 32-year-old American. “One of my goals going into Saïd was to find another opportunity.”

What Mr Wachs did not anticipate was that his new venture would be a social enterprise. Routemasters, the company he co-founded with a classmate, uses anonymised data from mobile phone signals to help municipalities in developing countries improve their public transport systems.

For that he credits Saïd’s teaching on the UN’s Sustainable Development Goals (SDGs) through a core course on its MBA programme called “Global Opportunities and Threats: Oxford” (Goto).

Mr Wachs says the idea was sparked by a discussion with a fellow MBA student, a Nigerian: “[He] was talking about the struggles people in his country have with transport and that travel there had become a nightmare. We realised there was an opportunity and turned our Goto project into a plan to help cut CO2 emissions in transport systems. It was a serendipitous moment.”

Responsible and ethical leadership is a critical issue for MBA students, according to Tomorrow’s MBA, an annual survey by education market research consultancy CarringtonCrisp.

In its latest study, of 600 prospective business school students, 70 per cent named ethical leadership as important to business education teaching and research. The next most important factor was diversity and equality, named by 67 per cent of respondents.

Students want some exposure to not-for-profits or NGOs as part of their MBA, whether that’s a project or a placement

“Future students tend to see responsible leadership as a fundamental aspect that runs through business education teaching and research, not as a specialist add-on or elective,” says Andrew Crisp, CarringtonCrisp co-founder.

They want “exposure to not-for-profits or NGOs as part of their MBA, whether that’s a project or a placement”. Further, Mr Crisp says, a larger number of students than previously are going into careers in the not-for-profit or NGO field.

At the same time, the shift towards MBA students moving into social enterprises or non-governmental organisations (NGOs) that seek to promote sustainability or ethical business practice appears to be a measured one.

According to Mr Crisp, many students “are still following traditional careers . . . in part driven by the need to pay back their costs of study”.

Goto is a mandatory part of Saïd’s MBA curriculum. It was launched seven years ago by Peter Tufano, the dean, as a way of ingraining the 17 SDGs in the school’s teaching programme.

Each year the course focuses on a different SDG, using tutorials and sessions on skills development to encourage students to develop a project to tackle the problem. This year the students are looking at climate action. Previous topics include the future of work, demographic change, water management and markets, and the future of energy.

“It is a significant part of the MBA and executive MBA experience at Saïd,” says Peter Drobac, director of the Skoll Centre for Social Entrepreneurship at Oxford and co-convener of the Goto programme this year. “Regardless of the industry they go into, students will be impacted by it.”

Other schools take different approaches to the teaching of sustainability, not necessarily making it a core course module.

In Spain, IE University, which is the FT’s partner in Headspring, an executive development venture, has launched a “10-Year Challenge” campaign, with a commitment to spend €10m over the next decade. One feature of the campaign is that the institution improve its sustainability.

The university provides 1,800 hours a year of teaching related to sustainability for its graduate and undergraduate students. Its goal is to double this by 2030, by which time it aims to have made the entire institution itself carbon neutral.

The school’s MBA students develop social innovation impact projects as part of their studies. These can be aimed at making a positive impact on a company, community or society.

Most of these MBA students are focused on accelerating their careers in the corporate world, according to Shuo Xing, a director of talent and careers at IE, who manages social impact and international development projects. But, she adds, while engaged in for-profit ventures, they may also be looking for opportunities to further the sustainability agenda.

“This new global agenda has brought the private sector and non-profits closer than ever, generating new career opportunities,” she says.

UN agencies, she notes, are looking for MBA candidates “to help with digital transformation, monitoring and evaluation, and private-sector engagement strategies”.

Routemasters, the venture Mr Wachs co-founded, used support from Saïd’s incubator facility for early-stage ventures. It now has its own premises and six staff, based in Oxford.

It has developed software to process data on how people move in given locations and is in discussions with a number of city transport authorities in Europe, Africa and North America about using its systems, Mr Wachs says.

The business has not started charging for its services but, he adds, if it becomes a viable venture, a considerable part of the credit will be due to his MBA experience at Saïd.

“The business school provided the sandbox where these kinds of entrepreneurial conversations occur,” Mr Wachs says.

Explore the Special Report
READ MORE
Are academics lagging in debate on future of business? 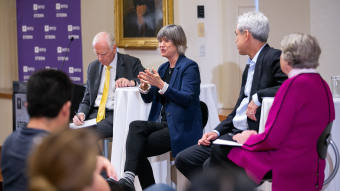