Occidental Petroleum has won agreement from the board of its rival Anadarko Petroleum for its $56bn bid, clearing the way for a significant consolidation of the US oil industry, after Chevron dropped its lower competing offer.

Anadarko’s board said on Thursday evening that it had signed a definitive agreement with Occidental for a cash and shares deal that it expected to close by the end of the year.

Fears that Occidental could be overpaying for the acquisition drove its shares to a ten-year low at $56.33 on Thursday evening, down 6 per cent on the day. Anadarko shares fell more than 3 per cent to $73.39.

However, Anadarko suggested it was confident the deal would go through, in spite of the concerns expressed by some Occidental shareholders. Occidental has secured financing for the cash component of the offer, which is almost 80 per cent of the value of $75 per Anadarko share, and it does not need to put the deal to a vote of its shareholders.

Al Walker, Anadarko’s chief executive, said in a statement: “We are pleased to have reached an agreement with Occidental that delivers significant, near-term value to our shareholders.”

This was an excellent opportunity for us, but it was not a necessity at any price. We simply are not desperate to do a deal

Earlier in the day, Chevron said it would not increase its offer for Anadarko Petroleum, walking away from the $48bn deal that the two companies had agreed last month, saying a higher offer was not in shareholders’ interests.

Anadarko said it had paid Chevron the $1bn break fee included in their takeover agreement. Chevron intends to return the cash to its shareholders, increasing its planned share buyback from $4bn to $5bn.

Vicki Hollub, Occidental’s chief executive, said the deal was an “exciting transaction” that would create a company with “industry leading free cash flow metrics”. She added that the acquisition would further establish Occidental’s ability to deliver annual production growth of 5 per cent through investment in projects with high returns.

The company said that it was confident of being able to retain an investment grade credit rating, despite the debt it is taking on to finance the deal. It plans to sell assets worth $10bn-$15bn to help reduce its borrowings if the deal goes through, and has already reached a provisional deal with Total of France to sell it Anadarko’s operations in Africa for a net $8bn.

Michael Wirth, Chevron’s chief executive, said: “This was an excellent opportunity for us, but it was not a necessity at any price. We simply are not desperate to do a deal.

“The deal we negotiated with Anadarko was a good deal with real synergies and a good strategic fit. But we are not going to chase it to a point where it erodes value for shareholders.”

He added that in a capital-intensive commodity business such as oil and gas, success or failure could be determined by how efficiently companies invested, and Chevron was “a disciplined steward of capital”.

One of Anadarko’s most prized assets is its position in the Permian Basin, the heartland of the US shale oil boom in west Texas, where it has drilling rights on about 250,000 acres.

Chevron has set out plans for rapid growth in the Permian region, taking its production from 391,000 barrels of oil equivalent a day in the first quarter of this year to 900,000 boe/d by the end of 2023. Mr Wirth said it was still on course to achieve that growth even without Anadarko’s assets.

Andrew Brooks of Moody’s, the credit rating agency, said that as a result of the highly leveraged deal Occidental would probably be downgraded to “a weakly positioned investment grade rating”.

Occidental shareholders do not get a vote to decide on the deal after the Houston-based company changed the structure of its offer for Anadarko by adding more cash. 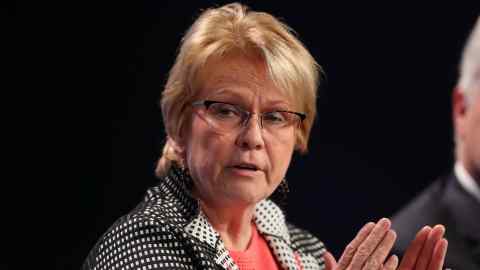 Nevertheless, some Occidental shareholders plan to express their disappointment by voting against the company’s board at the annual meeting on Friday.

T Rowe Price, which owns about 3 per cent of Occidental, making it the seventh-largest shareholder, told the Financial Times that it intended to vote against the board.

“We have significant concerns about the proposed deal,” John Linehan, portfolio manager at T Rowe Price, said on Monday. “Occidental’s management has characterised this deal as a ‘transformational deal’ and we feel that any such deal should be put to a shareholder vote.”

He added: “Absent that, our only option is to register our displeasure through our proxy vote at the annual meeting. We feel that Occidental’s actions have left us no choice and our current intent is to vote against the board at the meeting.”