Morgan Stanley’s $13bn takeover of ETrade means the “door is open” for “more ambitious and aggressive” acquisitions by US banks, Jamie Dimon, JPMorgan Chase chief executive, said on Tuesday, adding that there were a “lot of reasons” for banks to do deals.

The head of America’s biggest bank by assets said his own institution was banned by regulation from buying other US banks but would be “open minded” about other businesses that “make us a better and stronger company”.

JPMorgan, which was forged through a succession of acquisitions, made its most recent notable acquisition last year, when it agreed to pay more than $500m for healthcare payments group Instamed.

Morgan Stanley’s ETrade deal, announced last week, was the largest post-crisis acquisition by a big global bank, and some experts suggested that regulators’ approval could inspire other banks to make similar moves.

“The door is open for people to be a little more ambitious and aggressive on how they deploy capital for acquisitions,” Mr Dimon said of the significance of the deal at JPMorgan’s investor day.

“There’s a lot of reasons you’re going to see mergers in the US, both bank to bank and people trying new disruption strategies, buying new fintechs,” he said, adding that some companies would focus on businesses that were adjacent to their own.

Mr Dimon refused to be drawn on weekend reports that his retail bank Chase was preparing to launch in the UK, beyond saying that while he had always argued “normal” retail banking, with bricks and mortar branches, does not make sense overseas, digital-only retail banking might. “We’ve always got [people] . . . thinking about a bunch of stuff and that’s all I’m going to say on that one,” he added. 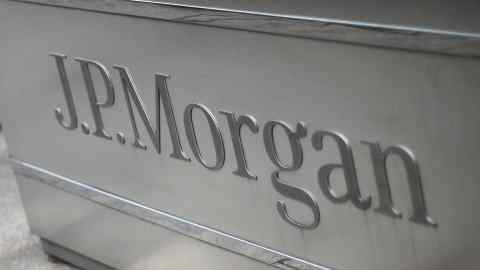 Earlier in the day, Daniel Pinto, JPMorgan’s investment bank boss, said his division was on course for a “mid teens” increase in trading revenues for the first quarter as market activity recovers following a tough period at the start of 2019.

Mr Pinto said the markets business was doing “very well” so far this year, particularly relative to a weak start to 2019. Global markets have seen an uptick in volatility, particularly this week as concerns over the coronavirus outbreak sparked ructions in many assets, including stocks, bonds and commodities.

If the rest of the first quarter is in line with norms for the past two to three years, “the increase year-on-year in markets is roughly in the mid teens”, he added, in the first trading guidance from a Wall Street bank since they reported earnings in mid-January.

JPMorgan Chase told investors it was maintaining its medium-term earnings target, of a return on tangible equity of about 17 per cent, but Jenn Piepszak, chief financial officer, said risks were “probably more skewed to the downside in the near term, given uncertain factors like the coronavirus”.

Still, the bank said it would grow net interest income to more than $60bn a year, up from last year’s $57.8bn, assuming “continued strong growth in deposits and card balances” and that the path of interest rates remained unchanged.