Barney Jopson in Washington and Joanna Kao in New York

Amazon has assembled the biggest lobbying team of any technology company in Washington as it expands into new lines of business and faces a barrage of attacks from President Donald Trump.

The online retailer has doubled its number of in-house lobbyists from 14 to 28 since Mr Trump’s election victory, giving it greater firepower than Google’s 13-person operation and more than Facebook and Apple, which each have eight in-house lobbyists, according to data compiled by the Financial Times.

The Washington expansion comes as Mr Trump has put Amazon in his cross-hairs, firing off critical tweets accusing it of receiving concessionary rates from the US Postal Service and avoiding tax.

Investor angst over a political backlash against Big Tech has risen in recent days, as fears of a White House vendetta against Amazon coincided with reports of a massive leak of personal data from Facebook and concern about the effects of social media on democracy.

By other measures Google remains the biggest tech force in Washington. Google parent company Alphabet is a more free-spending user of “hired gun” external lobbyists and its total lobbying outlay of $18m in 2017 exceeded Amazon’s by $6m.

But Amazon also stands out for a sharp increase in its total lobbying spending since the last years of the Obama administration. Its expenses, including the cost of external and internal lobbyists and any efforts to encourage members of the public to contact policymakers, quadrupled from the first quarter of 2014 to the last quarter of 2017.

“They really had not much of a lobbying presence a few years ago, but now they are dominating the scene,” he said.

In early 2014, Amazon had only three registered in-house lobbyists, according to a Senate database. Now its 28-strong team is far bigger even than the powerhouses of Wall Street, JPMorgan Chase and Citigroup, which have 11 and seven staff lobbyists, respectively.

Mr Trump on Tuesday again criticised Amazon for “costing the United States Post Office massive amounts of money for being their Delivery Boy”.

While the post office reported a net loss of nearly $3bn last year, package delivery for Amazon and others is a relatively robust part of its business and it is illegal for the service to price its parcel deliveries below cost.

One of Amazon’s most recent hires, Katherine Lister, is a former deputy chief of staff at the US commerce department who is now one of eight staff registered to lobby on postal issues.

The company appears to have broken with Washington convention by expanding initially with more in-house lobbyists rather than contracted outsiders, who tend to be more expensive but offer more flexibility.

The FT ViewUS tax
Trump’s grudge against Amazon and Bezos 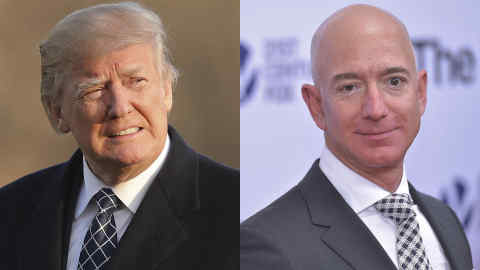 Jeff Bezos, Amazon’s founder and chief executive, owns the Washington Post and Mr Trump has accused the newspaper of acting as a lobbyist for Amazon. The Post says it “operates independently of Amazon”.

The president has also criticised Amazon for killing bricks-and-mortar stores and for paying “little or no” tax to state and local governments. After years of criticism Amazon now collects sales tax from customers on its own sales in 45 states and the District of Columbia, but tax collection by independent sellers that use its platform is more patchy.

Mr Trump’s tweeted attacks on Amazon are not new. He also hit out at the company during his election campaign and last year, but it is only his most recent tweets that have knocked the company’s share price significantly. Amazon declined to comment.