A round of blockbuster bids that pitted the world’s biggest media companies against each other in a protracted fight for supremacy is nearing a conclusion — and Walt Disney appears to be heading for victory.

Comcast’s withdrawal on Thursday from the pursuit of entertainment businesses being sold by Rupert Murdoch’s 21st Century Fox means Disney can finalise a $71bn deal agreed with Mr Murdoch. The purchase will add the Fox movie studio and cable channels, as well as Star of India, to a portfolio of assets that includes Marvel, Lucasfilm and Pixar.

Comcast, the US cable group that also owns NBC Universal, had bid unsuccessfully for Fox but conceded defeat in order to focus on Sky, the pay-TV group Mr Murdoch founded almost three decades ago. Its recent bid of £14.75 a share for Sky values the European media group at £26bn and was recommended by an independent Sky committee that is assessing offers for the company.

But neither this recommendation nor Comcast’s withdrawal from the pursuit of Fox guarantees that Brian Roberts, its chief executive, will get his hands on all of Sky. This is because Disney will ultimately own 39 per cent of Sky, with the stake among the assets it is acquiring from Fox.

Comcast maintained when it launched its first bid for Sky in April that its offer was contingent on it acquiring 50 per cent and one share of Sky. It would like to own all of the company, but Fox and Disney have a binding agreement: the Murdochs cannot unpick their sale to the Mouse House and cut a side deal on the Sky stake with Comcast.

Disney could sell Comcast the Sky stake once it completes the Fox acquisition. But will it? Bob Iger, its chief executive, has referred to Sky as a “jewel” of the Murdoch portfolio. Owning it outright would give Disney a hefty distribution presence in Europe — the company has 23m subscribers — and a new content engine. Given that Disney has ambitions to launch a global streaming service to compete with Netflix there is a strategic rationale to owning Sky, which has already developed a healthy streaming business with its “over the top” Now TV service.

There are other benefits for Disney in owning Sky. It has sophisticated advertising technology and a strong brand. But it is fundamentally a distribution company, which is not Disney’s area of expertise.

Assuming there are no further bids for Sky from Fox-Disney, Comcast would end up owning 61 per cent of Sky, with Disney holding the remaining 39 per cent. The two rivals would be uneasy bedfellows but they have experience of owning a company together: both are shareholders in Hulu, the US streaming service.

This would not be ideal for either company. Owning 100 per cent of Sky would mean the company’s cash flow could be consolidated. It could also be used strategically to cross-sell and promote other services operated either by Comcast or Disney — such as a Disney streaming service, for example.

News in-depthThe Big Read
Sky without limits: the battle for the broadcasting powerhouse 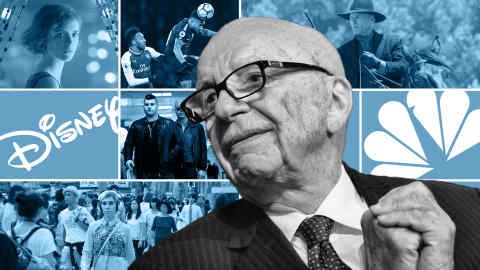 But if Disney wants full control of Sky, and all the indications are that it still does, it will have to back a new offer for the company. Analysts say it has plenty of wriggle room for a new bid, while some of the hedge funds that have taken positions in Sky are convinced the bidding war will continue.

Whatever happens, Disney is back in the driving seat. Mr Roberts is clearly hoping that Mr Iger is ready to do a deal over Sky. If he is not, Comcast will have to look elsewhere for growth outside its core US market. John Malone’s Liberty Global, which has an extensive presence in Europe — it owns Virgin Media of the UK — would arguably be a more sensible acquisition for Mr Roberts. But Sky is his first target. He will have to wait to see how much Mr Iger wants it before plotting his next move.