Chancellor admits dispute with ally has fuelled disenchantment with her coalition

We’ll send you a myFT Daily Digest email rounding up the latest Germany news every morning.

Angela Merkel said she had never contemplated resigning during the row over asylum policy that nearly brought down her government last month, and said she would fulfil her promise to serve out a full term as chancellor.

The German chancellor admitted that the row with her Bavarian sister party, the Christian Social Union, had fuelled disenchantment with politics among ordinary voters. Speaking at her annual summer press conference, she said the tone of the row had been “rough”, and that language used in politics could sometimes “deepen divisions” in society.

However, she also said the issue at the heart of the dispute — the question of whether Germany should act unilaterally on asylum issues or only in concert with other EU countries — was “worth arguing about”.

“It was, for me, a central question,” Ms Merkel said.

The dispute blew up when Horst Seehofer, interior minister and CSU leader, insisted that German border guards be given powers to turn away refugees if they were already registered in other EU countries. Ms Merkel rejected the proposal, saying it would lead to a cascade of border closures across Europe, imperil the Schengen passport-free travel zone and undermine the unity of the EU.

The row threatened at one point to trigger a split between the CDU and CSU, which have been bound in a close alliance for nearly 70 years, and potentially bring down the government less than four months after it was sworn in. 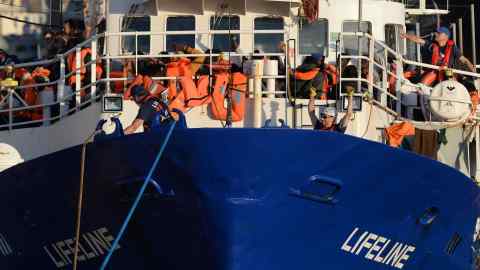 Ms Merkel and Mr Seehofer defused their conflict by agreeing that migrants could be turned back if they have already applied for asylum in other EU countries. However, this can only happen if bilateral deals on such returns are reached with those countries.

The row highlighted the fragility of the coalition she stitched together five months after inconclusive elections last September, in which the CDU/CSU bloc fell to its worst result since 1949. No government in Germany’s postwar history has taken so long to form.

Ms Merkel dodged questions from reporters about her relationship with Mr Seehofer, and about how she can keep him on as a minister after his highly publicised tirades against her. At the height of their conflict, he said he would not let himself “be sacked by a chancellor who I made chancellor in the first place”.

She said only that the dispute over refugee policy had been resolved with a compromise that ensured the government’s “ability to act”.

Yet she also said she was not surprised by poll results that showed the German public remained unimpressed by the government, saying the “harsh tones” of the asylum row had overshadowed achievements. These include a programme to fight long-term unemployment, a newly proclaimed strategy on artificial intelligence and a move to increase child benefit.

Ms Merkel said she had never contemplated resigning during the dispute with Mr Seehofer. “When I’m in the middle of an important discussion, I have to concentrate all my energies on that,” she said. She also said she was prepared to serve out her full term, which ends in 2021.

Asked if she was exhausted, the 64-year-old chancellor said she “can’t complain” — although she was glad she was going on holiday for a few days.