Institutions back sustainability amid growing concerns about climate change and inequality

We’ll send you a myFT Daily Digest email rounding up the latest Letter news every morning.

The University of Chicago has long been considered the epitome of free-market thought. No wonder: this was the intellectual home of economists such as Eugene Fama and Milton Friedman, who championed the pursuit of profit and the doctrine of shareholder primacy which has driven corporate America for nearly half a century.

“In a free-enterprise, private-property system, a corporate executive is an employee of the owners of the business, ” Friedman wrote in a highly influential 1970 essay. “His primary responsibility is to them.”

But today something striking is under way in Chicago, says Randall Kroszner, an esteemed economist who teaches at Chicago Booth business school (and formerly served on the Federal Reserve Board).

While the business school remains a bastion of free markets, it has also started to teach its students about environmental, social and governance issues (ESG) — including the importance of serving “stakeholders” such as customers, employees and communities rather than just shareholders. “We have been changing,” explains Mr Kroszner, who argues that it is entirely wrong to view Chicago today just through the narrow lens of Friedman-style economics.

It is a powerful symbol of a bigger paradigm shift. This year there has been a flurry of excitement in the financial markets and corporate world about the concept of ESG. Indeed, this summer 181 American chief executives issued a collective “statement on the purpose of a corporation”, organised by the Business Roundtable under the leadership of Jamie Dimon, head of JPMorgan.

This document pledged “a fundamental commitment to all our stakeholders” — with an implicit revocation of the idea that Friedman promoted, namely the shareholder-first principle.

But while investors watch the C-suite to see if it can (or cannot) live up to these lofty new goals, what has hitherto grabbed less attention is the crucial role that business schools are playing in this pivot to a more socially responsible model of capitalism.

Take Harvard Business School — an institution that was once viewed as the seminary of the religion of red-blooded, profit-focused American capitalism. Two years ago, Vikram Gandhi, a Wall Street veteran, developed the first HBS impact investing course which he teaches as part of the elective MBA curriculum. “We have written more than two dozen new case studies [for the course],” he says, including entities ranging from BlackRock to private equity group TPG’s Rise Fund and Japan’s government pension investment fund. “We, like others, recognise that ESG isn’t a fad — it’s part of a long-term trend.”

George Serafeim, another Harvard Business School professor, is overseeing a course that explores how companies and consumers can adopt ESG in their own lives. He is also working with financiers such as Sir Ronald Cohen, the luminary of British venture capital, to develop and test a new system of so-called “impact-weighted” corporate accounting to embody ESG in the financial metrics of companies.

New York University’s Stern School of Business has established a special ESG hub run by Tensie Whelan, formerly of the Rainforest Alliance, which offers intensive study on how ESG impacts specific business sectors, such as the auto industry.

Other business schools, such as Thunderbird in Arizona, or Berkeley in California, are also developing significant ESG footprints. In another twist, the Environmental Defense Fund, a non-profit, has run a programme for the last ten years that organises internships for MBA students who want to spend time with companies to help them “go green”. At last count, 1,000 students have participated. “It has been a great way to show the literal value of ‘greening’ operations,” says Catherine Nardone, the fund’s chief development officer.

A cynic might say this is just a bull market phenomenon. Perhaps so: although the ESG sector has boomed over the past few years, it remains to be seen how it will perform in an economic downturn. However, fans insist that a correction in the mainstream markets will actually increase — not undermine — the value of ESG investing as a diversification strategy.

In any case, pressure for executives and investors to embrace ESG is likely to remain sky-high, given the growing public awareness about climate change risks and popular anger about inequality and other social issues. Indeed, these factors are now so prevalent that many corporate leaders — and business school experts — have come to view ESG as a basic risk management concept.

Or as Gandhi of the Harvard Business School echoes: “Our hope is that in 5-10 years our [impact investing] course is redundant because ESG and impact is incorporated into every aspect of the investing process and corporate strategies.” Therein likes the opportunity and challenge for business schools.

Approach to ESG needs to be baked in, not bolted on / From Dr Eban Goodstein, Annandale on Hudson, NY, US

READ MOREResponsible Business Education Awards
Are academics lagging in debate on the future of business? 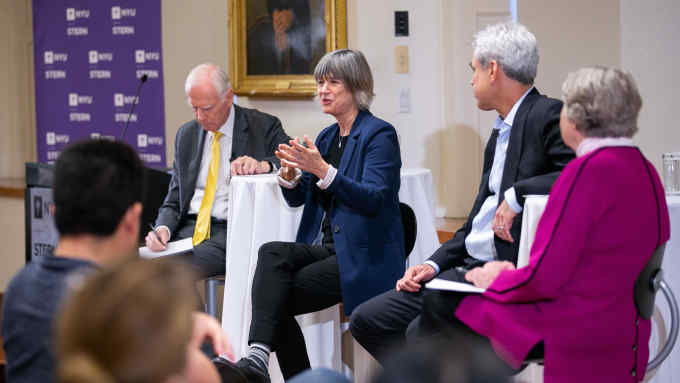