Leadership lessons are one of Chris Nassetta’s favourite topics.

“There is nothing nearer or dearer to my heart than leadership,” says Hilton’s chief executive. We are talking in his office at the hotel company’s headquarters in Arlington, just outside Washington DC.

The statement is not as grandiose as it sounds. Mr Nassetta, 57, has learnt the hard way. In 2009, 18 months into his tenure as chief executive, Hilton was on the brink of collapse, making the $26bn investment of owners Blackstone look like one of the biggest private equity follies in history.

Four years later, Mr Nassetta returned the company to the public markets at a valuation of $2.4bn. As he rang the opening bell that day on the New York Stock Exchange floor, Mr Nassetta, dressed in a white Hilton bathrobe, cried.

Blackstone sold its remaining stake in 2018 for about $1.3bn. Hilton is now worth about $27bn.

Today, Mr Nassetta is ruminating on company founder Conrad Hilton’s “noble premise”. Now in its 100th year, Hilton has 420,000 employees across 114 countries and delivered $8.9bn in revenues last year, but Mr Nassetta says that hotel companies should have a higher purpose.

“[Hilton’s] view was that ‘if I give travellers the opportunity to travel all around the world, they’re going to understand each other and there’s going to be greater cultural exchange, which will lead to a better world’,” he says.

As far as leadership lessons go, Mr Nassetta says that there are two things that “great” leaders should do: “They develop a great strategy and they build a great culture . . . [with both] you really can make yourself pretty bulletproof, and, as a result, have a business that is super resilient.” 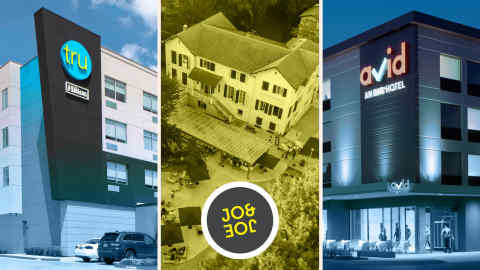 He is proud that Hilton, which has made it to a centenary, is a “rare phenomenon” among S&P 500 companies. It was named the best employer in the US this year by Fortune magazine — the first time a hospitality company has held the title and the first non-tech company since 2004 to top the list.

But in 2007, the picture was not so rosy. When Blackstone acquired Hilton, it bought two separate companies, the US business and Hilton International, which covered the rest of the world. Mr Nassetta says that despite the household name, Hilton was “at the lower end of the pack” and that the two companies actively disliked each other. The culture was apathetic and management was divided.

Mr Nassetta, who knew Blackstone president Jon Gray from his days running the real estate investment group Bailey Capital Corporation, was brought in to unite the two. Despite initially turning down the job, he was eventually persuaded.

“The more I talked to Jon, the more I realised that this was one of the most extraordinary and unique opportunities that either of us would ever find. And we were right. But there were some times where a lot of people doubted us,” he says.

“I would love to say that I’m brilliant and nobody could have figured it out. The brilliance was listening,” he says.

Mr Nassetta listened but also took drastic action. He fired 80 per cent of head office staff and 90 per cent of the incumbent leadership. He also moved the headquarters to Arlington, Virginia, where he had grown up. Being a chief executive is “not a popularity contest”, he says.

“My call, which was really difficult, was if we didn’t do this, we couldn’t accelerate change. And, of course, we’re owned by private equity and they were incredibly good partners and constructive, but you don’t have 10 years.”

Breaking the news, which he did in person against his HR department’s advice, was “the most difficult day of my career”, he says.

“When I told them what I was going to announce, there were literally gasps. There were people crying. It was horrific. It was a tear-jerker for everybody including me.”

Soon after, the 2008 financial crisis and ensuing recession hit. Hilton had more than $20bn of debt on its balance sheet and faced steep revenue declines as corporates tightened their travel budgets.

The recovery took years. He united employees behind goals such as expanding global footprint and aligning the organisation’s culture, and surveyed them to see that the message was getting through. It is, he says, the most rewarding thing he has ever done, though he has not been without doubts.

“I’ve doubted myself a lot. I think it’s good to doubt yourself . . . one of the most important qualities in humans and in leaders is humility.”

Every Monday morning, Mr Nassetta hosts meetings with his executives where he expects to be challenged. “In a lot of instances for leaders, you don’t get people challenging you because of the role.”

The balance, he says, is making sure that you still show conviction: “You have to be careful . . . you have to move forward with confidence because you have to convince people to follow you.”

What keeps him grounded is his family — he cites his father and wife as mentors — and cooking. Despite spending 80 per cent of his time abroad, Mr Nassetta travels home every weekend, even if “it’s hard on the body”. On most Saturdays, he sends a text to the 40-odd members of his extended family living nearby, inviting them for dinner.

Under Mr Nassetta, Hilton has become leaner. In 2017, the company divested its real estate arm — most hotels are now operated under franchised or managed models — and spun out its timeshare business. And, he adds, the company will “reinvent again”. He mentions changing some leadership, focusing on emerging markets and staying nimble to tackle the challenge posed by Airbnb, which even the Hilton CEO says he has occasionally used.

Above all, Hilton’s “noble premise” is still top of the chief executive’s mind.

“The minute I think that this doesn’t matter, I won’t do it,” he says.

My father. He helped me understand the convergence between your personal life and your professional life. There’s no way of extricating one from the other, and that your basic value system as a person is the value system you should have in business.

If you were not a chief executive, what would you be?

Truthfully, I cannot imagine being anything other than Hilton’s CEO but if pushed, maybe a chef.

My father always said that “getting behind the walls” was the best way to understand a business, which is why I took my first job in the engineering department of a Holiday Inn.