We use cookies (opens in new window) for a number of reasons, such as keeping FT Sites reliable and secure, personalising content and ads, providing social media features and to analyse how our Sites are used.
Manage cookies
Accept & continue
Personal Technology Work & Careers

Panoramic photographs are fun and product launches should make them mainstream

Instead of having to frame a picture or point the lens in the right direction, a 360-degree camera can instantly capture the entire scene. Viewing the right picture in the right way can feel like teleporting to another place.

The “spherical” format opens up creative possibilities, such as the Instagram-friendly trend for “tiny planet” pictures that shrink a panorama into a distinctive orb. Combining the images of two fisheye-style lenses into a single “spherical” photo or video can create an new kind of selfie because the photographer can always be in shot.

When I first discovered affordable 360-degree cameras a couple of years ago, I bought one of my own. But it has spent more time in a desk drawer than in my pocket. I do not seem to be alone in this. Despite the potential for fun and distinctive photography, 360-degree cameras are still struggling to break into the mainstream.

It is not for a lack of support from the big guns of Silicon Valley. Popular social apps such as Facebook and YouTube have supported 360-degree videos for a while now, though momentum has been slowed by the limited take-up of virtual reality headsets. At the Consumer Electronics Show in January, new entrants launched 360-degree cameras but, even if the hardware is improving, much of their accompanying software remains sub-par.

Price, at least, is becoming less of a barrier. These devices started to become more affordable with the arrival of the Ricoh Theta S and Samsung’s Gear 360 a couple of years ago, which both cost about $350 when launched. Older models of the Gear 360 can now be bought for under $100 — a bargain for Galaxy smartphone owners but a price that rather suggests someone is trying to shift excess inventory. 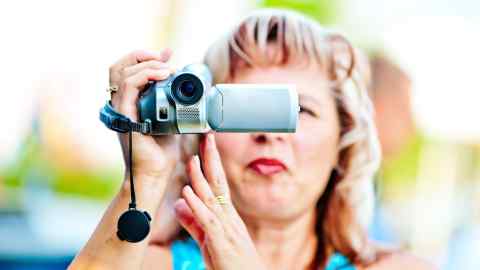 The latest developments suggest that manufacturers think picture quality and video resolution are the main factors holding 360-degree cameras back.

Ricoh has recently launched a Theta V, which shoots video in 4K (also known as ultra high definition). Yi, the Chinese company best known for its affordable yet capable GoPro clones, has gone further with its 5.7K VR camera. Both cost about $400.

In my testing, these offer meaningful improvements in quality over the previous generation of 360-degree cameras, especially in video output. If you are watching inside a VR headset, where the pixels become very noticeable in lower-resolution pictures, 4K video is more or less essential.

But while the images are better, there are still some usability barriers to making 360 degree photos as easy as snapping a regular shot.

For the highest 5.7K resolution video out of the Yi 360 camera, you must connect it to a Windows PC to stitch together the two lenses’ image files into a sphere. While 4K can be processed “in camera” — meaning all the stitching is done before you download the images — relying on a PC is something most of us left behind when we swapped our point-and-shoot cameras for a smartphone app.

The Theta V uses in-camera processing and, for the most part, its stitching is pretty seamless (other 360-degree cameras sometimes leave a blurry line where the two fisheye cameras overlap).

But the wireless transfer to a paired smartphone of even a few minutes’ worth of 4K video can take quite a while and consumes a lot of space in your phone’s memory. The Theta V has 19GB of internal memory, which is quickly gobbled up by about 40 minutes of 4K video.

While the Yi and Ricoh cameras eliminate many of their predecessors’ shortcomings, there is a question that they fail to answer: knowing when to shoot in 360 at all. While it is useful on holidays or at spectacular sights, I have found it hard to find regular reasons to pull my 360-degree camera out of its drawer.

So perhaps the most interesting new 360-degree camera is one that de-emphasises spherical images altogether.

The big innovation from Rylo, a start-up founded by former Apple and Instagram employees, is not in the hardware but its software. Rylo’s $500 device is about the size of a GoPro action camera (much smaller than the Theta or Yi 360) but with a fisheye lens on both sides. Although this is capable of producing spherical video, the clever bit is how its app turns the footage into a traditional “flat” rectangular video.

Rylo has another secret weapon that I wish every 360 camera would copy: a cable for downloading images directly to a smartphone

On a recent trip to Arizona’s Canyon de Chelly, I took a very bumpy Jeep tour along its sandy floor. As we stared up at the canyon’s spectacular sandstone walls, I held the Rylo out of the window as we rolled over the uneven terrain. The video, though, was as smooth and stable as driving on asphalt — only the rolling roof of the 4x4 hinted at what was really going on.

Rylo’s second trick is that it is a computerised camera operator, able to follow a person or object no matter where they move in front of the two lenses. The computer vision software does the framing and the tracking for you so that your dog, child or mountain-biking friend is always in shot, selected simply by tapping on them in Rylo’s app.

I found this worked better on people than parts of the scenery as we drove through the canyon, but the effect still makes it infinitely easier to turn 360-degree footage into something that can be easily watched on a flat screen. Other settings in Rylo’s app allow for instant creation of “tiny planet” videos as well as a “front back” mode that put the two lenses’ output side by side in a traditional frame.

The cost of a Rylo 360-degree camera

Lastly, Rylo has another secret weapon that I wish every 360 camera would copy: a cable for downloading images directly to a smartphone, which is much faster and more reliable than the WiFi or Bluetooth transfers that Ricoh or Yi use.

Rylo’s powerful stabilisation and tracking capabilities are still most useful in sports or action situations where I might otherwise have pulled out a GoPro. But it solves the problem of when to shoot in 360 video by recognising that often it is more interesting to focus on one particular area than survey an entire scene.

If you are still tempted by spherical photography, I do recommend the Ricoh Theta V. However, for an extra $100, Rylo gives you similar 4K 360 video but with a far better app that delivers on the promise of a twin-lens camera.