Lead the way with 50% off
How To Spend It Menswear

These designers want to dress you for Mars

Sign up to myFT Daily Digest to be the first to know about Menswear news.

It takes a certain kind of confidence to put up a huge billboard advert opposite Elon Musk’s SpaceX HQ reading, “Our jacket is ready. How’s your rocket going?” But confidence is what identical twins Steve and Nick Tidball, founders of the clothing company Vollebak, have in spades.

Vollebak is a term used by professional cyclists to mean “going all out”, and that’s pretty much how the 40-year-old brothers go about things. If someone is to walk on Mars any time soon, they want it to be in a piece of clothing either made by them or created by someone who has stood on their shoulders. The space jacket with which they issued the challenge to Musk has a kind of cocoon-like sealable hoodie, designed so that you can sleep in space where the sun never sets. It’s also, unintentionally, not a bad piece of kit to have just now to remain a metre-plus in public places.

Like Elon Musk, they see it as their duty to be disruptors and are, says Steve, “driven by the philosophy of improvement”. “Whether people want to become it or not, Elon is right,” he says.“We are going to become a multiplanetary species and so we’re trying to advance towards intelligent clothing because clothes will be used to make you faster, stronger, live longer, deliver medicines to your body. It’s just an absolute inevitability.” If Musk hasn’t yet responded to their billboard, then Nasa, they say, has. “I believe it was one of Elon’s engineers who sent a picture of it to a Nasa engineer. So we’re exploring opportunities in space with Nasa now,” says Steve.

Steve and Nick (or maybe it should be Nick and Steve; “If I’m Jeremy from Peep Show, Steve is Mark,” says Nick) are creating the kind of clothes that aren’t going to make Armani lose any sleep, but fans include Hollywood “superheroes” and Silicon Valley types, “people in engineering, science and tech. It’s people who are fundamentally interested in whether this is the clothing of the future,” says Steve.

“They’re the people who really like the biohazard button that can seal their Tesla,” adds Nick. “They might never have to press it, but they like the fact it’s there.”

Since founding the company in 2016, they’ve created compostable T-shirts made of algae and hoodies made of pomegranate-dyed eucalyptus; a pair of “100-year pants [trousers] – built to withstand fire, nature, water and the rest of this century”; a ceramic T-shirt using the same technology that coats the International Space Station; a carbon-fibre T-shirt that “acts like a rip-stop to save your skin”; an Indestructible jacket made of Dyneema – the fibre in the ropes that helped raise the Costa Concordia; an Equator shirt with 18 air vents “like built-in aircon”; a solar-charged jacket you can write on with a torch in the dark…

It all sounds fun (“I judge how good an idea is by how fast I can tell my children and how impressed they are,” says Nick. “Do you want to say something mature now, Steve?”). And is cleverly sold. Not for nothing were the twins in advertising together for 13 years. But you’d be forgiven for wondering how useful all this is for most of our day-to-day lives. Nick and Steve want the clothes to be wearable now, of course, but aren’t fundamentally interested in such quotidian questions. What’s important for them is experimentation and staying ahead of the curve. “There’s a saying in technology, which is that you can put it out either too early or too late. That’s it, those are the only two times you ever put out technology,” says Steve. “We put it out too early.”

And so their latest creation to go early, the Full Metal jacket, is woven from copper. Steve explains: “When we started the project, what we were fundamentally interested in is that if you’re going to build intelligent clothing, essentially you need to be able to wire some kind of electronics into that clothing, and those electronics will need to be able to take some kind of reading of your brain, your heart, your kidneys… So, ultimately you’re looking at conductive materials that can store and distribute electricity.” Of course, the jacket can do none of these weird and wonderful things yet, but it is shiny and it is waterproof (for those worried about the danger of lightning strikes, the copper threads are laminated). The point, says Steve, is proof of principle: “We go, ‘Can you actually make a copper jacket? Can someone stitch it? Can someone weave copper thread through looms?’ Once we’ve seen what’s physically possible, then we’re interested in ‘What does it do?’”

Just as they were gearing up to release the jacket, coronavirus locked everything down, but also suggested other possible future uses for the jacket’s technology. As part of their research into copper, the twins had read about its antimicrobial properties. What, they wondered, could they do with that? “The problem with the jacket currently is it’s laminated and we don’t have access to Covid-19 or a lab, so obviously we’ve not been able to put this thing on the jacket and see what it does,” says Steve. “But we’ve proved it is possible to make pieces of clothing that are 65 per cent copper and we know it has all these wonderful properties. Maybe you don’t want it as a jacket. But you may want a mask made of copper or a pair of gloves. That’s where we are. Ultimately, we have to explore entire clothing systems made out of copper that don’t make you look like the Tin Man from The Wizard of Oz.” 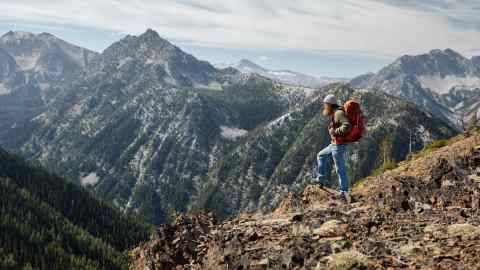