A preliminary investigation by the European Commission has found Andrej Babis, the Czech prime minister, in breach of conflict-of-interest rules, and the Czech Republic could have to repay EU funds as a result, according to a media report.

Hospodarske Noviny, a Czech newspaper, reported on Friday that the EU audit had found that the prime minister had a conflict of interest for more than two years because of continuing ties with his former businesses.

Mr Babis, one of the Czech Republic’s richest men, has repeatedly rejected claims of conflict of interest. He said on Friday that he “strongly rejects this opinion and will fight for it to be changed on the basis of further information from national authorities”.

“The Czech Republic will not have to return any subsidies. There is no reason to do so because I do not violate either Czech or EU rules on conflict of interest,” he wrote on Twitter, adding that the report would now be analysed by Czech authorities.

A number of opposition parties are pushing for a discussion of the topic in parliament next week, and could also push for a vote of no-confidence in the minority coalition between Mr Babis’s Ano party and the Social Democrats.

Mr Babis founded the Agrofert conglomerate and built up an empire stretching from agriculture to the media before going into politics, becoming finance minister in 2014, and prime minister three years later. In 2017, he put his former businesses in trust in order to comply with a new Czech law, dubbed the Lex Babis, on conflicts of interest. 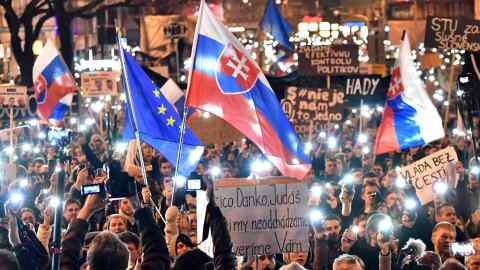 The Czech finance ministry confirmed that it had received a copy of the report, but stressed that it was a preliminary report, and that its contents should therefore remain confidential until final conclusions were reached.

“This . . . is a provisional finding and recommendation by the European Commission auditors, which can be changed on the basis of further information from national authorities,” the ministry said in a statement.

“Of course, in the event that a certain expenditure is ineligible, the Czech Republic has the tools to recover it from the beneficiary.”

A spokesman for Agrofert said the company had not yet been contacted by “any authority” in relation to the report. “We still insist that in the area of subsidies, we are following the law. If the authorities contact us, then our lawyers will analyse the matter,” the spokesman said.

A spokeswoman for the European Commission said it did not comment on “ongoing audit procedures”.

Get alerts on Czech Republic when a new story is published