Confidence in the safety and efficacy of vaccines is greater in poor than wealthy regions of the world, according to the largest survey ever undertaken of attitudes to science and health.

In east Africa, 92 per cent of respondents to a survey commissioned by the Wellcome charity agreed vaccines were safe, rising to 95 per cent in south Asia. However, the figure falls to 59 per cent in western Europe and just 50 per cent in eastern Europe, reflecting doubts about vaccinations and a growing “anti-vax” movement.

The most sceptical country is France, where only 47 per cent agreed that vaccines were safe — a level that varies little with education, age, gender, urban or rural status and even whether the respondents have children. Thirty-three per cent said they were not safe and the rest were unsure.

“An accumulation of factors accounts for French lack of confidence,” said Heidi Larson, a professor at London School of Hygiene and Tropical Medicine, who directed the project carried out by Gallup and involving 140,000 people in 144 countries.

This includes the scandal over HIV-tainted blood transfusions, court cases over alleged adverse reactions to human papillomavirus vaccine and accusations that the pharmaceutical industry acted unethically over supplies of pandemic flu vaccine.

By contrast, the survey found that 99 per cent of Rwandans believed vaccines were safe, and 97 per cent of people in Bangladesh. Prof Larson said this may reflect the fact that both countries had run sustained and successful vaccination campaigns for many years.

Yet even doubters tend to have their children vaccinated. Worldwide, 92 per cent of parents said their children were vaccinated, though in 24 countries the proportion fell below 90 per cent — the minimum needed to confer “herd immunity” on a population for a very contagious infection such as measles. 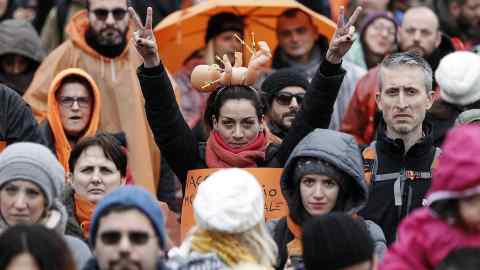 Doubts about vaccines are associated with a wider scepticism about science as a positive force, the survey found. France, for instance, was the only country out of the 144 surveyed where more than half the respondents (55 per cent) think that science and technology will reduce employment in their area.

Trust in scientists is strongly correlated with confidence in authority and in established institutions such as the government, military and judiciary. “This finding should be a wake-up call to people who think of science as something that can be carried out apart from the rest of society,” said Simon Chaplin, Wellcome director of culture and society.

Jim Clifton, Gallup chief executive, made a similar point about health services. “This research finds that 85 per cent of people around the world have strong trust in doctors and nurses but that trust is linked to confidence in national institutions,” he said. “It means the erosion of trust in national institutions is a major threat not just for citizens and societies but for global health too.”

One puzzling finding of the survey is a strong gender difference in self-declared knowledge of science. Everywhere in the world men are significantly more likely than women to say that they know “some” or “a lot” about science — and the gap is largest in northern Europe where 75 per cent of men and 58 per cent of women say they know at least some science.

This gender gap persists when educational attainment is taken into account, leaving the survey’s authors to suggest that the explanation may lie in other factors “such as social norms or levels of relative self-confidence”.

People in the UK are generally more positive about vaccines than their European neighbours, with just 9 per cent of Britons disputing their safety. “I think we are seeing the results of a lot of investment by the government and National Health Service working with the public to promote the benefits of vaccination,” said Mr Chaplin.