A record 10.8m people submitted their annual tax returns by midnight on January 31, with nearly 33,000 filing online in the final hour according to the UK’s tax authority.

Revenue & Customs said the proportion missing the deadline had fallen from 8 per cent last year to 7 per cent. It said not all would pay a penalty, urging those with a reasonable excuse to appeal as it would consider waiving the fine.

Ruth Owen, director-general for customer services at HMRC, said: “If you have missed the deadline, submit your return now to avoid further penalties. We don’t want to penalise anyone, we want tax returns submitted and tax correctly paid.”

She said that while it was “fantastic” that every year more taxpayers were meeting the deadline, HMRC was not complacent. She said: “We want the number missing the deadline to be zero, and we’ll continue to improve the service to make it easier and simpler for all our customers until every tax return is in on time.”

UK tax
Self assessment: ‘appeal against fines for late filing’ 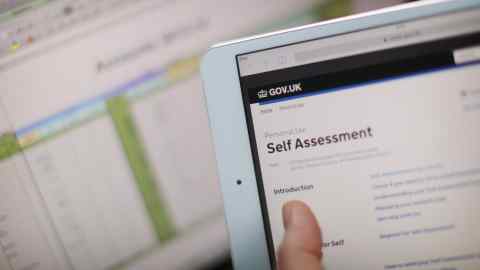 HMRC said a record number of taxpayers submitted their return online, an increase of 330,000 over last year’s total to 9.57m. A total of 768,905 returns were received on deadline day, when the busiest hour was 4pm to 5pm, when it received 60,728 online returns.

HMRC has promised to treat those with genuine excuses leniently, but it rejects feeble claims and might ask for evidence. Legitimate reasons could include flooding, serious illness, bereavement and the failure of a computer while preparing an online return.

In 2015, HMRC said it was considering changing its approach to penalties to “differentiate between deliberate and persistent non-compliers and those who might make an occasional error”. It is now focusing penalties “on those who persistently fail to complete their tax returns and deliberate tax evaders”.

The penalty for late tax returns is an initial £100 fixed penalty, which increases after three months. There are additional penalties for the late payment of tax. HMRC may also charge a penalty if a taxpayer submits an inaccurate return which results in them understating their liability to tax or claiming too big a repayment. Last year, HMRC fined nearly 8,000 more people for deliberate errors on their tax return than it had done a year previously.

HMRC is planning a big overhaul of the tax return when it introduces the first phase of its “making tax digital” initiative in April 2018. Taxpayers will have to report less information, as data from banks and building societies will be pre-populated in their accounts. They will also be encouraged to report information about their income through their digital tax account, in closer to real time, rather than through an annual tax return.

Taxpayers are currently brought into the self-assessment regime if they have income from other sources than employment, for which tax is deducted at source through Pay As You Earn. As well as the self-employed, property landlords and those with one-off income typically have to file a tax return, as well as higher earning parents who must repay some or all of their child benefit.

Get alerts on Tax returns when a new story is published