Sign up to myFT Daily Digest to be the first to know about HEC Paris news.

Six years ago McGill University’s Desautels Faculty of Management took the unprecedented decision for a Canadian business school to raise its MBA fees to a level that would make the course self-funding.

The rise, from C$22,000 in 2010 to C$79,500 by the time of the 2015 student intake, was a risky strategy for the Montreal-based university, which had previously relied on grants from the Quebec government to cover the MBA course costs. However, rather than undermine demand, the almost fourfold increase in fees has seen a rise in the number, global reach and quality of student applications.

This year Desautels is on course for a record number of MBA applications, up 15 per cent on the previous 12 months, according to Don Melville, director of the MBA and masters programmes. Raising the price has raised the perception of the MBA’s value, he says.

“When tuition fees are so far different from other schools, the question is what is wrong,” Mr Melville notes.

Rising tuition fees are an issue, particularly in the US, where students now face paying back six figure sums for two-year MBA courses at top schools, even before other essentials such as books, health insurance and other living costs are factored in. The average fee in 2016 for the top 25 US schools is $118,468 (£81,000) — 81 per cent higher than in 2006, according to Financial Times rankings data.

This inflation is a key reason why scholarships have become a prized method of attracting top talent, often being offered to more than half the MBA year group. While many wonder how much further top US institutions can raise fees, schools in other countries are managing to ramp up their fees by much greater percentages than their American peers, while increasing their popularity.

In Belgium, until caps were lifted recently, universities were barred by law from raising their fees significantly. As a result MBA courses have been relatively cheap, even compared with other European countries.

Tuition fee increases could be seen as a cost saving because they make it easier to sell the value of the course, according to Yolanda Habets, head of Vlerick’s full-time MBA. “With the current price we have to answer fewer questions of whether this is a good MBA or not because the cost makes people see a value in it,” she says. “Before, students were almost suspicious about what was being lost in a lower fee.”

Vlerick needed to increase its fees to cover rising costs, Ms Habets says, noting that wages for top teaching talent, back-office support in the career services department and overseas study trips that have been added to the course have all significantly increased the bill for running the MBA.

Although the cap for degree costs in Belgium has now been lifted, Ms Habets does not expect tuition rates in European schools to reach the levels of US business schools. “What European countries share is a desire to keep education more affordable because it means that education is accessible,” she notes.

A big cost advantage for European schools compared with those in the US, apart from annual tuition fees, is the provision of one-year rather than two-year MBA courses. The fee for Insead’s one-year programme, which took the top place in this year’s FT Global MBA ranking, is €71,000, which despite climbing by about 5 per cent annually for several years remains significantly lower than the two-year courses at the top US schools.

Keeping annual fees within the range of US peers is a factor for a school like Insead, according to Graham Hastie, its assistant dean of degree programmes. However, with a course that lasts only 10 months, even with annual fees as high as Stanford Graduate School of Business or MIT Sloan School of Management, Insead can boast a higher return than the schools with two-year study periods.

Peter Todd, who led the rise in tuition fees as dean at Desautels, was last year hired as dean of HEC Paris. The French school’s MBA tuition fees have also been rising, up €8,000 to €56,000 since January 2013.

However, the strengthening of the dollar against the euro has enabled Mr Todd to claim that his school’s fees are actually becoming less expensive compared with courses across the Atlantic. 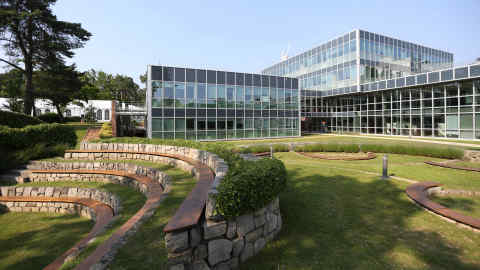 Applications from the US have increased, says Andrea Masini, HEC’s MBA head. But he claims this is a result of people liking the qualities of the school’s course, such as the diversity of the student population, rather than the fees becoming more attractive.

Mr Masini also adds that increasing tuition fees is not a sufficient measure to increase the perceived value of an MBA.

Get alerts on HEC Paris when a new story is published