Whoever replaces Barack Obama will face many difficult choices but few are likely to be as stark as those in the Asia Pacific region. In a 497-page, densely argued ruling this week, an international tribunal in The Hague blew away the legal ambiguity that has long surrounded China’s claim to control the bulk of the South China Sea — one of the busiest trading routes in the world.

How the White House responds to the verdict in the coming months will help define Washington’s relationship with Beijing for years, and dramatically influence the geopolitics of the region.

Washington sees the ruling, issued by the Permanent Court of Arbitration, after a complaint from the Philippines, as a victory for what some US officials describe as a 21st century rules-based order over China’s 19th-century plans for its own sphere of influence. By rejecting so many of the assumptions that underpinned Beijing’s claims in the South China Sea, the tribunal has put it on the spot.

If China continues occupying reefs and developing them into potential military bases — a process that has accelerated since 2014 — it will be acting outside the bounds of international law. The US would then have to decide its next steps and how much military force it is prepared to deploy.

“China has to make a decision — is it going to adhere to the rule of law and act like a world leader with responsibilities, or is it going to go its own course,” says Ben Cardin, the senior Democrat on the Senate foreign relations committee. However, he adds: “They will probably assert their sovereignty by additional island building or military activity.”

In an interview before the court ruling was announced, Max Baucus, US ambassador to China, said one of his messages to government officials in Beijing was that “we’re in a whole new chapter here . . . The old chapter was talk for the sake of talk, agree to disagree,” he added. “We’re past that. The new chapter is [about] actions”.

There are multiple rivalries in the South China Sea and they operate on two levels. A host of islands, rocks and reefs are claimed by China, Vietnam, the Philippines, Malaysia, Brunei and Taiwan, and the disputes combine fishing rights, potential natural resources and national pride.

For the US and China, the South China Sea is more a matter of the geopolitics of sea control. The US Navy has policed the crucial maritime waterway for most of the past 70 years, and believes that China wants to slowly nudge it out of crucial parts of the western Pacific. A dominant position in the South China Sea would give Beijing a platform to exert greater influence over the foreign policies of its neighbours and the terms of economic engagement in east Asia.

The Hague ruling has delivered a significant blow to that project. The five-judge panel ruled unanimously that China does not have “historic rights” to the resources within its infamous “nine-dash line”, which delineates its claim to about 85 per cent of the waterway.

The tribunal also said that none of the land features in the Spratlys archipelago — in the centre of the South China Sea — could be considered as islands, which under international law would give them a 200-mile “exclusive economic zone”. The result — which Beijing contests — sharply curtails its legal claim to control.

For the US, the ruling gives it the chance to demonstrate that the channel is an international waterway where any navy can sail legally — and raises the potential cost for China should it expand its military footprint through further land reclamation. But officials hope the verdict could also provide the basis for a new round of regional diplomacy about the disputes.

Over the past four years, the Obama administration has tried to beef up its presence in the region in order to deter China — a policy known as the “pivot”. Michael McDevitt, a retired rear admiral, says that since 2013 there have been two US destroyers in the South China Sea at any one time.

“The US presence has dramatically increased,” he says.

The US has also revamped its military relationships in the region. Having kicked out US armed forces at the end of the cold war, this year the Philippines opened five bases to US aircraft. Washington is also discussing positioning military equipment for the first time in 40 years in Vietnam, at a base in Da Nang.

At times, Beijing’s island-building has confused the US. It has found it difficult to respond to Chinese “salami-slicing”, where its moves to change the facts on the ground are too small to attract a backlash, in contrast to Russia’s 2014 annexation of Crimea.

The Obama administration has also found itself divided over how strongly it should push back against China, with the Pentagon — and especially Pacific Command — advocating tougher military action to deter further land reclamation. Yet at times, this has been in conflict with other goals, such as securing Chinese support for last year’s climate change agreement.

Before the ruling, China operated in an environment of much greater legal ambiguity. When the US Navy began a series of “freedom of navigation operations”, designed to challenge excessive claims, a senior official said Ashton Carter, the defence secretary, held “dozens of hours of meetings with lawyers, poring over maps”. Yet even then, some US officials believe that the resulting patrols by US ships sent signals that were often confusing in legal terms.

Backed by the ruling, the Pentagon has a much clearer view of the legal status of most of the features in the South China Sea to guide its patrols. “The ruling puts wind in the sails of what the US has already been doing,” says Timothy Heath, a China expert at the Rand Corporation.

But he does not anticipate any drastic changes. “China is not going to leave voluntarily anytime soon and the US does not want a war over this issue,” he says.

The US is likely to encourage allies in the region, such as Australia and Japan, to conduct similar operations in order to emphasise the claim that these are international waters. European allies may also get involved. The UK and France have expressed an interest in conducting South China Sea missions, which they can justify in terms of defending international law.

The Hague’s decision coincided with a Beijing summit between the EU and China. In his formal opening remarks hours ahead of its release, Donald Tusk, the president of the European Council, referred to the “important ruling” that was coming and told China’s premier, Li Keqiang, that “the rule-based international order is in our common interest . . . both China and the EU have to protect it”.

“They were very upset that Tusk raised the matter publicly,” says one person briefed on the talks. “The Europeans have never seen the Chinese side so angry.” A scheduled press briefing featuring Mr Li and Mr Tusk was cancelled at short notice, when the EU insisted that journalists be allowed to ask questions that Beijing officials knew would be dominated by the territorial dispute.

The ruling comes during a US presidential campaign that is creating nervousness among Asian allies about the reliability of American commitments, especially with regard to the pending Trans-Pacific Partnership trade pact.

For many in the region, the TPP is a once-in-a-generation commitment by the US — a reassurance that Washington genuinely see its future tied to Asia. It is for that reason that Mr Carter has said that the agreement would be “worth another aircraft carrier”.

At Home with the FT
US ambassador Max Baucus: ‘We can’t let the Chinese bully us’ 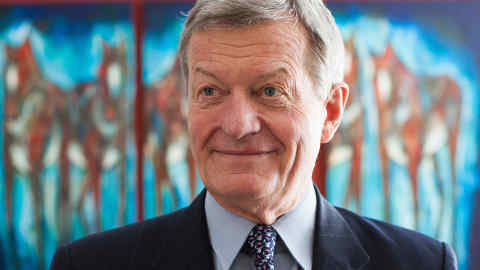 However, TPP is opposed by both the presumptive Democratic and Republican nominees, Hillary Clinton and Donald Trump. Mr Trump has also raised the prospect of pulling US troops out of Japan and South Korea and encouraging both countries to develop their own nuclear deterrent against North Korea — which would substantially undercut the US military position if implemented.

There is also the awkward irony that the US Senate has yet to ratify the UN Law of the Sea Treaty, the basis for The Hague ruling. When it was debated two years ago, some Republican senators warned it could be used to overrule American sovereignty claims — precisely the complaint China is making. As a result, Beijing is refusing to accept the ruling based on an agreement it has fully signed up to, while the US is calling for the enforcement of a treaty it has declined to back.

In the short term, top of the list of potential Sino-US flashpoints is Scarborough Shoal, 140 miles from the Philippines’ coast where China took control three years ago. Earlier this year, the Obama administration delivered private warnings to Beijing not to begin a new exercise in land reclamation. Although US officials refuse to say if Scarborough Shoal is covered by the mutual defence treaty between the countries, some in Washington would like to see a formal declaration in order to deter Beijing.

“I think we should be prepared to take military action in Scarborough Shoal” if China tries to build a new artificial island, says Admiral Dennis Blair, former head of US Pacific Command. “Draw the line there.”

Get alerts on Philippines when a new story is published