When it comes to the baffling business of buying art sales, Frieze — like other fairs — can seem overwhelming. True to form, this year’s fairs have seen some sensational sales. New York-based Van de Weghe gallery found a buyer for a work by the late American artist Franz Kline for a stonking $8m. Also at Frieze Masters (which houses art and artefacts from pre-history to 2000), the Swiss-based rare books expert Jörn Günther sold a unique Book of Hours for €3m. (Art is often transacted in the currency of the vendor or artist, rather than geographical location.)

At the other end of the price scale, in the “Collections” section, Oscar Humphries sold wonderful Japanese vases, some starting at a far more accessible £2,500.

Galleries at Frieze London, meanwhile, will be shipping works across the globe: they report sales to China, Mexico, Argentina and more far-flung destinations. It is almost impossible to pinpoint trends in an offering so huge and diverse, but it’s safe to say that painting dominates the majority of the booths. Collectors, it seems, are eagerly following the trend to re-evaluate fine older women painters: David Zwirner made smash sales well into six figures for Suzan Frecon, Bridget Riley and Rose Wylie (average age: 82).

By contrast, LA artist Calvin Marcus (b. 1988) was a first-day sellout for his gallery David Kordansky, at prices under $40,000. And from a booth that was pure vibrant delight, the riotous colours of Brooklyn-based Eddie Martinez (b. 1977) sold out at Timothy Taylor in the first hour of the fair.

It’s all about sales, of course, but imaginative curation and set-dressing are rewarded with various accolades. The 2018 Frieze Stand Prize, for an outstanding gallery presentation, has gone to Sprueth Magers, whose booth includes Thomas Demand, Kaari Upson, Marcel van Eeden and Jenny Holzer. Meanwhile the Stand Prize in the Focus section — for galleries less than 12 years old — was won by blank (from Cape Town), showing Bronwyn Katz, Donna Kukama and Cinga Samson.

Artists, too, net their share of awards, and this year there’s a new one: the Camden Arts Centre Emerging Arts Prize at Frieze. Its inaugural winner is Hong Kong-born Wong Ping, 34, represented by Edouard Malingue gallery. Wong Ping emerged from the underground scene in Hong Kong in 2014; the Wong Ping Animation Lab creates his wildly coloured, often controversial, shocking-hilarious animation videos. An upcoming show at Camden Arts Centre will be announced soon. 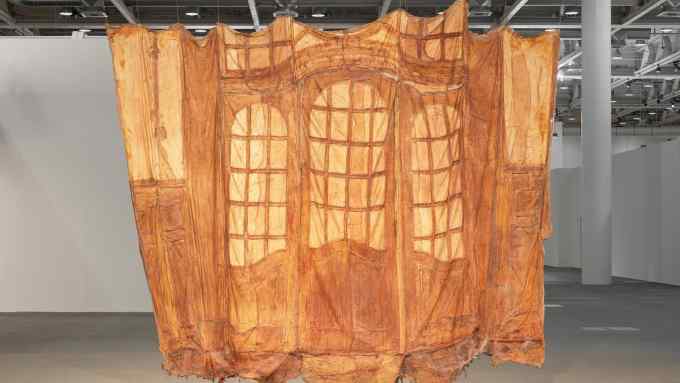