Louise Lucas in Hong Kong and Naomi Rovnick in London

Meng Wanzhou, who is under house arrest in Canada pending possible extradition, has long been seen as a potential successor to her father, Ren Zhengfei, the former army officer who founded the Chinese telecoms supplier Huawei in 1987.

Huawei has described Mr Ren’s story as a classic “rags to riches” tale. The son of teachers in a remote mountain town, he joined the engineering corps of the People’s Liberation Army, and rose to a role “equivalent to deputy regimental chief”. After his unit was disbanded, he set up Huawei with about $3,000. More than three decades later, the group is one of China’s biggest and most secretive companies.

His daughter, by contrast, joined Huawei in 1993, starting as a receptionist and quickly rising through the ranks. When she was arrested in Canada on December 1, Ms Meng, who also goes by the English name Sabrina, was both the company’s chief financial officer and its deputy chair.

In her current role, Ms Meng oversees the finances of a company that employs 180,000 people and generated revenues of Rmb325.7bn ($47.2bn) in the first half of the current financial year. Huawei expects to sell 200m smartphones this year — having overtaken Apple in sales in the second quarter — and aims to spend up to $20bn a year on research and development, after last year spending $13.8bn, or 15 per cent of sales, on R&D.

Many analysts see the job as preparation for Ms Meng, 47, to take over as chief executive from her 74-year-old father.

But Mr Ren has repeatedly dismissed such suggestions, telling the China Economic Times newspaper: “How can one person decide this? Since the day Huawei was founded, it was established on the principle of appointment by merit, not appointment by nepotism.”

In 2013, Ms Meng, who holds a masters degree in management from Huazhong University of Science and Technology, told the Beijing News newspaper that she had won an offer to study abroad but was denied an exit visa because officials had deemed her to be an emigration risk. A Chinese citizen, Ms Meng holds a Hong Kong identity card like her father.

Ms Meng’s arrest was connected to a long-running US investigation into whether Huawei has breached export controls by exporting or re-exporting US technology to Iran, as well as other nations such as North Korea and Cuba, according to two diplomatic sources. The US has now unsealed the indictment.

Former employees of Skycom and Huawei in Tehran describe the business, on their LinkedIn profiles, as having sold and installed high-level design and network solutions for Iranian customers. One states that she was required to know about the equipment of vendors that included US group Cisco. 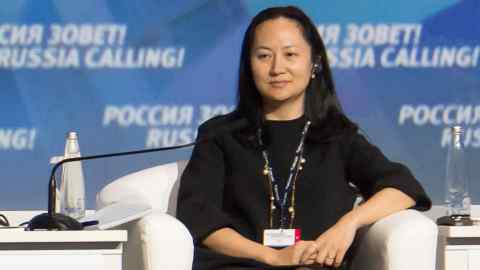 A person with the same Chinese name as Ms Meng served as a director of a Hong Kong company named Skycom Tech Co Limited between 2008 and 2009, according to official filings.

Reuters reported in 2013 that Skycom Tech Co Limited had offered to sell embargoed Hewlett-Packard equipment to Mobile Telecommunication Co of Iran. Huawei responded to Reuters with a statement saying that “the relationship between Huawei and Skycom is a normal business partnership”, and that its business in Iran was “in full compliance with all applicable laws and regulations”.

Hong Kong-based Skycom Tech was voluntarily wound up by its members in June last year in a liquidation process overseen by international accountancy firm BDO.

Additional reporting by Nian Liu and Yuan Yang in Beijing, Nicolle Liu in Hong Kong and Kathrin Hille in Taipei 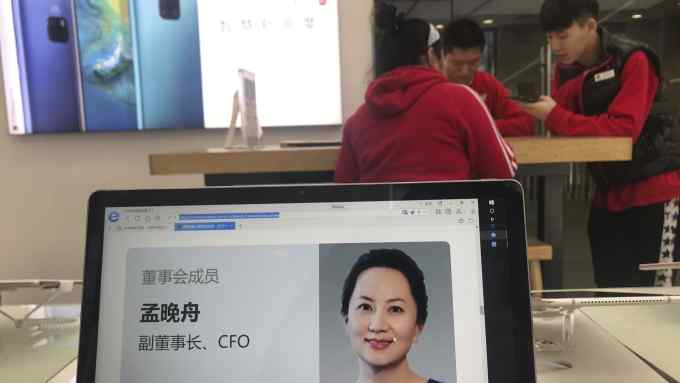