Germany pledges to work with France on limited eurozone reform

Germany’s new finance minister has pledged to thrash out a deal with France on a common backstop for the continent’s banks, after Paris and Berlin began sketching out a package of eurozone reforms to be agreed in June.

Olaf Scholz insisted on Saturday that Berlin shared French president Emmanuel Macron’s drive to reform the currency bloc, saying that progress was “desperately needed.” He cited the strengthening of the euro area's banking union as a priority, arguing that more financial firepower was need to cope with crises.

The banking union was conceived at the height of the eurozone’s debt crisis as a way to restore faith in the bloc’s financial system but has been left unfinished as capitals spar over whether to pool more risks and responsibilities at the European level.

The backstop plans would involve giving new powers to the euro area’s bailout fund to lend money if a bank fails and regulators deem that emergency help is needed to prevent a disorderly collapse.

Berlin is also ready to throw its weight behind other plans to upgrade the fund, the European Stability Mechanism, Mr Scholz said. The European Commission proposed last year to convert it into a European Monetary Fund with broader responsibilities.

But the minister’s remarks signalled a less ambitious set of goals for the June deadline than Mr Macron had originally intended — plans that in large part have received a tepid reception from Germany. 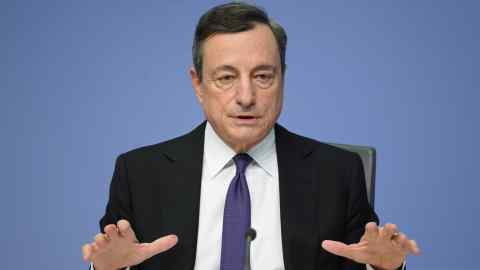 Speaking in Sofia alongside France’s finance minister, Bruno Le Maire, Mr Scholz said that Paris and Berlin were “really working on the task” of a common front on eurozone reform in the next two months. He added that the two sides were “absolutely optimistic that we will succeed.”

France sees the discussions with Germany as a vital precursor to an overall deal among EU governments.

EU diplomats said that Mr Scholz had used the Sofia meeting to make clear that, while Germany was ready to engage on some issues, plans pushed by France, Italy and other governments for a eurozone bank deposit guarantee scheme remain taboo for Berlin.

Mr Scholz told ministers that such a plan, which would underwrite the savings of the bloc’s taxpayers in a crisis, should be a long-term goal for the eurozone project and not part of discussions ahead of EU leaders’ summit in June, according to diplomats.

Germany has longstanding reservations about the project, which it fears would leave its citizens paying for banking failures in poorer countries.

Less ambitious goals may also make it easier to secure a final agreement. Mr Scholz and Mr Le Maire held two hours of talks on Friday to lay the foundations of a deal.

The eurozone is really at a crossroads, and everybody is aware of that

Mr Le Maire raised the stakes on Saturday, saying that failure to strike a deal in June would deal a heavy blow to the reform agenda, as it would be “difficult to give a new impetus to our willingness to build a better eurozone”

Many difficult details remain to be thrashed out in the reform debate, even with the deposit-guarantee scheme on the back burner.

The need for Italy and other countries to do more to reduce their banks’ stockpiles of non-performing loans remains a preoccupation for Germany, which has long said that the problem must addressed before it will consider bold moves to deepen the banking union.

Mr Le Maire said that non-performing loans had featured in his discussions with Mr Scholz.

National officials also expect that the precise arrangements for activating the new financial backstop for the banking union will be another politically sensitive issue. Some governments are concerned that Germany will try and attach too many conditions to the release of any money.

“The eurozone is really at a crossroads, and everybody is aware of that,” Mr Le Maire said.