Welcome to the world of wacky ice cream flavours

A new generation of chefs is making gourmet ices from out there flavours such as roasted potato skin, rocket, Douglas fir and… second-hand books

It was an abundance of Jersey Royals that inspired the spring ice cream offering at Cambridge restaurant Garden House. Admittedly a potato isn’t the most obvious choice for a dessert menu, but chef Adam Wood is partial to a “play on a classic”. Roasted potato skin, he says, has a unique acidity that lends itself perfectly to a traditional ice cream base (milk, cream and sugar). The resulting concoction “undoubtedly tastes of potato, but in an interesting, delicious sort of way,” he adds.

Wood’s flavour combinations might sound unusual – an autumn menu saw him pair mushrooms with salted caramel – but ice cream has long been a medium for adventurous chefs. Before they were a seaside staple, ices were the reserve of the wealthy. “Jellies, sweets, ice cream – these were all once status symbols of the rich and powerful,” explains food historian Tasha Marks, whose own frozen creations have been displayed at Kensington Palace. “Ice cream was a novelty, and because it wasn’t being mass-produced you could try small batches.” (In the 1700s, asparagus and artichoke ices were no less common than vanilla, which was still a rarity at this time).

Today a new breed of chefs is again offering innovative flavours, expert techniques and high-quality ingredients. Consider Skye Gyngell’s menu at Spring, where a trio of ice creams has been a permanent fixture since she launched in 2014. Currently the offering is roasted cherry, rose and melon, but colder months will bring about quince, toasted almond and grapefruit.

Like Wood’s experiment with Jersey Royals, many modern ice creams are simply informed by what’s at hand and plentiful. At Noci, a new Italian restaurant in Islington, flavours – from bay leaf to blood orange – rotate with the seasons. Similarly, in Somerset, Osip proprietor Merlin Labron-Johnson looks to his garden. Earlier this year he closed the restaurant’s tasting menu with a mint, parsley, tarragon and rocket flavour, an accompaniment to a soft Italian meringue. Next he’s trying out tagete (a type of marigold), which adds a “spicy, tropical flavour to ice cream that perfectly compliments a strawberry tart”.

The key to finding the right taste relies on an ice cream’s base. For fresher flavours such as herbs or fruit, a leaner mixture is required to let the delicate flavours shine through; for richer, nuttier flavours, a creamy base is generally fine as long it’s been given the right amount of sugar and churning time to ensure a smooth freeze. “The excessive presence of sugar and fat means you can push the boundaries of flavour,” adds Silo’s Douglas McMaster, whose zero-waste menu has featured flavours including miso, Douglas fir and a buttermilk dulce de leche that’s known as as “‘sex on ice”.

Of course, there are chefs who want to ditch the rule book entirely: Flour + Water in San Francisco is renowned for its parmigiano reggiano gelato, while in Chicago, recent opening Esmé serves a savoury caviar course with a sweet potato, kombu and bonito ice cream. 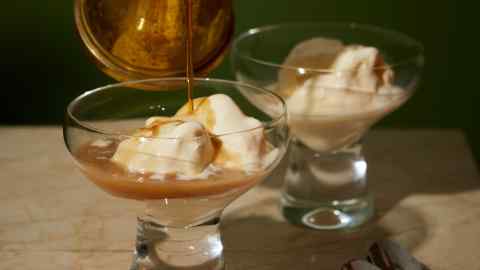 But perhaps the most experimental is Jordi Roca, pastry chef at Girona-based El Celler de Can Roca, and founder of the Rocambolesc ice cream parlour. Both serve playful flavours such as “perfume”, “forest land” and “old book”. The latter is made by using the enfleurage technique (where odourless fats are used to capture fragrance compounds) on second-hand books, immersing the essence in 96 per cent alcohol, then placing the mixture under a vacuum to recover the essential oil. Roca serves the ice cream between sheets of rice bread printed with extracts from Proust’s In Search of Lost Time; naturally the page was taken from a section in which the author recalls his childhood by way of a madeleine. Had it been written in 2022, I’d like to think it would have been an ice cream.