Russian oligarch Oleg Deripaska has won a legal challenge in London to stop rival Vladimir Potanin from increasing his stake in Russian metals producer Norilsk Nickel, in a victory for the embattled tycoon.

Mr Deripaska, who is struggling under US sanctions imposed against him in April, had sought to block a move by Mr Potanin to buy shares from Roman Abramovich, another Russian oligarch, who had acquired a stake in Norilsk as a peace broker as part of a deal to end the long-running feud between the two men.

The ruling marks a new twist in the decades-long battle between Mr Deripaska and Mr Potanin for control of Norilsk, one of the world’s largest producers of nickel and palladium, and one of Russia’s most valuable companies.

The judge said he would give his full reasons for the ruling at a later date.

A representative of Mr Deripaska’s company said: “Rusal is pleased with today’s London court ruling. This completely vindicates Rusal’s decision to challenge the notice.” A spokesperson for Mr Potanin was not immediately available for comment. 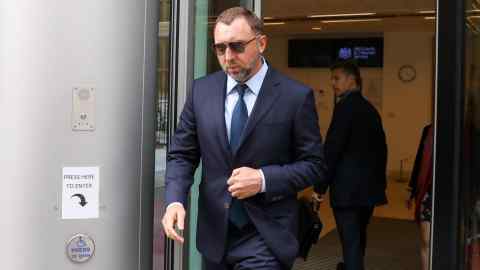 Mr Potanin, also chief executive of Norilsk, controls 30 per cent of the miner. Mr Deripaska controls 27.8 per cent. Mr Potanin had agreed to buy 2.1 per cent from Mr Abramovich in March, sparking the court challenge.

The court on Wednesday ruled that Mr Abramovich did not have the right to sell the shares to Mr Potanin, after Mr Deripaska argued that a 2012 peace deal brokered by the Kremlin to curb the battle between the two men restricted such a sale.

Mr Potanin has said that the battle between the two oligarchs revolves around control of Norilsk’s valuable dividend payment stream, which has been a critical financial lifeline for Rusal. Rusal has denied that the company is seeking to increase dividends, and has said that it has concerns over the strategic direction of the company.

“The news confirms our take that shareholder agreement and more importantly dividend policy will remain unchanged at least by Dec 2022,” said Oleg Petropavlovskiy, a senior analyst at BCS Global Markets in Moscow.

Get alerts on Roman Abramovich when a new story is published