Investment with a sustainable focus is only likely to grow, wealth managers believe

When BlackRock boss Larry Fink announced plans in January to put sustainability at the heart of the world’s biggest asset manager’s investment strategy, there was no mention of the newly-emerging coronavirus in China.

In his annual missive to chief executives around the world, Mr Fink said the $6.47tn asset manager’s “conviction is that sustainability- and climate-integrated portfolios can provide better risk-adjusted returns to investors” as he outlined a radical shake-up of BlackRock’s investment approach.

The move came amid mounting hype about sustainable investing, which has jumped in popularity as investors have increasingly turned their attention to the impact that environmental, social and governance factors have on returns.

But the rapid growth — which came at a time of record highs in stock markets — was also met with large amounts of cynicism, with many sceptics arguing that asset and wealth managers and their clients would rapidly dump ESG investing once markets became volatile again and making profits became harder.

The emergence of coronavirus and its catastrophic impact on economies marks the first real test of just how dedicated investors are to sustainability, or whether ESG is a case of greenwashing, or PR spin.

So far, the cynics have been proved wrong: it is early days, but ESG seems to have met the Covid-19 challenge with flying colours.

“I don’t believe that the Covid pandemic will do any significant or lasting damage to investors’ commitment to socially responsible and environmental investing,” says Mona Shah, director of Stonehage Fleming Investment Management. “Most investors recognise that ESG and maximising profits are not mutually exclusive.”

Amin Rajan, chief executive of Create Research, a consultancy, believes the recent growth of ESG investing is likely to continue, even in a prolonged period of economic uncertainty that potentially offers lower returns. “If anything, it is likely to enhance the appeal of ESG investing once the dust has settled,” he says.

It is a view echoed by wealth managers across the UK, according to a survey carried out by the FT and Savanta, the market research company. Almost nine in 10 wealth managers polled believed that the Covid-19 pandemic would result in increased investor interest in ESG investing. Wealth managers such as Rathbone Brothers, Canaccord Genuity Wealth Management and James Hambro & Partners were among the 35 per cent that expected significant increases, while 52 per cent expected a slight increase.

Only 3 per cent of those polled said they believed interest in ESG would slightly decrease, while 10 per cent expected no change.

‘Part of something much bigger’

A key reason for the expected further rise in interest in ESG investing is that the crisis has shone a spotlight on the role good businesses play in society, says Rob Morgan, pensions & investments analyst at Charles Stanley, the wealth manager.

The pandemic has acted as a “reminder that we are all part of something much bigger and we have to think of others, not just ourselves”, he adds. “That feeling can also be reflected in our investments through socially responsible investing, so there is a direct link.”

Mr Morgan says there has been much discussion about how companies are reacting to the crisis. “There are examples of good and bad practices — and that has served to highlight that companies are part of the fabric of society,” he says.

Companies which have run into criticism include Mike Ashley’s Frasers Group, which briefly tried to keep open its Sports Direct chain of shops, despite a government ban on non-essential retail early in the crisis.

Other businesses have been praised for how they treated staff, or have slashed executive pay to share the burden of the crisis. “Companies are increasingly expected to do good as well as make money. Investors need to be aware of that,” says Mr Morgan.

Even now, the ESG agenda is not without its critics. They say that ESG has significant blind spots and distortions. For example, Vincent Deluard, global macro strategist at INTL FCStone, the financial services company, found that funds with an ESG focus are overweight in companies with few workers. “Despite its noble goal, ESG investing unintendedly spreads the greatest illnesses of post-industrial societies: winner-takes-all capitalism, monopolistic concentration, and the disappearance of jobs for normal people,” he said in a recent report. 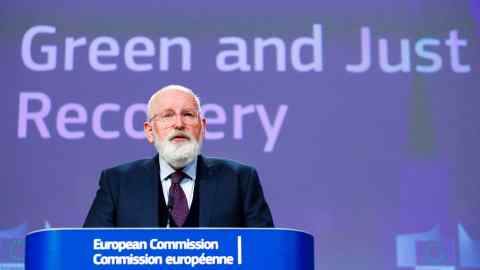 But such voices are becoming rarer. Before the crisis, wealthy private investors were already more likely to invest in companies with high sustainability ratings, according to research from associate professor Amir Amel-Zadeh at Saïd Business School at the University of Oxford and professors Mary Pieterse-Bloem and Rik Lustermans at the Erasmus School of Economics, in Rotterdam.

Their study found that companies with a good sustainability rating received 15 per cent per cent more investment from wealthy investors every month over the years 2016-19, compared to those with a low rating. “Sustainability matters to investors,” says Mr Amel-Zadeh.

In a poll of UK independent financial advisers (IFAs) by asset manager Federated Hermes, more than three-quarters of respondents believed investors would be motivated to divest from companies that have failed to support their employees or wider society through the crisis.

The Federated Hermes survey also found that 85 per cent of UK IFAs had seen a rise in client requests to allocate capital to ESG-integrated funds since the start of the Covid-19 outbreak.

While investors fled many mainstream investment funds during the March sell-off, ESG funds based in the UK had overall inflows, according to Morningstar, the data provider. Investors piled a net £2.9bn into ESG investment funds in the first three months of 2020, making it the second-best quarter for such funds.

The data also show that while net inflows slipped to £348m during March, they recovered fast to £1.05bn in April, a similar level to February.

Across Europe, sustainable funds pulled in €30bn in the first three months of 2020, compared with outflows of €148bn across European-based funds overall. Redemptions of €3.9bn from ESG funds in March turned into inflows of almost €12bn in April, the data show.

Harriet Steel, head of business development for the international business of Federated Hermes, says investors once backed ESG funds because they echoed their moral views, but there is now an increasing awareness that such funds often perform better too. “The crisis has brought into sharp focus that these [ESG risks] are not non-financial issues, they are financial risks,” she adds.

According to research from Charles Stanley, sustainable funds are far more likely to outperform the market than standard funds, whether over one, three, five or 10 years. For example, UK sustainable funds returned 9.1 per cent over the past five years, compared with a loss of -0.1 per cent for funds investing broadly across British stocks, the research finds.

A similar story has played out globally this year, according to research from BlackRock in May. It says sustainable strategies have outperformed during this period of intense volatility, with 94 per cent of a globally representative selection of widely-analysed sustainable indices outperforming their parent benchmarks in the first quarter.

BlackRock itself has shown no sign of backtracking on sustainability. It said in a staunch defence of ESG in May: “During the past few months, we have seen that regardless of industry, strong sustainability characteristics have been essential to helping companies weather the crisis, and investors have increasingly sought out sustainable investment strategies.”

In other words, the pandemic has only enhanced ESG’s investment appeal.